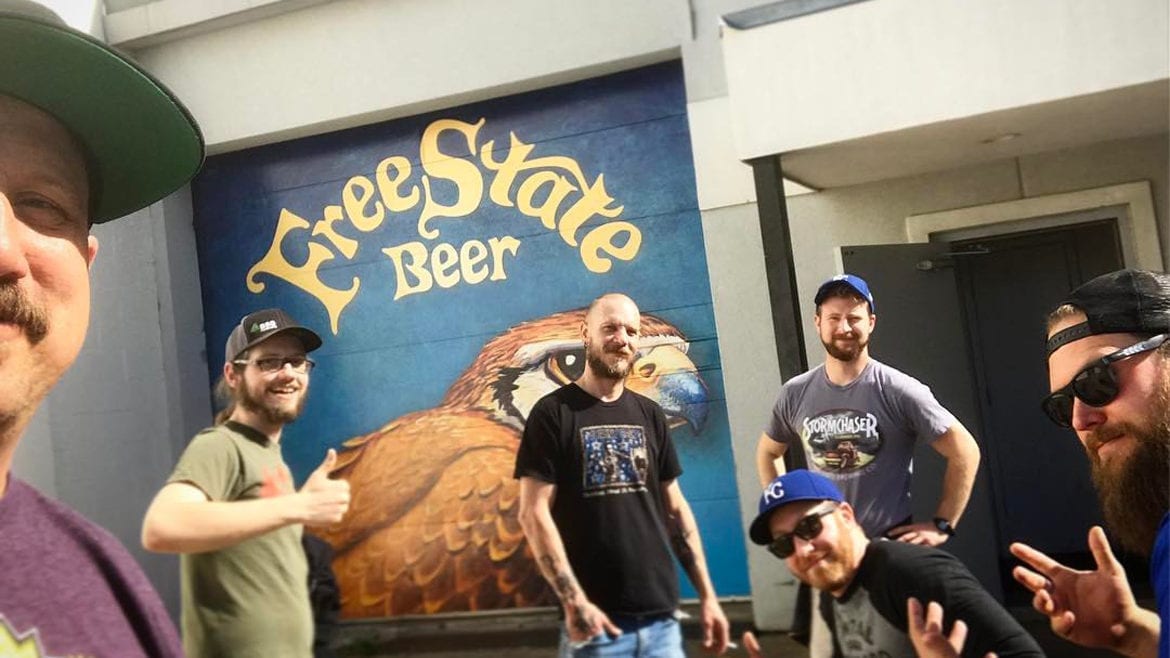 Free State Brewing Company is hoping to convince Kansas to boogie down. The Lawrence brewery collaborated with Wichita’s Central Standard Brewing Company on a new brew slated for release later this week.

Tentatively called Boogiedown Pale, the beer will be unveiled at this year’s Sunflower Boogiedown, a free event at Central Standard Brewing (156 S. Greenwood St., Wichita, Kansas) from noon to 11 p.m. Saturday, May 13. The beer will also be available at Free State’s downtown pub at 636 Massachusetts St. in Lawrence.

“We dry-hopped it with Simcoe and Nelson Sauvin [hops],” said Geoff Deman, Free State’s head brewer and director of brewing operations. “It’s going be nice and tart with notes of passionfruit and lemon. The dark straw color [comes] from a substantial addition of Vienna Malt and some softness from an addition of oats.”

Central Standard’s head brewer Nathan Jackel and co-founder Ian Crane were joined by Vo for a brew day at Free State with Deman and assistant brewer Kevin Prescott. The beer soured in the kettle for roughly 48 hours before they added the lemongrass and additional hops. The fermentation process also yielded what Deman characterized as a “bit of peach-like fruitness.”

Free State Brewing revamped the design of its flagship beer labels and six-pack carriers. The new look, the first revision since Free State began packaging beer in 2009, has the brewery’s Prairie Falcon logo, as well as a corner tag that explains key features of that particular beer.

“The tag turns around the corner and extends onto the front panel, featuring an infographic, outlining the beer’s ABV and relative hop character,” Deman said. “There’s an arch element at the top of the carriers, both side and front, that echoes the façade of our original brewery in downtown Lawrence and prominently outlines our Free State Beer logo.“

At The Bar With Founders Brewmaster Jeremy Kosmicki

Founders Brewing Company’s brewmaster Jeremy Kosmicki swung through Kansas City for the first time last week and shared a few nuggets about his journey from a home brewer to craft-beer influencer.

Kosmicki, a 17-year employee at Founders, began his career on the packaging line at the brewery based out of Grand Rapids, Michigan. As brewmaster, he focuses on the brewery’s research and development program to produce new recipes.

“The market demands new products,” Kosmicki said during an information session and tasting at Bier Station. “We can’t rest on our laurels with All-Day IPA.”

That IPA became a breakthrough beer for Founders and boosted the brewery’s profile among craft beer drinkers. Its low-alcohol level (4.7-percent ABV, 42 IBU) makes it a session beer worthy of its name with enough hop aroma and flavor to add character.

“It was the right beer at the right time. It caught on as a highly-flavored, lower-alcohol beer,” said Kosmicki. “It’s not simple. It’s a gateway beer for hopheads that crossed over with other craft beer drinkers.”

Kaw Point Meadery [recently profiled on Flatland] launched a Kickstarter fundraising campaign to purchase equipment as a step toward opening Kansas City’s first commercial production meadery. Unlike beer made from fermented grain and wine made from fermented fruit, mead is a mixture of honey, yeast, and water, that is fermented to produce alcohol. Daniel Bauer, John Zumalt Jr. and Sam Suddarth have been producing mead in a test facility in the basement of their home and are ready to scale up to a larger operation. Bauer, Kaw Point’s head mead maker, began making mead in 2012.

Join the Young Friends of Art at the Nelson-Atkins Museum of Art (4525 Oak St.), along with community partners KC Pet Project and Community LINC, for a Puppies and Pints happy hour from 6 to 8 p.m. Mingle with young professionals and local brewers on the north Plaza, sample beer, and bring two- and four-legged friends. KC Pet Project will bring several dogs that are available for adoption.

Martin City Brewing Company’s (500 E. 135th St.) seasonal release Purple Train (3.5-percent ABV, 5 IBU), a Berliner-style weisse brewed with blueberries and lemon, will be available in cans and on draft. Pink in color, Purple Train’s aroma of fresh lemon and blueberries is followed by a bit of tartness that settles into slight sweetness with a crisp finish.