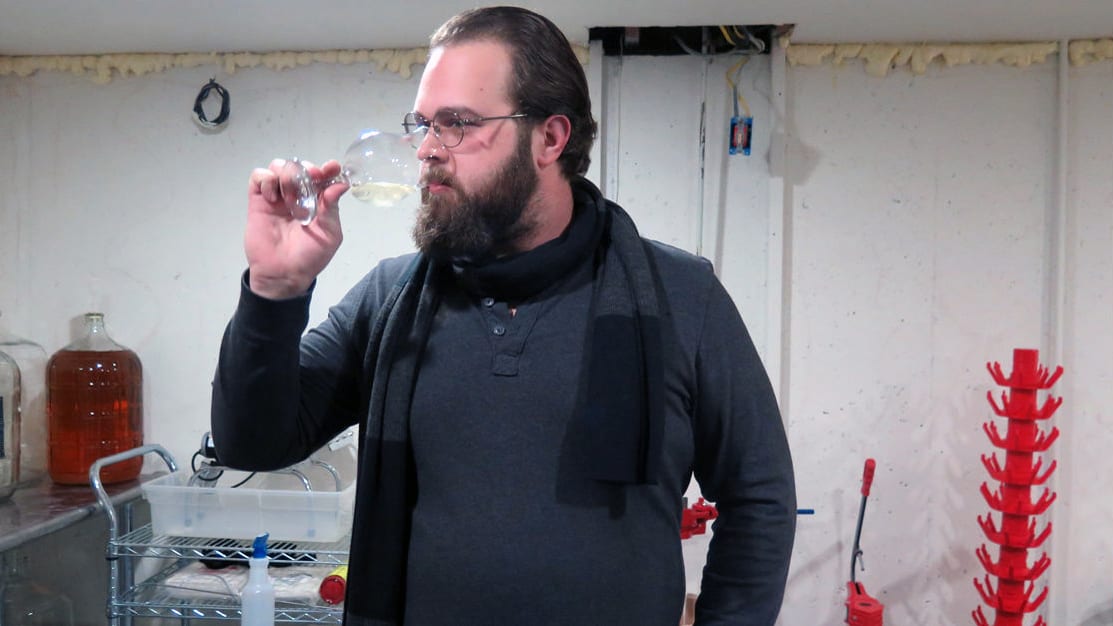 Kaw Point Meadery's head meadmaker Daniel Bauer samples a test recipe. While future plans for the meadery include a tasting room, for now the meadmakers work from a basement. (Pete Dulin I Flatland)
Share this story

In the cool basement of a Kansas City, Kansas, home, Daniel Bauer, John Zumalt, Jr., and Sam Suddarth, are working to perfect a series of mead recipes. This is where Kaw Point Meadery starts and it’s a long journey. Kansas City’s first dedicated mead-making business may not be open until late 2017 or early 2018.

“Honey is the accumulation of a bee’s life and the nectar it gathers from plants growing,” said Zumalt.  “We try to capture everything in a glass and share it with people.”

Mead is a mixture of honey, yeast, and water that is fermented to produce alcohol. Here, in the test production facility they’ve built, they draw samples of various flavored meads out of containers to gauge the mead’s development. A fermentation vessel in a corner quietly bubbles as yeast works to convert sugar into alcohol.

Mead is more complex than its common, dumbed-down identity as a sweet honey wine. Actually, mead may be produced anywhere from sweet to dry, still or carbonated, and low to high alcohol by volume in a variety of styles and tastes. 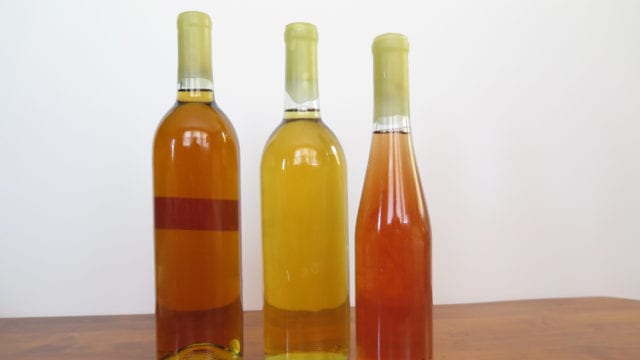 Kaw Point Meadery has a host of meads in development. (Pete Dulin | Flatland)

Mead By Any Other Name

Mead is known by other names when other ingredients are added. The naming gets technical and hard to follow, making it a challenge for consumers and government regulators to understand and classify mead.

Bauer, who will serve as Kaw Point’s head meadmaker, began making mead in 2012 while attending college at Oregon State University, where he studied botany, chemistry, and food fermentation. He brewed beer before trying to make mead, admitting that his first batches were unpalatable.

“Then I met commercial meadmakers at Nectar Creek Mead,” said Bauer, who also attended courses at the University of California-Davis Honey and Pollination Center for meadmaking. “I started making mead at Nectar Creek. When I came back to Kansas City in 2013, there was no dedicated meadery here.”

The idea for Kaw Point Meadery began to form and took flight.

“I messed with making beer from a homebrewing kit and read about mead,” said Zumalt. “I never thought of its potential until Dan came back. I enjoyed making mead more than beer. A hobby became a passion.”

The three meadmakers intend to transform that passion into a business. They have a preliminary building site selected to establish a professional meadery.

“We’re negotiating space, refining our business plan, and figuring out financing,” said Bauer. “We may use crowd-sourcing and investors. It’s a capital-intensive business.”

Future plans for the meadery include a tasting room, First Friday events, and educational aspects about bees, mead, and environmental outreach tied to bees as pollinators. Honey tasting in the tasting room will help customers understand different sources of honey that impact the flavor and properties of mead.

“Clove honey is the most common,” said Bauer. “North Dakota sweet clover honey has a cinnamon quality. Mesquite honey is mild and earthy with light spice.”

Bauer shares a taste of buckwheat honey with the color of dark rum. It tastes like molasses and raisins. Tupelo honey, the title of a Van Morrison song referring to the southern delicacy, tastes like the essence of unadulterated honey. It electrifies sense memories of what honey should taste like in pure form.

“Mostly, we will have semi-sweet clover and alfalfa honey session meads around six percent alcohol-by-volume and carbonated,” said Bauer. “The session meads will always be available.”

“From that clean base, we can add flavors,” added Zumalt.

Other session meads include elderflower, rose, and hopped versions. The rose mead will be made with rose petals for aromatics and rose hips for tartness in the mead’s body. The hopped mead will incorporate citra, mosaic, and a third hop, giving the mead an aromatic, slightly bitter taste similar to a pale ale beer.

A sample of pineapple mead made with mesquite honey floods the senses with the tropical fruit’s aroma and taste. Caramelized honey peach mead aged in a bourbon barrel is still in development. The meadery also  plans to release a class of meads called Pollinator’s Reserve, similar to a reserve wine.

“Our first release will be a wildflower traditional, potentially aged in a Missouri oak barrel,” said Bauer. “We will release it when it is ready.”

Until then, look for samples at Kaw Point Meadery’s booth at KC Brewfest on February 25 at Union Station, and at upcoming craft beer festivals this year.