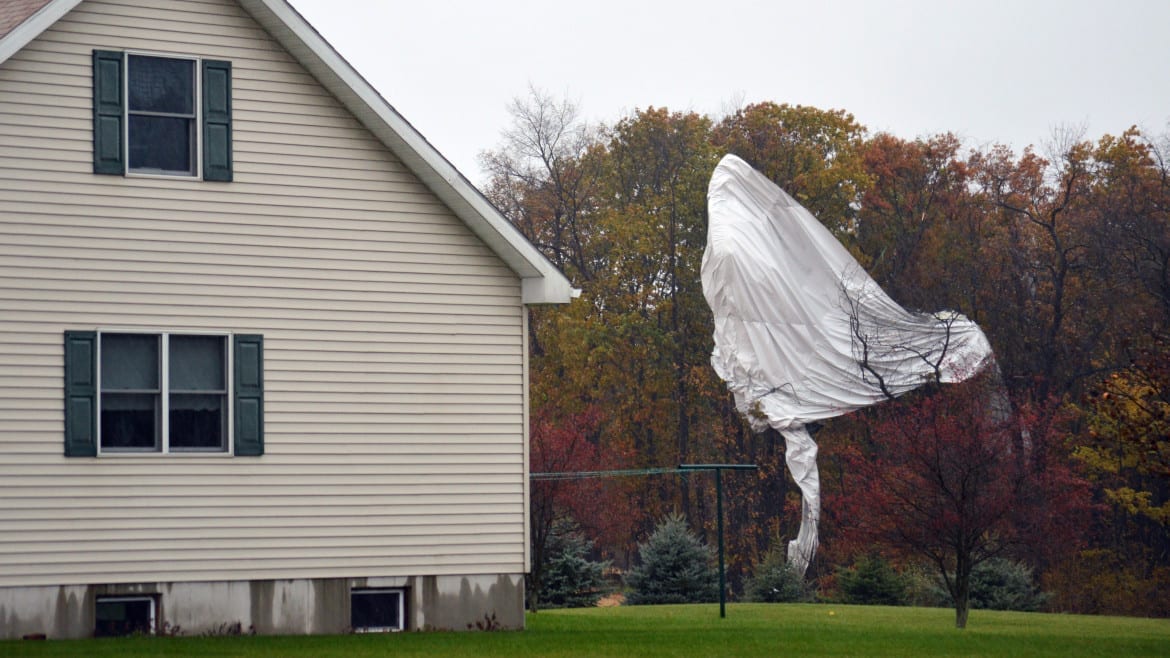 Part of an unmanned Army surveillance blimp hangs off a group of trees after crash landing near Muncy, Pa. on Wednesday, inspiring at least one copycat crime. (Photo: Ken Hunter via AP)
Share this story

According to the state-run Xinhua news agency, China has decided to end its decades-old one-child per couple policy. The change comes to counter a shortage of young people in the Chinese workforce. Gee, who could have possibly seen that coming?

The extinction of big animals including whales and elephants is creating environmental problems, new research finds. According to a report in the journal Proceedings of the National Academy of Sciences, the planet’s composting and nutrient-recycling system is at risk. Certainly, biodiversity loss is a serious issue with profound implications for humankind. But it’s nevertheless hard not to giggle like a 14-year-old school boy at any headline that uses the words “Mega Poop.”

Speaking of Mega Poop, the Republicans held a third presidential debate this week. Many observers said Marco Rubio was the big winner. Virtually everybody thought the big loser was debate host CNBC. Across the political spectrum, the network was roundly bashed by pundits for poor organization and dumb questions, prompting the Republican National Committee to suspend its partnership with NBC News for a planned presidential debate in February. Stephen Colbert had this savage takedown of CNBC’s big mess.

The World Health Organization announced this week that eating bacon is bad for you. Also, the sky is blue. Dryly noting that WHO had received “a number of queries, expressions of concern and requests for clarification,” the organization had to eat crow. No word on whether that’s bad for you, too.

A military blimp broke loose this week. The 243-foot-long helium-filled blimp became untethered from its base in Maryland, drifted to an altitude of about 16,000 feet, and landed safely in Pennsylvania. (No truth to the rumor that Michael Bay bought the movie rights.) In what’s clearly a copycat crime, this giant inflatable pumpkin broke free from a Halloween display in Peoria, Arizona, and drifted though a city park.

The U.S. announced Friday that it will send troops to help fight extremists in the Middle East. Stop us if you have heard this before. Like in 1991. And 2003.

YouTube has launched a subscription option in the United States. The new service, called YouTube Red, will allow viewers to watch content without pop-up ads or commercials. In other words, for only $10 a month you can watch all the cat videos you want and never have to skip the ad in 5…4…3…2…1.

From the too-much-time-on-your-hands file, a taxidermist has immortalized the Michigan State Spartans football win over in-state rival Michigan Wolverines. He did it using stuffed chipmunks. Alvin, Simon, and Theodore could not be reached for comment.

An Oregon teen has been diagnosed with bubonic plague, according to state heath officials. The disease, which appears several times each year in this country, is readily treatable with antibiotics. Which is good because Oregon probably doesn’t have a lot of leeches handy.

The biggest local story this week, obviously, is the Royals’ run for the crown. Governors, mayors, and celebrity fans made World Series bets. Even our local symphony conductor got in on the act. Check out Kansas City Symphony Conductor Michael Stern announcing the bet here: