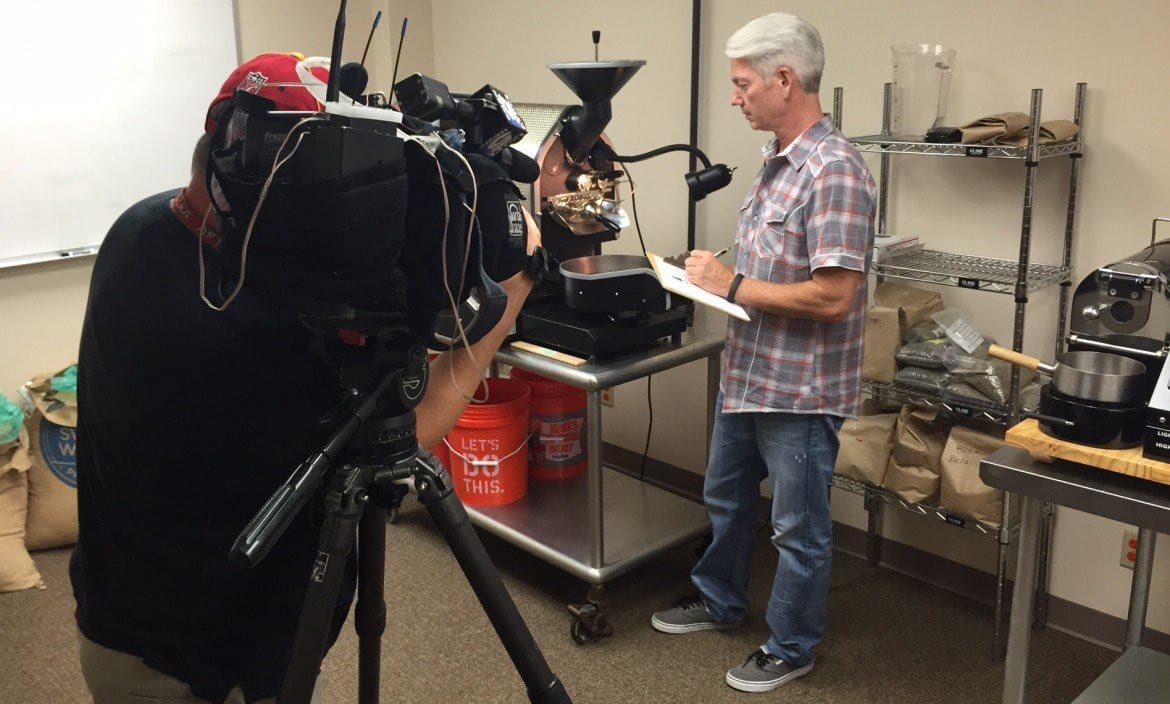 Supertaster Tracy Allen is filmed while he looks over the roasting of the papal coffee beans at Brewed Behaviors headquarters in Overland Park, KS. (Credit: Brewed Behaviors)
Share this story

We all know Pope Francis made his first visit to the U.S. this week, and his Congressional address has already been called everything from too progressive to not progressive enough. We’ll leave that for the pundits, but an equally fun fact is the pontiff’s java was created right here in the Kansas City area.

We caught up with Tracy Allen, CEO of Overland Park-based Brewed Behavior, to hear how the experience, which he called “humbling for a lifelong Catholic,” came about.

“I received a communication from his (the pope’s) handlers to design a sustainably sourced coffee to help commemorate the pope’s first U.S. visit,” he said

Allen, who has the super-special designation of being the only 3-time supertaster in the world for the Specialty Coffee Association of America, said he used what he knew about Pope Francis to create a coffee profile. It’s what Brewed Behaviors, which he founded, does for companies all the time.

Allen and his crew then sent samples to Italy, and the Vatican must have liked the profiling. Allen said the official order came in at around twice the original: He was asked to create 60 pounds of his coffee blend for the visit.

Here’s another really fun fact about Allen – besides, you know, being the guy who got to make the pope’s coffee blend – he was once an intern here at KCPT. A University of Missouri grad, Allen returned to school for his second degree a little more than a decade ago at UMKC. A class required an internship, and he ended up working behind the scenes at Kansas City Week in Review.

We’re glad he remembers his time in these halls fondly.

The entire brew-the-pope’s-coffee experience will also be fondly remembered by Allen, but he did say there was a downside. Since the story broke, people have been calling the Brewed Behavior office and asking for “the pope’s blend”.

Millennials got a lot of cultural love this week. The texted squeal level was at high during a surprise reunion between Kenan & Kel for a Good Burger sketch on “Jimmy Fallon’s The Tonight Show”. And then Nickelodeon announced a 90s-era block of programming returning to the air- and digital waves at The Splat. Of course, they hashtagged the lead up (#thesplatiscoming).

If most of these words don’t make any sense to you, allow me to paraphrase Olympia Dukakis’ Clairee Belcher in “Steel Magnolias”: Here, come sit by me. And whew, that should raise the average age by a decade or so.

We’re in a coffee mood, what with knowing Pope Francis has a coffee profile and all. And coffee means we’ll need something sweet on the side. Luckily, locally-owned Cupcake A La Mode has us covered on all fronts, from bean brews to Plaza Art Fair-themed cupcakes this weekend.