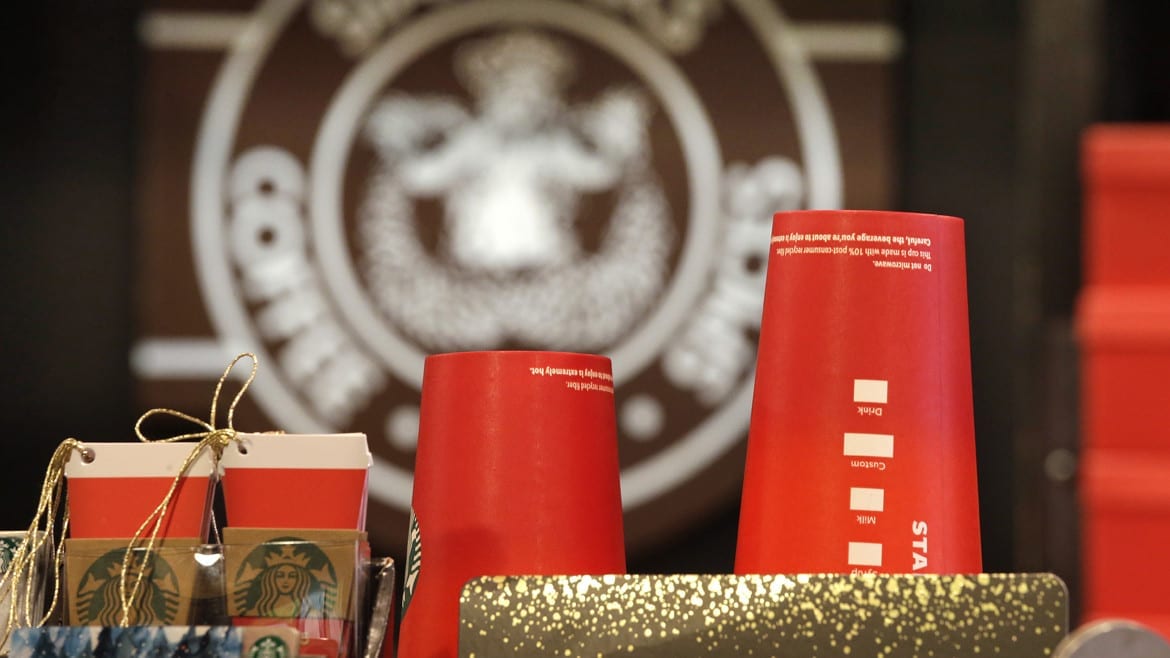 It's as red as Santa's suit, a poinsettia blossom or a loud Christmas sweater. Yet Starbucks' minimalist new holiday coffee cup has set off complaints that the chain is making war on Christmas. (Photo: Elaine Thompson | AP)
Share this story

The Pentagon is confident that “Jihadi John” a British member of the Islamic State militant group, has been killed today in an air-strike. If nothing else, the strike demonstrates that it’s always a bad idea to use a nickname that starts with “Jihadi.”

France’s RTL Radio reports that a formal dinner with French President Francois Hollande and Iranian counterpart Hassan Rouhani has been canceled. The Iranians insisted that the meal be halal, and so served without alcohol. France, being France, refused to host a dinner without wine.

Starbucks announced a new, minimalist holiday cup design. The announcement prompted approximately 100 people to object and 100 million people to self-righteously object to that objection. Also, Christians are being slaughtered across the Middle East. But, yeah, that whole no-snowflakes on a coffee cup thing is really bad.

Hillary Clinton claimed she tried to join the Marines. Donald Trump said that 11 million people could be deported “humanely.”  Bernie Sanders inspired a extraordinarily popular line of underwear. And some people still claim that the American political process lacks dignity.

A delegation from Scotland is lobbying Washington to end the U.S. ban on haggis. The Scottish national dish, made of sheep’s lung, heart and liver, and boiled in a sheep’s stomach, has been banned since 1971. According to the delegation “millions” of Americans would like to try the delicacy. Maybe. But don’t hold your breath waiting for McDonald’s to offer the McHaggis sandwich.

Scientists said that Stonehenge is beginning to reveal its secrets. Nigel Tufnel could not be reached for comment.

Jennifer Lawrence, a gorgeous, wealthy 25-year-old movie star, complained about her love life. “No one ever asks me out,” she told Vanity Fair. “I’m lonely every Saturday night.” The interview, surprisingly, was not accompanied by a performance on the World’s Smallest Violin.

According to a new study, people who have lots of sex make more money. The study found that people who have sex two or three times a week earn 4.5 percent higher wages than people who have sex less often. In other words, a healthy sex life can contribute to overall well-being, thus making you into a more productive employee. Either that, or having lots of money makes you sexy.

Kansas City’s streetcar got its first test on Friday. The vehicle was pulled along its tracks by a giant truck. Which makes you wonder if it wouldn’t be easier just to move people with a truck.