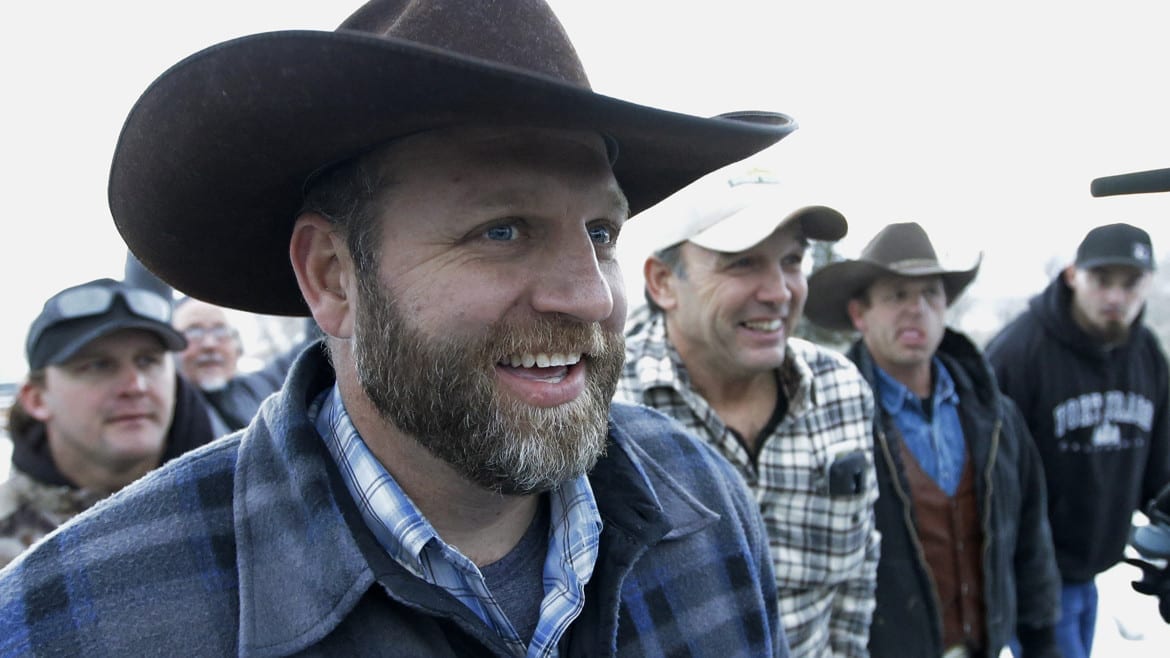 Ammon Bundy, one of the sons of Nevada rancher Cliven Bundy, arrives for a news conference at Malheur National Wildlife Refuge after meeting with Harney County Sheriff David Ward near Burns, Ore. Ward and two other Oregon sheriffs met Thursday with Bundy, the leader of an armed group occupying a federal wildlife refuge and asked them to leave, after residents made it clear they wanted them to go home. (Photo: Rick Bowmer | AP)
Share this story

North Korea claimed this week that it successfully exploded a hydrogen bomb, a test which came in the run-up to President Kim Jong Un’s 33rd birthday. It’s a story about nuclear weapons where the names “Fat Man” and “Little Boy” are actually referring to a head of state.

Jihadi Abu Rumaysah is suspected of being the masked Briton who appeared in a brutal new Islamic State video. The 32-year-old Brit is also reportedly a former inflatable bounce house salesman. Which proves that working with moms who throw birthday parties for their over-privileged kids is enough to make anyone crazy.

Donald Trump says that a federal court should determine if Ted Cruz, born in Calgary to an American mother, satisfies the “natural born” requirement to serve in the Oval Office. Trump claims that Cruz might not be qualified to serve as president. Which, you know, is kind of ironic.

The protesters occupying a building in Oregon have issued a call for snacks and warm clothing, proving themselves the least-prepared survivalists ever. The government’s response, meanwhile, is to wage boredom. Rather than firing off tear gas, kicking in doors, and storming the building, authorities are reportedly planning to cut the Bundy’s electricity and phone service, then shut off roads to the refuge.

On Wednesday, Ammon Bundy supposedly compared himself to civil rights icon Rosa Parks. The story spread like a wildfire on government-run land, reported by news outlets including Time, New York Daily News, Washington Post and most of the major TV news networks. Except the whole things was a hoax. The Twitter account reported as belonging to Bundy was revealed as a fake. Because journalism is dead, and why should anyone let facts get in the way of a good online burst of outrage?

Also on the subject of outrage, President Obama signed a series of new executive actions aimed at reducing gun violence. The measures won’t do very much to prevent gun violence, nor do much restrict gun rights. That didn’t stop people on all sides of the issue from reacting as though the Second Amendment was about to be repealed. Also, as usually happens when the president mentions gun control, sales of firearms went up in response to the speech. Maybe the president should call to restrict the sale of exercise equipment. Then people wouldn’t be so fat.

The California company behind Lumosity will have to pay a $2 million fine for claiming the brain game can improve your memory. There’s more to the story, but I can’t remember any of it.

Mexican President Peña Nieto says police have recaptured alleged drug lord El Chapo. The world’s most wanted drug kingpin fled a Mexican prison last year, escaping through a tunnel that took a year to dig. The arrest comes just as a movie about El Chapo, “The Escape of the Century” is set to hit theaters in Mexico. With this arrest, “Escape of the Century II” is surely in the works.

Alex Gordon signed a four-year $72 million contract with the Kansas City Royals. Immediately afterward, Gov. Sam Brownback’s office took to Twitter to tout the tax savings Gordon will enjoy: “Congrats, Alex Gordon! With your new contract, you’ll save about $1.8M/year in taxes just by living in KS instead of CA,” said the Tweet.

However, according to a spokesman for the Royals, Gordon claims residency in Nebraska. Also, the Royals play in Missouri. Plus Major Leaguers have to pay taxes in every state where they play during the season, meaning that Gordon will, in fact, pay California income tax when the team plays road games in Anaheim. Other that that, though, the Tweet was right on the money.