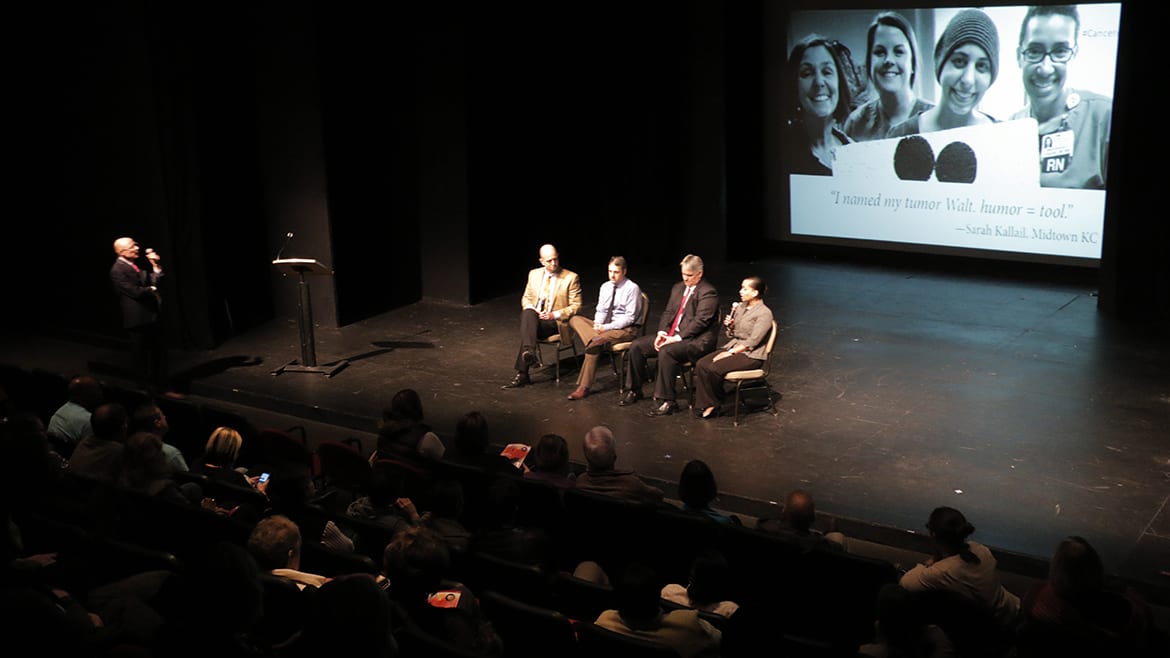 Cancer survivors, caregivers, advocates and community members gathered at Union Station for KCPT’s sneak preview of and discussion about “Cancer: The Emperor of All Maladies” on Tuesday evening.

The preview included several clips from the expansive six hour series, which will air on KCPT over three consecutive nights beginning Monday, March 30 at 8 p.m.

From early descriptions of cancer that Egyptians recorded 4,000 years ago on papyrus to how families today struggle with the enormous cost of treatment, the clips covered a wide range of topics. A panel of local experts then related to cancer’s impact in our metro.

University of Kansas Cancer Center Director Dr. Roy Jensen was one of four panelists that helped contextualize issues presented in the film in terms of what we see in Kansas and Missouri.

Jensen emphasized the importance of cancer prevention and early detection. He said that both states have done a poor job of investing in public health and that too much of burden falls on patients and their families.

Panelist Consuelo Ross, who is a breast cancer survivor and has devoted her career to helping underserved population navigate the health system, echoed Jensen’s statements and said that her cancer journey was a financial struggle.

People who are uninsured or poor have a 10 to 15 percent lower survival rate five years from their diagnosis, according to sources in the film.

Beyond the economic impact of cancer, the discussion also centered on advances in treatment.

The final clip from the documentary featured the story of Emily Whitehead, a young girl with acute lymphoblastic leukemia. Emily was the first child to ever take part in a radical treatment known as T-cell therapy, which uses genetically programmed cells from the patient’s own immune system to attack cancer cells, and it has had promising results.

T-cell therapy is only offered at seven hospitals in the country, including Children’s Mercy in Kansas City.

At Children’s Mercy Hospital, Doug Myers and Keith August research new cellular therapies. As part of the panel, they shared how experimental treatments make a difference for their patients as well as the unique challenges presented by pediatric oncology.

As part of a local reporting project around the upcoming Ken Burns documentary series, Cancer: The Emperor of All Maladies, KCPT presents Cancer in KC. We want to learn more about how cancer affects our community. How has cancer impacted your life? Share your story.