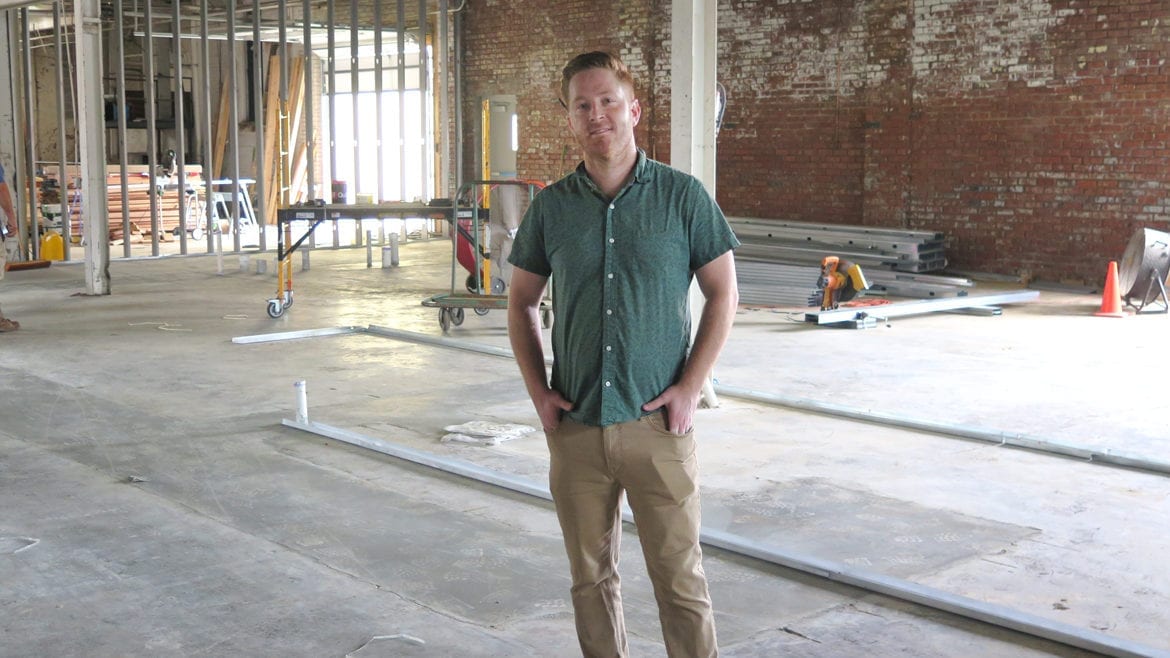 Strange Days Brewing Company hosts a preview party tonight from 4 to 11 p.m., at Bier Station (120 E. Gregory Blvd.) to share information about its forthcoming brewery in the River Market.

Co-owners Nathan Howard, Chris Beier, and Alec Vemmer anticipate an official opening by early winter. They shared some details this month about their building (316 Oak St.), construction and brewing philosophy.

“We’ve made a lot of progress in the past few weeks after a few surprises at the beginning of construction,” Howard said. “We are learning about the charms of renovating an old building.”

Plumbing should be mostly finished by the end of last week. The team has started on electrical work. Walls should be framed out in the next two weeks, giving shape to the interior space.

“We’ve also been removing years and years of dust, dirt, and old paint from the building, which has been a dirty, but fun process,” Howard said. “We’re aiming for construction to be complete by late September to early October.”

The combined 2,500 square-foot taproom and outdoor seating space equates to about 180-person capacity.

As the trio work toward building the brewery and launching, Howard acknowledged the supportive local craft brewing community.

“The craft beer industry is insanely nice and welcoming. I doubt we could have done this without the help of other breweries: Big Rip, Stockyards, Red Crow, Crane, Martin City, Double Shift, Torn Label and so many more,” Howard said. “We still have tons to learn, and it’s great to know we have a community to lean on.”

Fossil Cove is Coming to Missouri For The Weekend 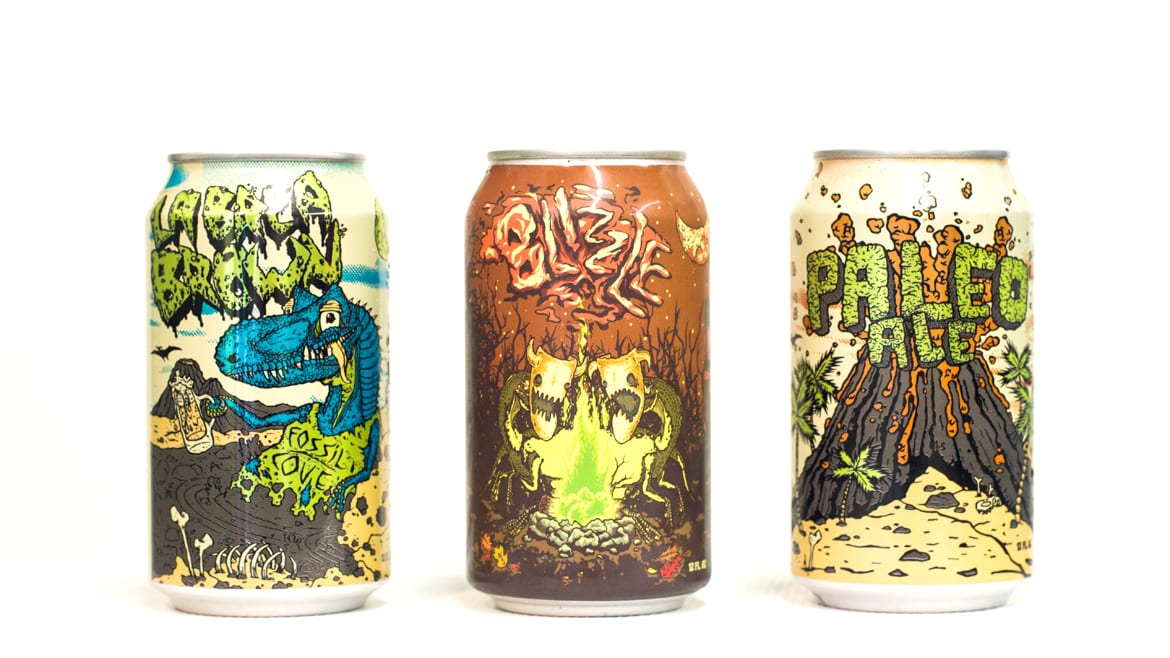 Fossil Cove Brewing Company, based in Fayetteville, Arkansas, is one of dozens of breweries, distilleries, cideries, meaderies, and wineries that will pour samples at the third annual invitational Festival of the Lost Township on Saturday, Sept. 16. in Raytown (62nd Street and Raytown Road). The brewery only distributes in the northwest Arkansas area. The festival appearance is a prime opportunity to explore their beer. They’ll have a trio of brews available.

Paleo Ale is an American Pale Ale, “with a balanced citrus, white grape [flavor] and slight caramel and toasty notes,” according to Andrew Blann, who manages the marketing and tap room at Fossil Cove.

Fossil Coves tasting room has a large selection of exclusive beers that have developed a steady following. Some notable Tasting Room favorites are the Belgian-style T-Rex Tripel, juicy Session IPA #5, T-Rex Tripel on Peaches, which is aged in wine and bourbon barrels with 70 pounds of fresh Ozark peaches added per barrel, and IPA #3, a year-round IPA.

Local breweries have begun to produce Oktoberfest and fall seasonal beers for taprooms and distribution.

Double Shift Brewing Company (412 E. 18th St.) has one such style targeted for mid-September release. “Like our Autumn lager last year, this one will be a touch more malt-forward than style dictates, but at its core very traditional,” head brewer Bryan Stewart said. “It is brewed with floor-malted base malts with a bit of CaraHell and Melanoidin for malt complexity. Hop additions are relatively traditional with Perle and Mandarina Bavaria.”

Boulevard Brewing’s perennial release of Bob’s 47 is a tribute to former George Muehlebach Brewing Company master brewer Bob Werkowitch. He was also an early mentor to John McDonald, founder of Boulevard. This version of a traditional German-style Marzen/Oktoberfest has a toasty malt and crisp hop aroma, caramel-toffee malt notes, and herbal, woody hops flavor. They available in six-pack bottles and on tap throughout Kansas City.

Calibration Brewing’s (119 Armour Road, North Kansas City, Missouri) Oktoberfest, due out by the second week of September, is an autumn-inspired dark amber ale. Also coming on the fall menu, the pretzel-crusted pork loin with butternut squash puree and Oktoberfest beer mustard — a natural pairing with the Oktoberfest. 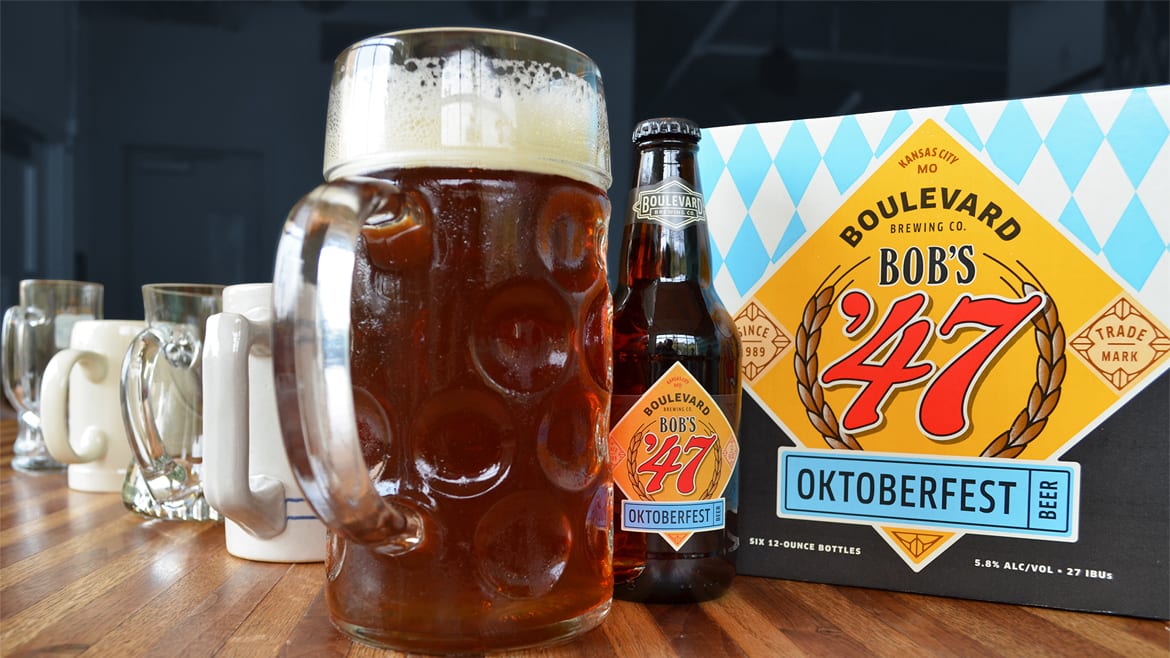 Boulevard’s Bob’s 47 is back. (Courtesy of Boulevard Brewing Co.)

Strange Days Brewing hosts a pre-launch party at Bier Station (120 E. Gregory Blvd.) to introduce beer lovers to its forthcoming brewery in the City Market. Strange Days’ founders will hand pick beers to tap from breweries that have inspired them or helped them prior to opening this winter. The founders will discuss the brewery and beer philosophy.

Grain to Glass (1611 Swift St., North Kansas City, Missouri) continues its Thursday Tastings series ($15 per person) with a focus on peach brews, apricot-flavored beers, and mead from  5 to 7 p.m.

Cinder Block Brewery’s beer will be a $4 special for Beer Bingo at Tapcade (1701 McGee St.) from 6 to 8 pm. Prizes offered with each bingo round.

Arts and Crafts Beer and Film Festival returns for its fifth year from Aug. 25-27. Held at Screenland Armour (408 Armour Road, North Kansas City, Missouri), the festival will have more than 75 beers from several dozen breweries, film screenings, live music, and raffle prizes for vintage bottles of 2012 Abraxas, 2015 Avery Fortuna and other beers.

Bier Station (120 E. Gregory Blvd.) is rustling up a bike rodeo from 11 a.m. to 1 p.m. for kids, plus rare taps and beer floats for adults. The rodeo is presented by Family Bicycles in the parking lot of Townsend Communications next to Bier Station. New Belgium Brewing has Le Terroir, La Folie, Clutch, and more on tap. Foo’s Fabulous Frozen Custard and New Belgium will create creamy, dreamy beer floats.

The inaugural Hip Hops Hooray Beer Fest kicks off at The DeLeon Event Space and Chapel (3235 Gillham Plaza) from 2 to 6 p.m. Boogie on down to hip hop and sip on some hoppy beers.