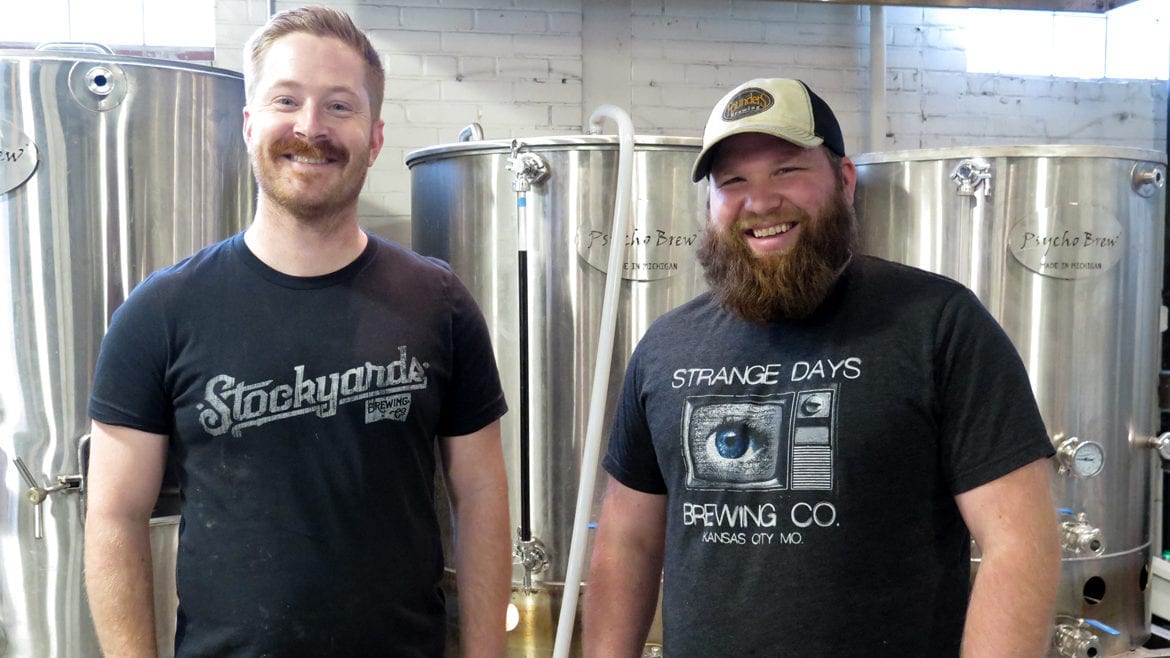 Tap List | Strange Days Brewing is Ready to BrewStrange Days Brewing Company (316 Oak St.) continues on pace to open by the end of 2017 in the River Market. The brewery, housed in a 4,500-square-foot building that was once part of Muehlebach Brewery, recently passed its health inspection.…

The forthcoming debut of Strange Days heralds the latest revival of brewing in the River Market. Immigrant Peter Schwitzgebel opened Kansas City’s first recorded brewery in the late 1850s near Third and Oak Streets, only a stone’s throw away from Strange Days. Beginning in 1938, post-Prohibition, Muehlebach Brewing constructed and operated several buildings that gradually encompassed the city block at Fourth and Oak Streets until the brewery ceased operations (under Schlitz Brewing Company ownership) in 1973. Two decades later, River Market Brewing Company (500 Walnut St.) operated in its namesake neighborhood from 1994 to 2009, during the city’s first modern wave of microbrewing. Strange Days is now housed in a former Muehlebach building, one of the few left standing.

Since the end of December, Howard and Vemmer have logged nearly a dozen batches on their Psycho Brewing system. The energy-efficient system, built in Michigan from U.S. stainless steel, uses natural gas and a tankless water heater.

On a recent visit, Howard poured a few samples of beers that will be available at the opening. Australian Sparkling Ale, made with three malts and a bittering hop, is an easy-drinking session sipper with a soft mouthfeel and light gold color. Day Dream Saison was brewed with orange peel, honey and peppercorn. Dry-hopped with German Mandarina Bavaria hops, the saison evokes more tropical fruit character than the traditional floral spice profile of a Belgian saison. Japanese Black IPA uses Sorachi Ace hops, originally developed in Japan in 1984 for Sapporo Breweries, as well as ginger and Szechuan peppercorn.

Black & Wit Witbier swaggers with the dark color and roasted malt heft of a stout, but saunters with the light mouthfeel of an effervescent ale. The low-alcohol witbier is brewed with midnight wheat for color, plus coriander and orange peel to balance the flavor.

With a new year underway, the River Market will once again be awash in locally-brewed beer made near the city’s birthplace along the banks of the Missouri River. 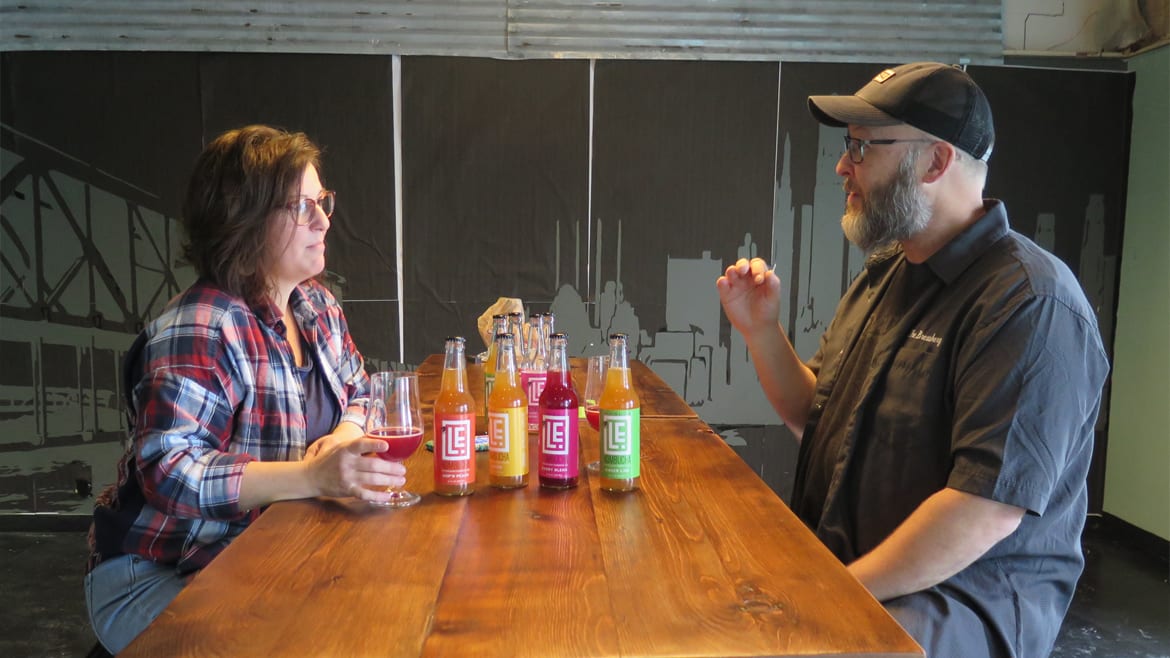 The Brewkery Plans to Open Kombucha Taproom in January

Goldman and Galloway initially developed a plan to open The Brewkery as a brewery and bakery, but later switched gears to focus on kombucha. Founded in early 2015, The Brewkery makes its kombucha from a base of black tea sourced from Hugo Tea Company (1007 Swift Ave., North Kansas City). Goldman and Galloway sweeten, ferment and carbonate the tea to produce kombucha. 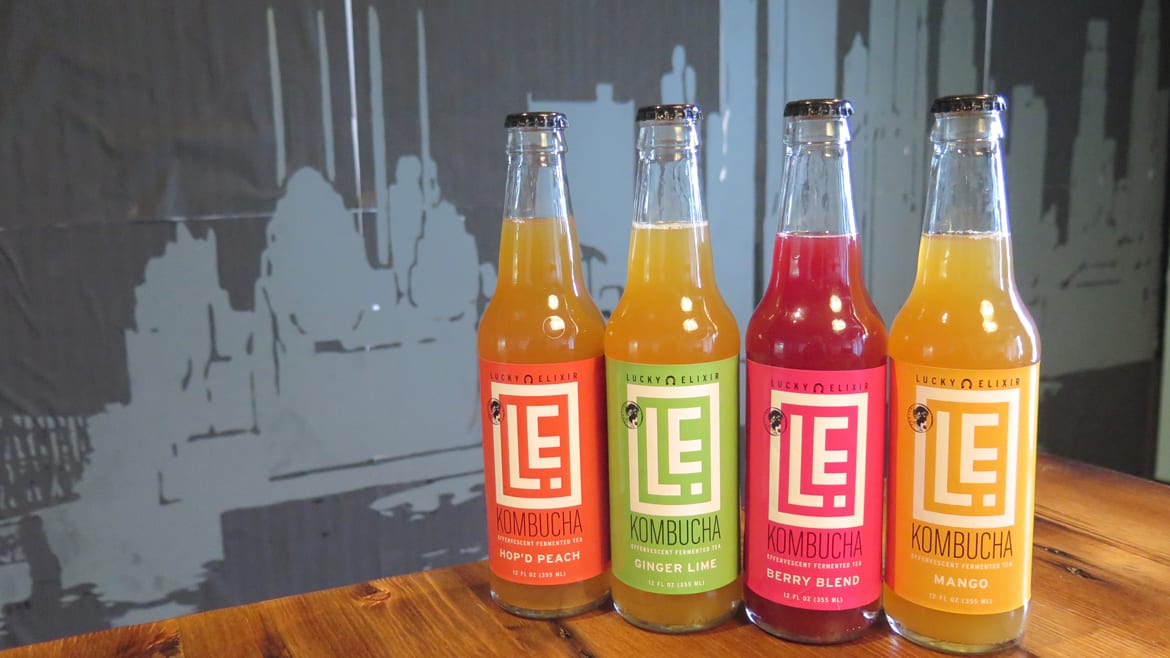 The Brewkery recently updated the look of its branding and labels that will debut in stores in February. Bottles now sport labels with vivid  colors, a maze-inspired logo and the image of Fortuna, the goddess of luck and fortune. (Pete Dulin | Flatland)

Formerly, The Brewkery leased space out of a Midtown food manufacturing kitchen to produce its startup beverage line. In addition to the taproom, their new 3,400 square-foot Northtown space includes a production facility for brewing, a fermentation room, cold storage room, office and retail lounge. The expanded operation enables them to not only sell kombucha direct to the public, but also brew and bottle kombucha under the same roof. They’ve been brewing in this location since June.

“We currently have the capacity to produce 34 barrels of kombucha a month, but can scale a lot in this space,” Galloway said.

The taproom features a robin egg blue and warm gray color palette. Local graffiti artist Brew Lamb stenciled a mural of a bridge that spans the Missouri River on one wall of the taproom. The front of the bar is covered in walnut boards recovered from an old barn. Tyler Kingston, an industrial modern furniture maker and home retail shop (422 Armour Road, North Kansas City, Missouri) built much of the rugged furniture out of reclaimed wood.

At the taproom, The Brewkery’s core four flavors and limited-edition, seasonal and experimental flavors of kombucha will be served from 12 taps. Kombucha will also be available in flights, growler fills and four-pack bottles to go. 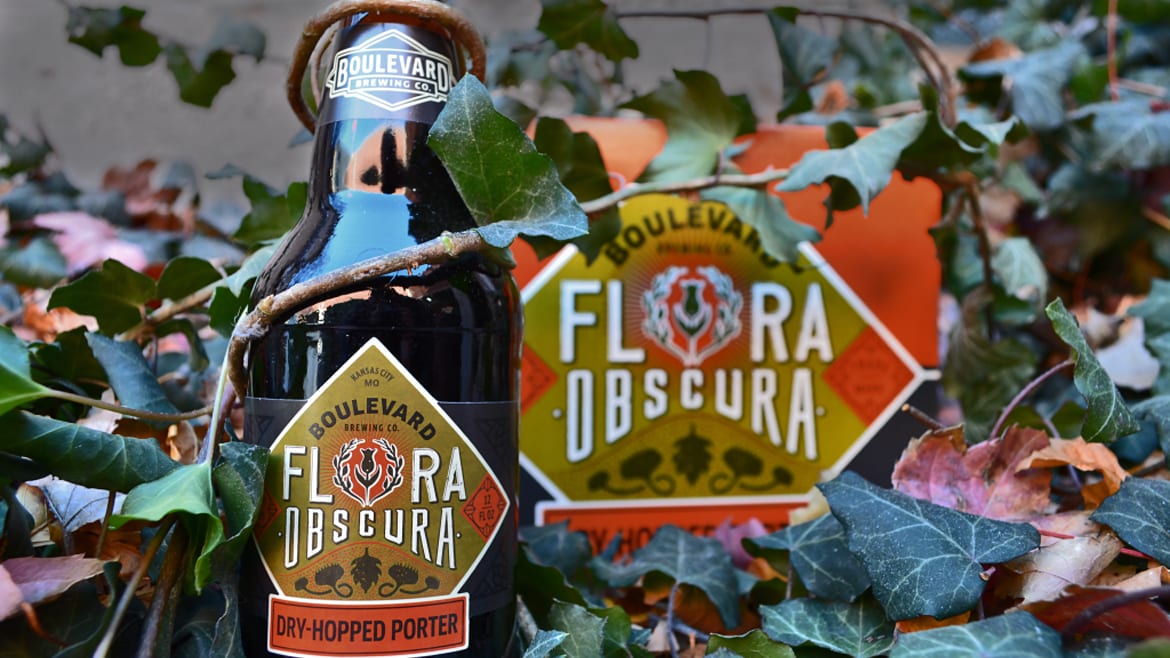 Miami Creek Brewing Company (14226 NW County Road 14001, Drexel, Missouri) has acquired its winery permit, enabling owner-brewer Will Reece to begin producing cider, fruit wines and mead this year. He plans to test batches of dry cider and a light mead this spring. Meanwhile, Miami Creek releases its 2018 version of Hot Pepper Ale and Farmhouse Wheat Ale in January, once a tap frees up in the taproom.

Boulevard Brewing kicks off 2018 with a new beer and the return of a popular barrel-aged beer. Rye on Rye (12-percent ABV) is back and now available in four-packs of 12-ounce bottles along with 750-milliliter bottles and on draft. The rye beer, aged in Templeton Rye barrels, was most recently released in 2015. This year’s version carries aromas of spicy, fruity rye malt, rye whiskey, vanilla, toffee and charred oak. The beer’s medium body presents caramel/toffee malt flavor balanced by earthy, herbal and citrusy hop notes. 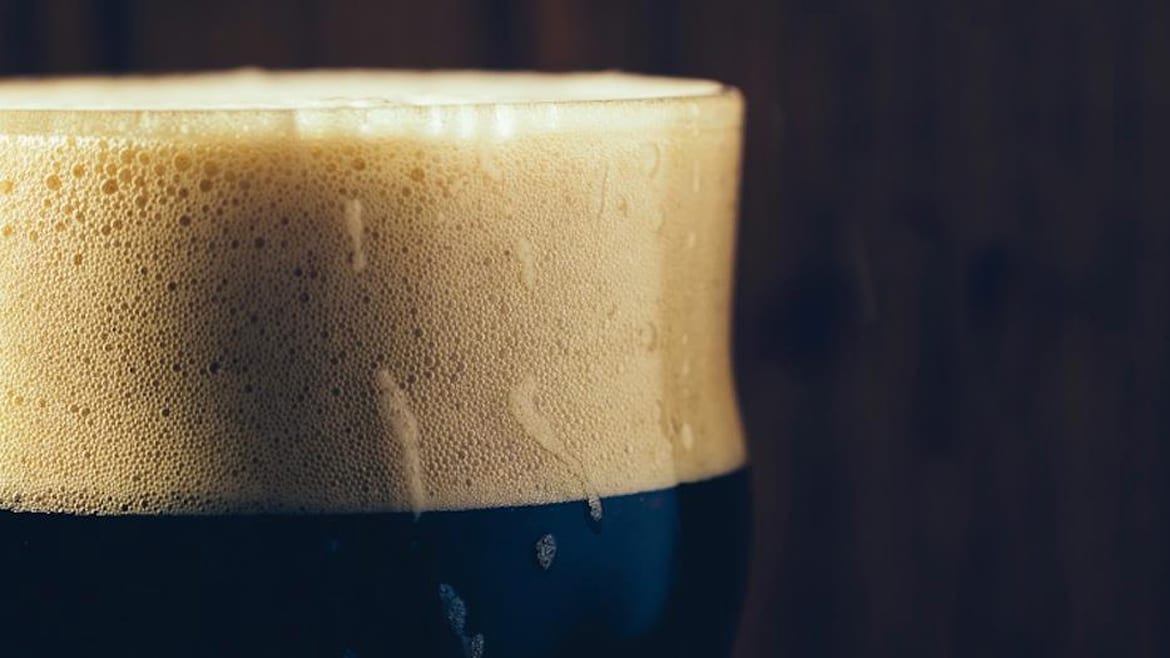 Stouts are the focus for The Foundry at McCoy’s this month. (Courtesy of The Foundry)

Get your spirits up at the Winterstorm competition, a Scottish piping and drumming event that runs Jan. 11 to 14 in Kansas City. Raise a toast to competitors with a beer from Kansas City Bier Company, the event’s beer sponsor, as Scottish, Irish, German and other international bagpipers and drummers compete.

The Taproom at Crane Brewing (6515 Railroad St., Raytown, Missouri) taps Ray, a Raytown Common, that is crisp, clean and refreshing. According to the brewery, this second batch used less malt and resulted in a lighter color.

Get a head start on your year-round do-gooding at Bier Station (120 E. Gregory Blvd.), and raise money for HappyBottoms’ baby diaper assistance program. Proceeds from sales of Stockyards Brewing beer go toward HappyBottoms which helps those in need to gain access to diapers.

Double Shift Brewing (412 E. 18th St.) taps its collaboration with Messenger Coffee, an Imperial Milk Stout with ristretto (a short shot of espresso with half the water), and vanilla.

Lend a helping hand after lunch and a beer at McCoy’s Public House (4057 Pennsylvania Ave.) from noon to 3 p.m., where the Kansas City Atheist Coalition (KCAC) will eat lunch, socialize and then assemble Winter Care Kits to help homeless people during the cold months. Kits include socks, hand warmers, bottled water and a snack.

Take the “Know Your Boulevard” beer challenge from 6 to 8 p.m. at Chicken N Pickle (1761 Burlington Ave., North Kansas City, Missouri). Sample six mystery Boulevard beers. Identify all six and receive a $25 gift certificate. Must be 21 years-old or older to participate.