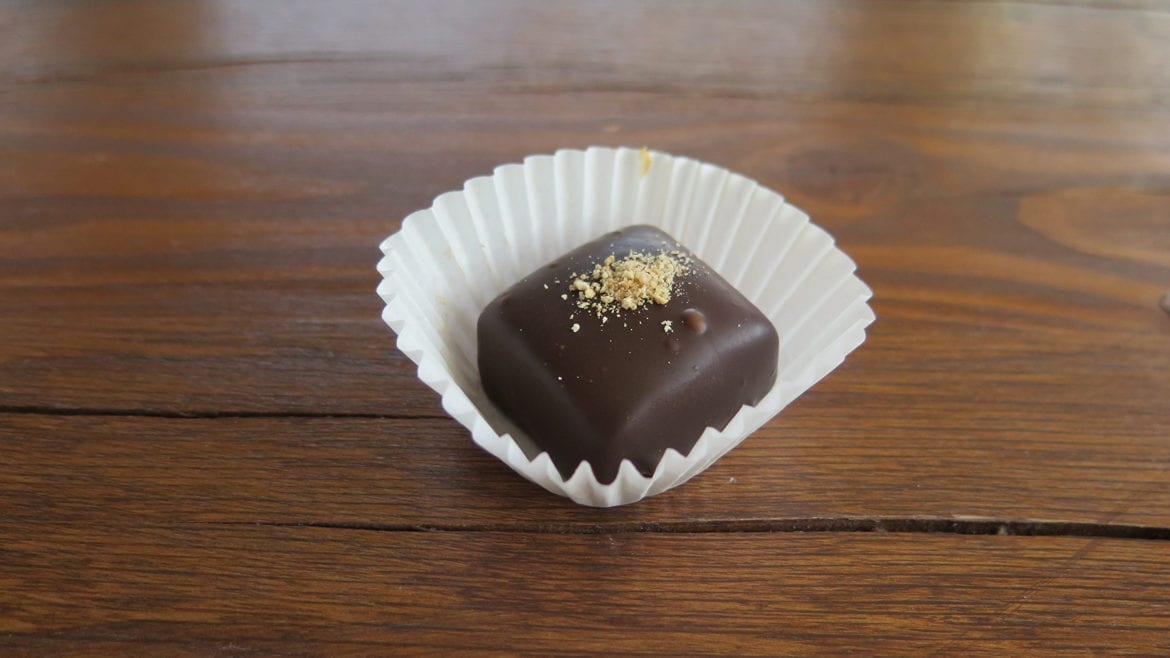 Bizz and Weezy and Double Shift Brewing Co. have collaborated on a new caramel. (Courtesy of Bizz & Weezy)
Share this story

“Double Shift doesn’t have the same beers [on tap] all the time,” Pitcher said of his Crossroads neighbor. “I can rotate flavors and still have something local.”

“To get the flavor right, you have to add the beer at the right time,” Pitcher said. “I get the beer before it is carbonated and the flavor is in concentrated form.”

Un-carbonated beer also saves time when reducing liquid in the cooking process to produce caramel. The production process for one tray (yielding 140 pieces) requires two hours of cooking time, 24 hours to cool, and another hour-and-a-half to cut and dip pieces in dark chocolate.

Beer caramel and up to 30 other flavors are available in the shop and online. Bizz & Weezy plans to introduce a line of drinking chocolate and drinking caramel, including a beer-flavored version, in November. 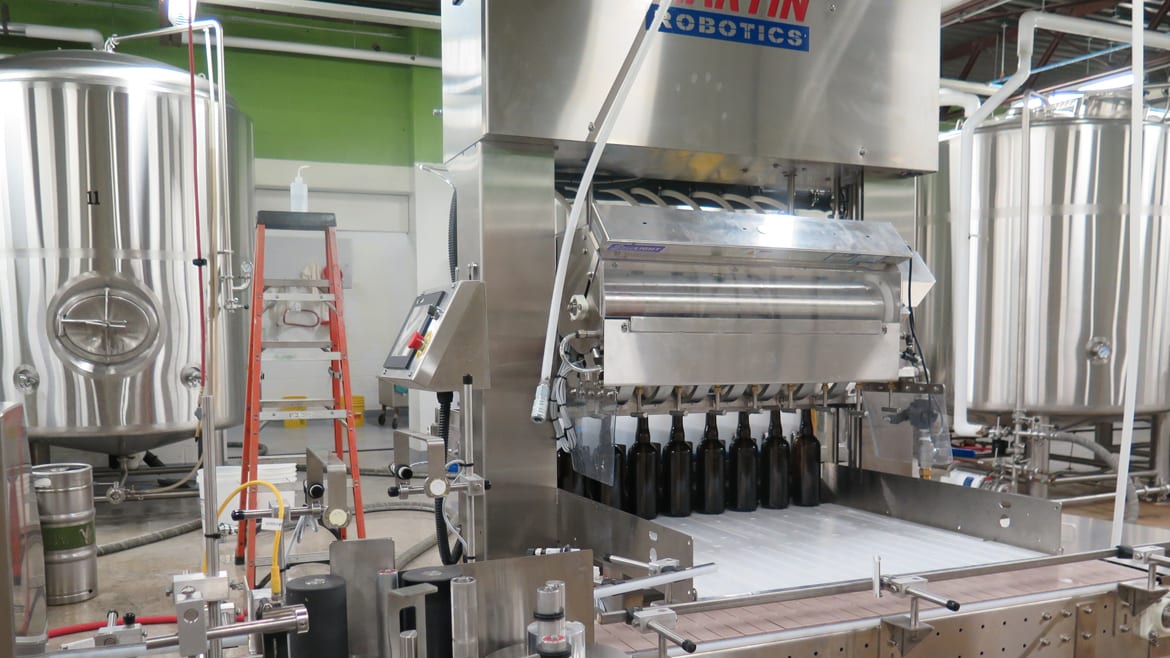 Crane Brewing (6515 Railroad St., Raytown, Missouri) has acquired and installed a packaging line in its production brewery that expands its bottling capabilities. Built by Martin Robotics in Lincoln, Nebraska, the 8 Shooter is an eight-head beer-filling machine that handles 12-ounce and 375-milliliter Belgian-style bottles, as well as other sizes.

“We’re able to go to smaller format packaging,” brewery co-founder Chris Meyers said. “We can also do cans in the future.”

Meyers estimates that Crane will be able to package 1,500 bottles per hour. Previously, Crane’s team filled, crowned and labeled their original 750-milliliter bottles by hand, taking most of a day to complete a packaging run.

Crane Brewing is still deciding which current and future beers will be distributed in six-packs. They’re in the process of developing labels and packaging to fit the alternate format. Look for some sours and Brettanomyces-based beers in 375-milliliter bottles.

“We will release 375-milliliter bottles in the next few months,” Meyers said. “Six-packs will come out after the first of the year. We need to package enough first to get ahead of the market.” 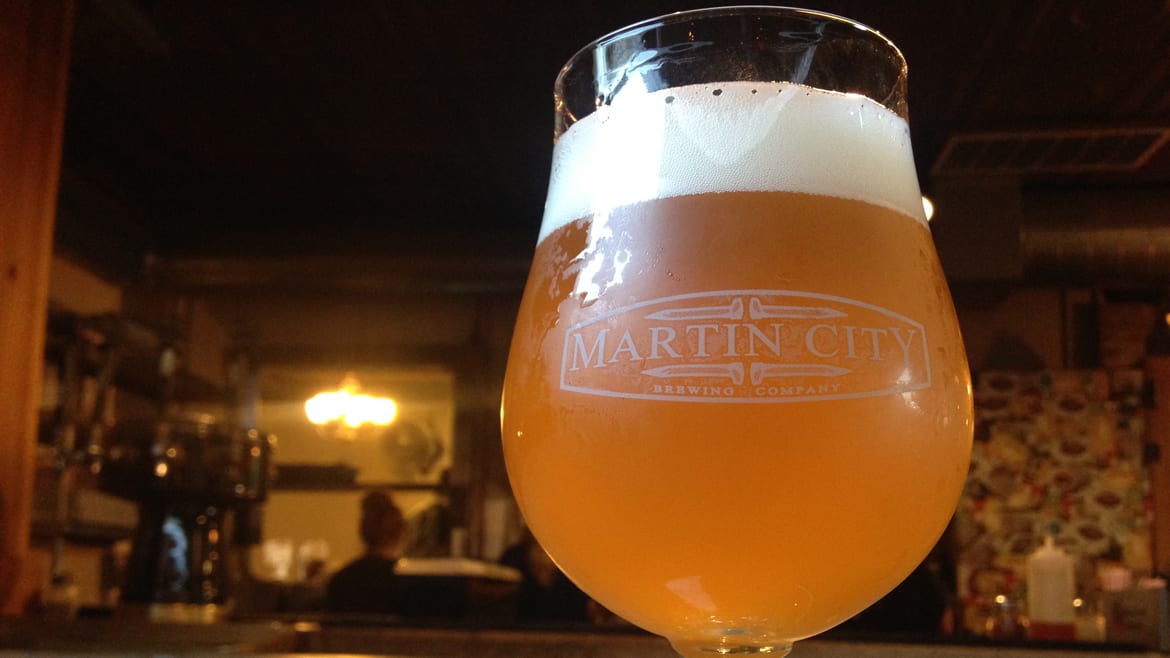 Despite the name, take your time with Martin City Brewing’s (500 E. 135th St.) 5 Second Rule available at the taproom. The beer originated as a “fun way to see what kind of unique flavor Kansas City microbes can give to a beer,” head brewer Nick Vaughn said.

“We took the lids off, put some nylon screens on top just in case, and left them there for two days,” Vaughn said. “When they came back, a quick look under the microscope revealed a lot of microbes in the wort. Within a week, we had a great fermentation going.”

The brewery blended beer from the totes and aged it in barrels for two years. The result is a subtly complex beer with a layer of sourness beneath semi-sweetness at the front.

“5 Second Rule is a play on the old adage of you have five seconds to pick food up off a dirty surface before it’s ‘infected’ and unfit for eating,” Vaughn said. “We left the wort outside on a farm for 172,800 seconds, and while it was infected, it turned out pretty amazing. Maybe that gummy bear you drop on the ground could contain the next great consortium of yeast and bacteria to grace wort, and we’ve been taught to throw it away.”

Last week Boulevard Brewing released Bundle Up, its first barleywine-style strong ale. Bundle Up (10.5-percent ABV, 59 IBUs) is a full-bodied beer with a prominent base from a five malt grain bill. Sticky caramel and toffee flavors emerge with a touch of piney resin and spice notes from hops. Suitable for the cold, blustery winter season, this warming barleywine finishes with hints of rum and raisin.

“The collaboration was a meeting of the minds to play off of their name with an appropriate style and idea,” head brewer Rodney Beagle said. ”The color is that of changing leaves with a sweet, biscuity aroma. The flavor hints of caramel, bread, and malty sweetness. Phantom Power is the amps required to power a microphone.”

Jack’s Jubilee is a collaboration between Martin City Brewing Company and Fiorella’s Jack Stack Barbecue. The American Pale Ale was brewed to celebrate Jack Stack’s 60th anniversary this month and will be on tap at all five Jack Stack locations starting Oct. 1.

Double Shift Brewing’s (412 E. 18th St.) Literally Can’t Even Belgian Strong Ale will return in the second week of October. Also in October, look for the bottle release of Barrel-Aged Sister Abby and Bring Out Your Dead Blonde Coffee Stout.

In a Great American Beer Festival update from last week’s Tap List, Stockyards Brewing sent the following four beers to the national competition: Stocktoberfest in the Vienna-Style Lager category, Saison in the Classic Saison category, West Hef Hefeweizen in the South German-Style Hefeweizen category, and Anniversary Ale in the Belgian-Style Strong Specialty Ale category. Stockyards will also attend the fest and pour samples of these beers.

Boulevard’s Bundle Up is a new barleywine from the Kansas City brewery. (Courtesy of Boulevard)

Lone Elm Tap Room (14615 W. 119th St., Olathe, Kansas) will have four beers each on tap from the Free State Brewing Company and Torn Label Brewing Company, including harvest ales that use hops from Kansas Hop Company. A percentage of the proceeds will be donated to The Family Conservancy.

Martin City Brewing will be pour samples of its beers at the Renaissance Festival on Oct. 7 and 8 from noon to 4 p.m. each day.