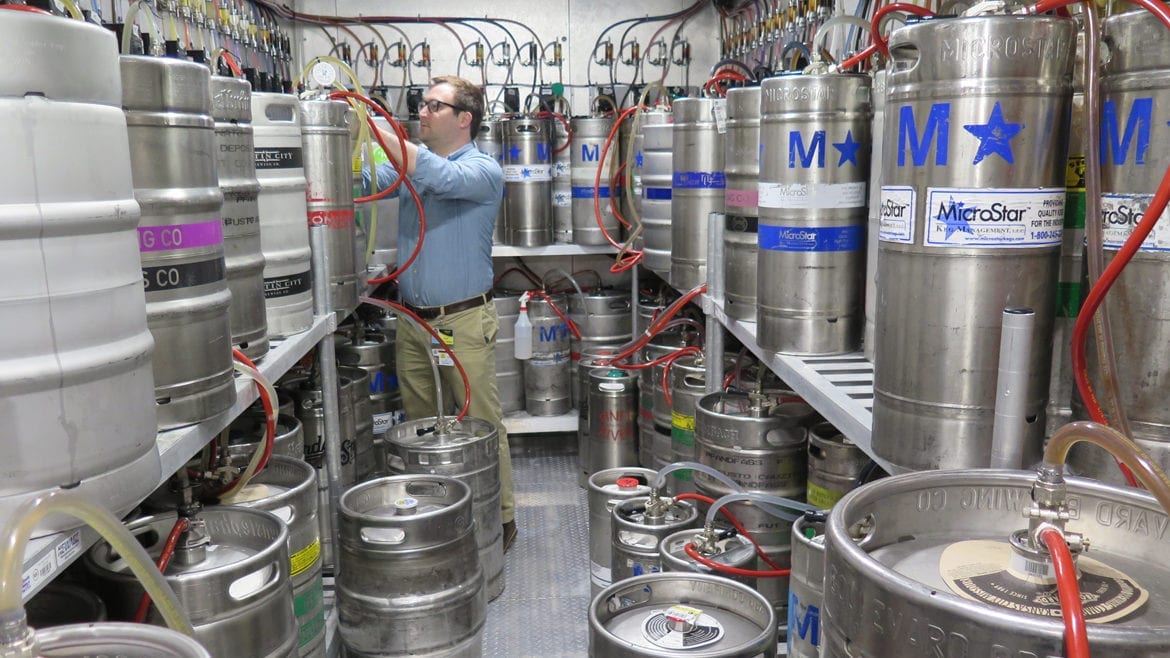 99 Hops House General Manager Eric Flanagan tends to a keg in the cold room behind the bar. (Pete Dulin I Flatland)
Share this story

Argosy Casino Hotel & Spa (777 Argosy Casino Parkway) is betting on the house brew. 99 Hops House, the craft beer bar tucked inside the casino, is set to release 99 Hops Red Ale, a new collaborative brew with the Cinder Block Brewery, this Thursday. The collaboration beer will be exclusive to 99 Hops House, which has 28 beers available on its self-service beer tap wall (part of 90 total taps) and a curated collection of bottles and cans from local and regional breweries.

Self-service taps are relatively new in Kansas City. Along with 99 Hops House, Ruins Pub has a self-service tap wall, as will the forthcoming iTap and Mission Taco in the Crossroads. To use the self-service tap wall, guests receive a plastic card similar to a credit card. The card is used to digitally ‘order’ a desired beer and quantity, which the guest gets to pour. A screen displays the cost of the transaction, which is tallied on the card.

Manager and certified cicerone Eric Flanagan, formerly with Bridger’s Bottle Shop and Westport Ale House in Westport, leads the taproom’s beer program. His bartenders and servers are cicerones (the beer equivalent of sommeliers) or studying to attain certification.

“The staff receives ongoing education,” said Flanagan. “They are trained to discern what beer a customer likes and guide them. Talking about beer starts a conversation and builds rapport.”

Flanagan organized the beer menu to be useful for craft beer newcomers and brewery-savvy drinkers.

“The beer menu is broken into categories,” said Flanagan. For instance, “Pils, Blonde, Light, Wheat” is a grouping of light, lower-alcohol beers. “Many of our regulars are casino customers that drink beers around four to six percent alcohol by volume.”

For tap hunters, 99 Hops also has barrel-aged Imperial Stouts, Belgian Quads, and other beers not widely available. Case in point: Madrugada Obscura Dark Dawn from Jolly Pumpkin Artisan Ales and Phantasmagoria Imperial IPA from Prairie Artisan Ales were on tap at one point.

The current beer list is updated instantly via the app Untappd and displayed on the taproom’s website and social media. Through Untappd, drinkers may check into the 99 Hops House location, log their latest craft beer find, and note comments and ratings. The taproom’s food menu is “beer-friendly pub fare,” with deviled eggs, poutine, BBQ pork nachos, Thai chicken flatbread, fish and chips, and burgers among the options.

Flanagan has talked with local brewers about collaborations and craft beer-related events at 99 Hops House. Check the events calendar below for details on its collaboration with Cinder Block Brewery: 99 Hops Red Ale, part of the North of the River series.

Noble Prize Imperial Pilsner, a new addition to the Boulevard lineup, is a dry, crisp classic Pils with aromas of “bready, honey-like malt sweetness with subtle floral and black pepper notes,” and spicy herbal hop flavor. Noble Prize will be available year-round in four-packs of 12 ounce bottles as part of Boulevard’s Smokestack Series. 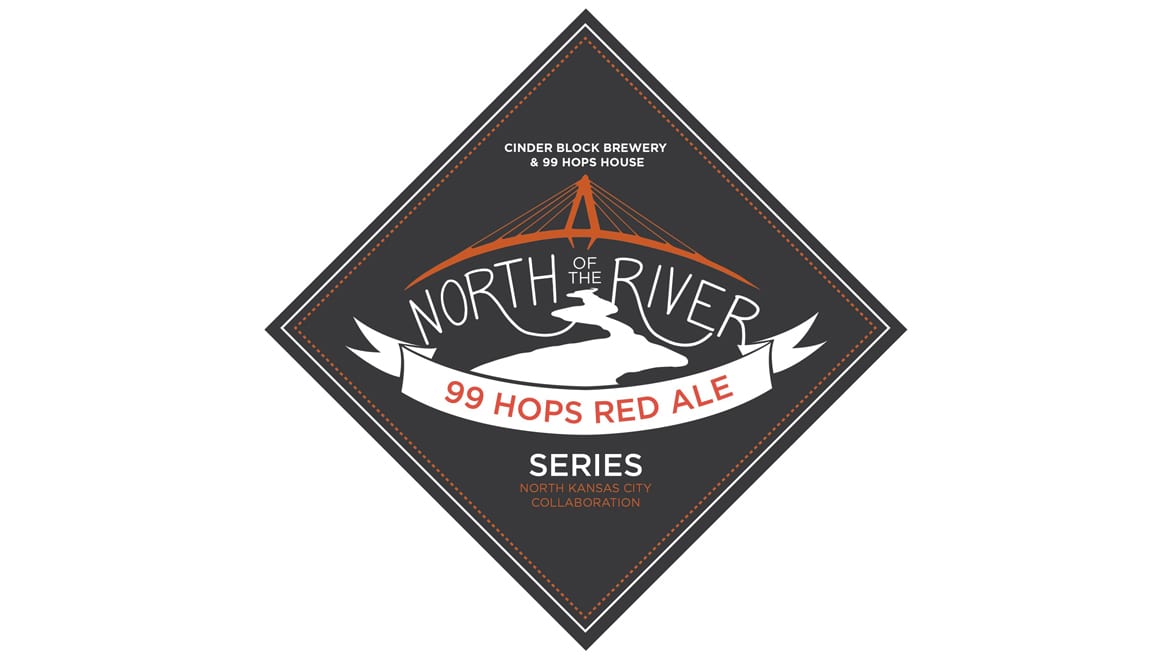 North of the River is the new collaboration between 99 Hops House & Cinder Block Brewery.

99 Hops House hosts a launch party for Cinder Block Brewery’s North of the River 99 Hops Red Ale, a limited-edition beer created by the brewery exclusive to the taproom. Starting at 6 p.m., this Irish Red-style beer will be on tap along with several other Cinder Block beers. Irish musician Eddie Delahunt will perform from 7 to 9 p.m.

Get a personalized Guinness glass at Grinders High Noon (206 Choctaw Street, Leavenworth). Engrave your own glass. Free while supplies last.

After a brief hiatus, The Belfry (1532 Grand Boulevard) celebrates its grand re-opening. Pop in and raise a glass.

Get your Irish on with green beer and shenanigans. Celebrate St. Paddy’s Day with Kegs and Eggs at Hamburger Mary’s (3700 Broadway Road, Suite 110), located directly on the St. Patrick’s Day parade route. Green beer, coffee, and $10.95 breakfast can anchor your appetite for Irish-inspired antics.

Grain to Glass (1611 Swift Avenue, North Kansas City) hosts a Homebrewing for Beginners class ($50) from 4 to 7 p.m. Learn the critical part of boiling, adding hops, chilling, sanitizing, and pitching yeast. Also learn how to bottle a 5-gallon batch of beer with details on sanitizing bottles, crimping crowns, and bottle conditioning. Each participant takes home beers for bottle conditioning at home.