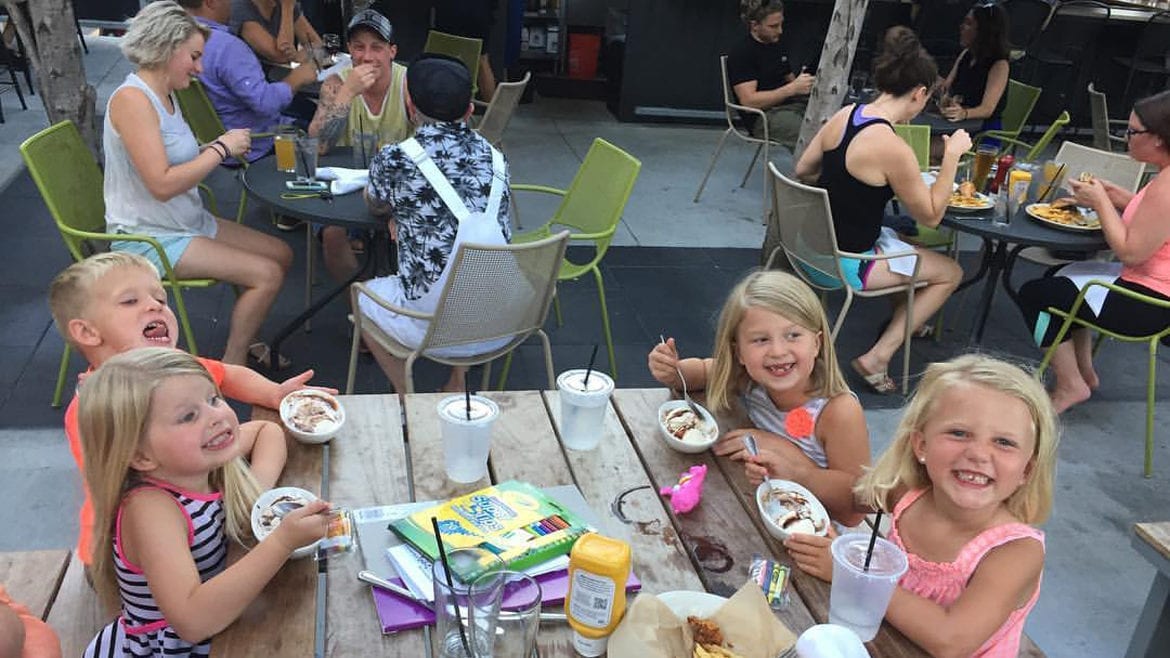 The children of Martin City Brewing co-owner Matthew and Kara Moore and craft beer fans Matt and Katie Murdick spend time with their family on the patio at McCoy’s Public House. (Courtesy of Matthew Moore.)
Share this story

Should brewery and craft beer taprooms welcome parents and their children?

A recent Vinepair article titled “If You Don’t Want Kids at Your Local Taproom, You’re Missing the Point,” explored the question and looked at a new trend across the country. The article cited brewers and brewery founders around the United States who established taprooms where families, including their own, could spend time and foster a sense of community.

Local family-friendly taprooms such as Bier Station (120 E. Gregory Blvd.) provide a venue where parents may drink responsibly and spend time with family. Meanwhile, kids play and interact in a safe environment with parental supervision. Other taprooms have similar approaches.

“If I didn’t have my kids at my brewery, it wouldn’t be half the brewery it is,” Matthew Moore, co-owner of Martin City Brewing Company (500 E. 135th St.), said. “I’d say the exact same for our restaurants. I hope we live in a time where this is no longer a problem. I do hope [children] are on good behavior, but would expect the same if we are out anywhere else. Responsible parenting is responsible parenting.”

“Since children are a much beloved part of my family and friends, children are included in these celebrations, where beer and wine is enjoyed responsibly by adults,” Holle said. “When I studied in Germany, I experienced firsthand the culture that influenced the family and the social culture that I grew up with in the U.S.”

When Kansas City Bier Co. opened in 2014, Holle and his business partners “wanted to create a community gathering place much like in Germany that welcomed people of all ages, including families with children,” Holle said. “Biergartens and taverns have always been community places. We wanted our tasting room and Biergarten to support the continuation of that culture.”

Just off Southwest Boulevard, Boulevard Brewing’s Beer Hall (2534 Madison Ave.) has a host of family-friendly options on and off the menu.

“We carry seven varieties of locally-made Polly’s Pop,” Beer Hall general manager Mandy Waters said. “Our board games include kids’ games that beer-loving adults can play too. The photo booth is especially popular with kids.”

Waters also addressed whether family-friendly taprooms were important to the livelihood of breweries that serve multiple generations of adults and their families.

“Absolutely. We see kids almost every day, especially during summer travel season,” Waters said. “Often parents have accompanied their kids to Sea Life and Lego[LAND]. Then they come to Boulevard to reward themselves with our adult version of a discovery play place.”

Nicole and Matt McKinnie of KC Beer Tour have plans to expand their array of travel options on foot, by kayak and even by charter bus for out-of-town trips.

Established in October 2015, KC Beer Tour initially focused on organizing transportation for tours of craft breweries througher Greater Kansas City. A designated driver shuttles guests by bus or passenger van to one of six routes (current itineraries include stops in the Crossroads or North Kansas City).

“The Weston Experience is a five-hour trip to Holladay Distillery, Weston Brewing and Pirtle Winery in Weston, Missouri,” Matt said.

For the kayak and craft beer tour available from spring to fall, KC Beer Tour teamed up with KC Kayak and Canoe. The one-hour Missouri River kayak trip precedes a visit to two local craft breweries.

“You start at Kaw Point, kayak and float under five bridges, and end at the boat ramp at Berkley Riverfront Park,” Nicole said. “A bus picks you up and takes you to the breweries.”

KC Beer Tour is also developing walking tours that would utilize the KC Streetcar. Tourists would meet at Union Station, depart at a Crossroads stop for taprooms on or near 18th Street, and then continue by streetcar to the River Market, where Strange Days Brewing is located.

“We want to incorporate some local history on the tour,” Nicole said. “After a trial run, we want to expand walking tours to wineries and distilleries too.”

Also available, Destination Brewery Tours that will head to Omaha or Lincoln, Nebraska, for a four-brewery tour. The trip includes charter bus service for up to 50 people and double-occupancy rooms for an overnight stay on a Saturday.

Boulevard’s Manhattan Cask is out now. (Courtesy of Boulevard Brewing.)

Casual Animal Brewing Co. (1725 McGee) kicks off Local Motive, a program designed to give back to the community. Two dollars of every pint sold from the Local Motive tap benefits a different non-profit each quarter. BikeWalkKC is the inaugural nonprofit for the program. Starting at 6 p.m., play bike trivia, enter a raffle drawing, win swag and drink BikeWalkKC Local Motive Pale Ale.

Doughnut Lounge will make Black Squirrel-infused doughnuts to pair with stout flights. Also, join in a raffle for limited quantities of reserved bottles of 2018 Black Squirrel.

The Brewkery (1443 Swift St., North Kansas City, Missouri) officially opens its kombucha taproom. Several of its kombuchas, made in-house, will be on tap. Growler fills available.

Brew Lab (7925 Marty St., Overland Park, Kansas) welcomes two homebrewers, who will scale up a recipe for a Mount Anderson Vanilla Milkshake Porter. This beer won the 2015 High Plains Brewhoff and has finished in the top five category for four years in competition. Eat lunch, have a beer, ask the head brewer questions and observe as the homebrewers craft this beer on a large-scale system.