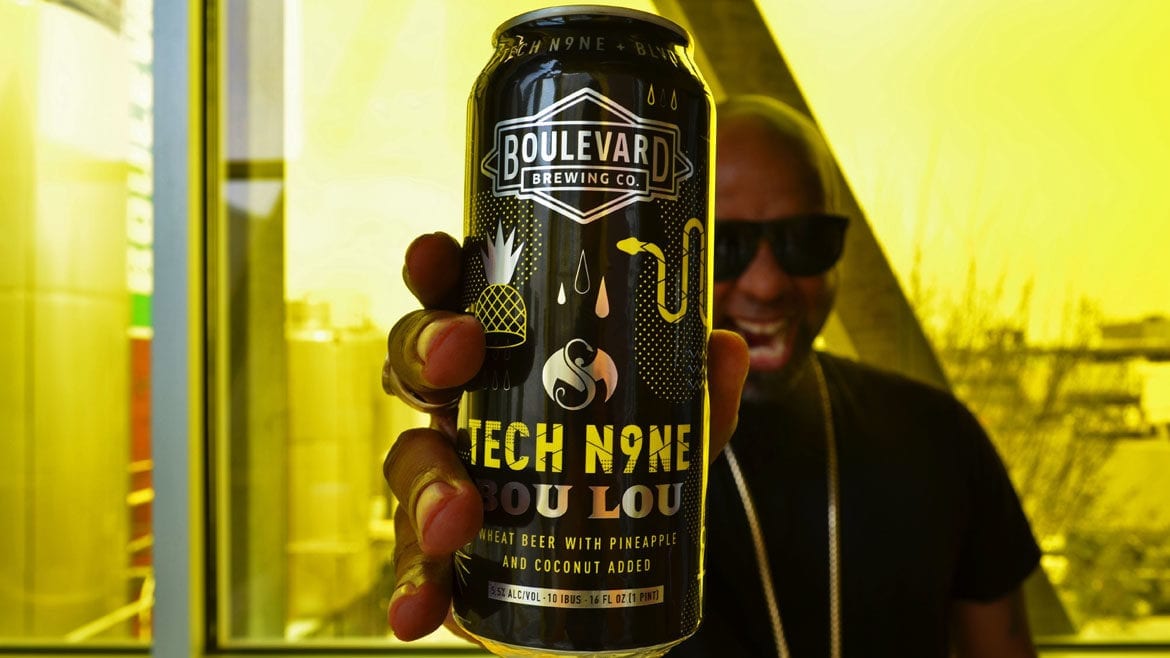 Kansas City-based artist Tech N9ne’s influence has expanded beyond hip-hop to inspire Boulevard Brewing’s upcoming limited-release, Bou Lou. Set to debut at Boulevardia June 15 and 16, Boulevard’s Bou Lou is a tropical variation of the brewery’s Unfiltered Wheat with additional flavors of pineapple and coconut. The beer is inspired by Caribou Lou, a potent drink prepared with pineapple juice, rum and coconut rum.

Along with the release of Bou Lou, Tech N9ne will top the bill with a performance at Boulevardia on Friday, June 15. Starting Monday, June 18, Bou Lou will be available as a limited-release in four-packs of 16-ounce cans in select markets including Kansas City; Lawrence, Kansas; Wichita, Kansas; Springfield, Missouri; and Denver.

“Tech came up with this drink in the ’90s,” Guin said. “He concocted Caribou Lou while hanging with friends.”

Tech N9ne popularized the drink in the song “Caribou Lou” from the artist’s 2006 release “Everready (The Religion).” Sales of Tech N9ne’s song earned a platinum record in June 2017 after selling more than a million units.

“Boulevard toured our facility and saw how we conduct business,” Guin said. “This is only the third partnership we’ve done in 19 years.”

Once Boulevard created a test batch, Strange Days’ co-founders and crew visited the brewery for a tasting.

“They nailed it the first time,” Guin said. “There wasn’t a single change. The coolest part of this was that the brewery took the collaboration seriously. They took time and energy to get the taste right.”

The Brewers Association announced the results of the prestigious 2018 World Beer Cup awards on May 3. Kansas City Bier Co. (310 W. 79th St.) won a silver medal for its Winterbock lager, a winter seasonal (8.25-percent ABV) in the German-style Doppelbock category.

The awards were presented at the conclusion of the Craft Brewers Conference & BrewExpo America at Music City Center in Nashville, Tennessee. A panel of 295 judges from 33 countries evaluated more than 8,200 beers in 101 style categories from 2,515 participating breweries.

“Our mission has always been to brew authentic-tasting German-style beer and deliver it with the same character, flavor and freshness as beer brewed and consumed in Germany,” KC Bier Co. managing owner Steve Holle said. “We went to great lengths to brew Winterbock in the traditional way, double decoction, natural carbonation and eight weeks of cold lagering. We’re honored that the judges recognized the flavor contributions of these time-honored brewing methods that helped Winterbock stand out among the 79 entries in this category.”

Border Brewing has new tap handles and a sour variant of its Strawberry Blonde to check out in the East Crossroads. (Contributed | Border Brewing)

As of Saturday, May 5, Brew Lab (7925 Marty St.,Overland Park, Kansas) met its goal of having 12 beers on tap, a first since opening last summer, founder Kevin Combs said.

Border Brewing Company (406 E. 18 St.) has released a sour variant of its best-selling Strawberry Blonde. The taproom also has brand new wooden tap handles bearing the names of its beers.

Double Shift Brewing Company (412 E. 18th St.) has Bonk! IPA (6.3-percent ABV) on tap. A collaboration beer with Velo Garage and Tap House, the beer was designed for drinking after a robust bike ride. Citrusy and juicy, the IPA was made with Citra, Azacca and Mosaic hops, plus added tangerine peel for extra bite.

Strange Days Brewing (316 Oak St.) will release a Mexican IPA, created with jalapeños and lime peel, on Thursday, May 10, at the taproom.

On Friday, June 15 and Saturday, June 16, at the fifth annual Boulevardia festival, Boulevard Brewing will release Boulevardia Sour Grisette on tap. The collaboration beer was made with 2nd Shift Brewing, Central Standard Brewing and Mikkeller Baghaven.

“We brewed the base beer last June with select ingredients from our collaborating partners when they were in town for the 2017 Taps & Tastes,” Boulevard brewmaster Steven Pauwels said. “After nearly a year aging in oak with native cultures selected by our lead brewer Ryan McNeive, Boulevardia Sour Grisette pours a honey-golden color and features flavors and aromas of lemon peel, honeydew melon and bright lactic acidity. Accented by notes of vanilla and oak contributed by aging, this rustic, sessionable sour beer is light and airy with a crisp, quenching finish.”

Gordon Biersch Brewery Restaurant (11652 Ash St., Leawood, Kansas) taps its Heroes Ale at a benefit for Kansas City Area first responders’ families in need. One dollar of every 21-ounce Gordon Biersch beer sold will be donated to support first responders. Enjoy a complimentary appetizer buffet, bring the kids to see a fire truck and police motorcycle, participate in a silent auction, and listen to live music from Aaron Lucero.

Cinder Block Brewery hosts a Kitten Shower benefiting KC Pet Project from 6 to 8 p.m. Four-legged feline babies need care when they arrive at the shelter, which is fully responsible for supplies and medical care. At this event, guests purchase items from a wish list, bring it to the shower and may receive kitten cuddles in exchange. Cinder Block Brewery will donate one dollar from every beer sold to the nonprofit. KC Pet Project will answer questions about the organization, the Bottle Baby Squad and fostering.

Swagger into International Tap House for an East Coast versus West Coast battle of brews from Sierra Nevada and Dogfish Head. Jack some swag and be “Cool Like Data” as ’90s hip-hop plays all night.

Brew-B-Que KC (633 N. 130th St., Bonner Springs, Kansas) combines two of the area’s finer things in life: barbeque and beer. From noon to 4 p.m. at the Kansas City Renaissance Festival grounds, local barbecue food trucks compete for the bragging rights of having the best barbecue in Kansas City. Guests eat, sample more than 100 craft beers from local and regional craft breweries, listen to live music, and participate in competitions. Tickets are $55 for VIP, $35 for general admission, $5 for designated drivers.

Rock and Run Brewery and Pub (110 E. Kansas St., Liberty, Missouri) offers a brunch from 9 a.m. to 2 p.m. in honor of mothers on Mother’s Day. The menu includes prime rib, country-fried chicken, pancakes and omelets, along with the regular full menu at 9 a.m. RSVP at 816-415-2337. Flowers will be available to the first 50 mothers.

Martin City Brewing Company (500 E. 135th St.) offers a limited release of Poitier, a Brandy Barrel-aged Tripel, in four-pack cans and draught. “We started with a beer inspired by the Belgian Tripel and then aged it in fresh brandy barrels,” head brewer Nick Vaughn said. “A striking amber color, the Tripel has an aroma full of malty sweetness, clove, banana and grape. The flavor matches the aroma, but adds a light spiciness, subtle touch of alcohol and a smooth caramel.”