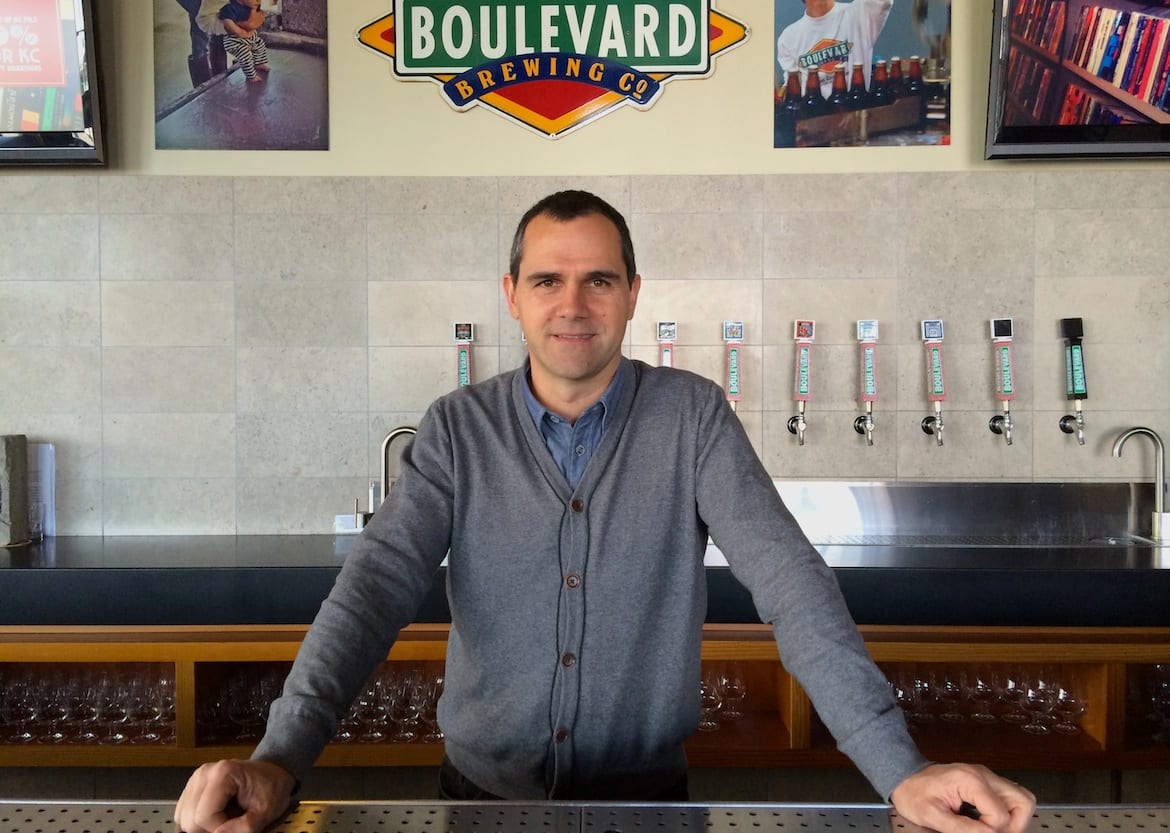 Boulevard Brewing Company has teamed up once again with Christopher Elbow Chocolates to make its seasonal Chocolate Ale. This beer is infused with cocoa nibs, or chopped roasted cocoa beans, in the brewing process to create the drink, which has been in high demand. Shipments of Chocolate Ale bottles were delivered to liquor stores across the metro today, but are quickly selling out.

Brent Windler, who works at the Berbiglia Wine & Spirits at 31st and Gillham in Kansas City, Mo., said the store sold out of the ale by 3:30 today.

Chocolate Ale was first released in 2011, and, according to Boulevard Brewmaster Steven Pauwels, sold out in minutes. Pauwels said they nearly doubled production in 2012, but ran into some quality issues. The company did not produce the ale in 2013 but has increased production this year to hopefully meet the demand.

Pauwels said that their main limitation to production levels is simply how many tanks Boulevard has available for brewing the seasonal beverage. Another consideration is sale projections made by the brewery’s wholesalers.

Pauwels is in charge of the collaboration on the Boulevard side. He said that even though there are other chocolate beers, he wanted this one to be different.

“When we started working with Christopher on this, we immediately agreed that we were not going to do a stout or a porter like anybody else does,” he said. Instead, they went with an ale, which has a lighter, paler body than other beers.

The Chocolate Ale is part of the Smokestack series of beers from Boulevard. This line of beer is more experimental than the rest of the beers that the Kansas City brewer produces. “What we try to do with Smokestack here is try to stay off the beaten path,” Pauwels said. “We try to make a beer that is a little different with a little bit of a wow effect.”

Christopher Elbow makes up the second half of the team. His passion for beer stems from when he would homebrew his own beer, so when he was approached to team up with Boulevard, he accepted.

“I love Boulevard beer and have a great amount of respect for that company,” he said. “To be able to work with them is fantastic.”

The process of creating the specialty beer, which Pauwels said is becoming a “staple” in Kansas City, takes a few months and a lot of cocoa to make.

“This year we are up to 3,000 pounds that we used, which I have to order about 6 months in advance to get them ready for us,” he said.

The taste of the drink may come as a surprise to first-time Chocolate Ale consumers. Even though it’s called Chocolate Ale, Elbow says it isn’t overly sweet.

“We ended up going for the cocoa bean flavor, not necessarily a chocolate flavor, which is quite different than if you pick up a chocolate bar off the shelf,” he said.

Both Pauwels and Elbow believe that part of the success of Chocolate Ale comes from the collaboration between them.

“One thing that has been really cool to see come out of this is the fact that KC gets so excited about hometown products,” Elbow said. “I think it’s a huge testament to the city that there’s that kind of support for local business and Kansas City–made products. It took us all by surprise how crazy the response was to this.”

Tap List | Chocolate Ale and Chili Are Your Winter Warmers

Waiter, there’s coffee in my beer. Or is it beer in my coffee?