When racing for a cure is personal

For some local runners, the KC Marathon is a chance to fight against leukemia 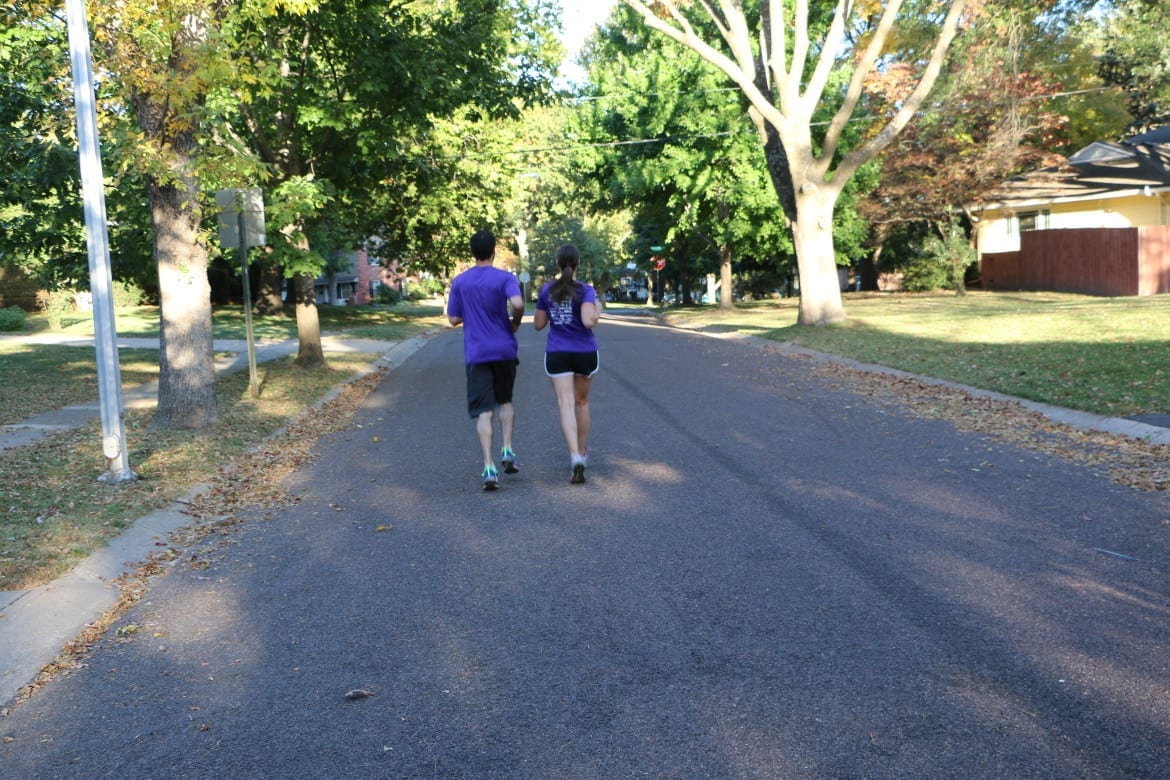 Emily and Paul Laskowski take off for one of their final runs in Overland Park before the KC marathon on Saturday. They are part of Leukemia and Lymphoma Society's Team In Training. (Photo: Daniel Boothe | Flatland)
Share this story

One was just your typical college kid, the other an infant not even a year old.

But then came Leukemia, a cancer of the body’s blood-forming tissues, including the bone marrow and the lymphatic system, that would turn their world upside down for them and their families.

It is the most common form of cancer in children and teens, and for two participants in Saturday’s Waddell and Reed Kansas City Marathon, the cancer will be the driving force in their run.

One runner is the college girl herself, the other, the father of the young boy.

For them, the marathon represents a finish line to a long and hard journey that began when leukemia dropped square into the middle of their lives. With no warning, the disease would change the trajectory of their footsteps forever.

The pair expect to be part of the purple-shirted “LLS: Team in Training,” which is running to raise money for the Leukemia and Lymphoma Society (LLS), which funds research and helps patients and their families.

Both runners told their stories to Flatland and explained why running for a cure is so important.

EMILY LASKOWSKI: Failure Was Not An Option

Emily Laskowski knew something wasn’t quite right as she began her junior year at the University of Kansas five years ago. Her whole body hurt, but not in a way at all familiar.

The top of her head ached, her eye sockets hurt, and a mouth sore refused to heal.

Sure, she had been sick in the past, but not like this. A college girl full of life and possibilities didn’t feel like this.

The initial diagnosis was a sinus infection. No big deal. Take some antibiotics and get some rest.

Two days later, Laskowski called the doctor back and told him she felt worse. Something had to be wrong. The doctor ordered her to the emergency room where they would get to the bottom of things with a ct scan of her sinuses.

Doctors at Lawrence Memorial Hospital thought Laskowski probably had meningitis. But her blood work revealed something much worse – leukemia.

A doctor told her a helicopter was on its way to take her to the University of Kansas Medical Center in Kansas City, Kansas.

“Here I am a 20 year old who just found out she has cancer,” she said. “I was in shock, horrified, nervous, and scared. I just didn’t know what was to come.”

“I found out on a Wednesday morning and started my chemotherapy that very night,” Laskowski said.

Still in shock, and taking things moment by moment, it wasn’t until Laskowski came home before her second round of chemo that the reality of her condition finally hit her.

“A family friend who is a beautician had also been through chemotherapy,” Laskowski said, “and she shaved my head for me. When I looked in the mirror for the first time was when I actually felt like a cancer patient. It made it all the more real.”

Treatment made it worse.

“I got horrible mouth sores and couldn’t eat,” she said. “Because it hurt to talk, I had to write on a dry-erase board to communicate. I got horrible spinal headaches from the chemo I received in my spine,” Laskowski said. “I couldn’t be out in public, couldn’t go to restaurants, couldn’t have visitors, and basically had to be confined to my home or in the clinic receiving treatment at all times,” she said.

Through it all, however, her boyfriend, Paul, was with her every step of the way. The couple got married in June.

“He saw all of the horrible side effects — not having hair, getting sick — it was a true test of our relationship, and I think we love each other more deeply for that reason,” Laskowski said. 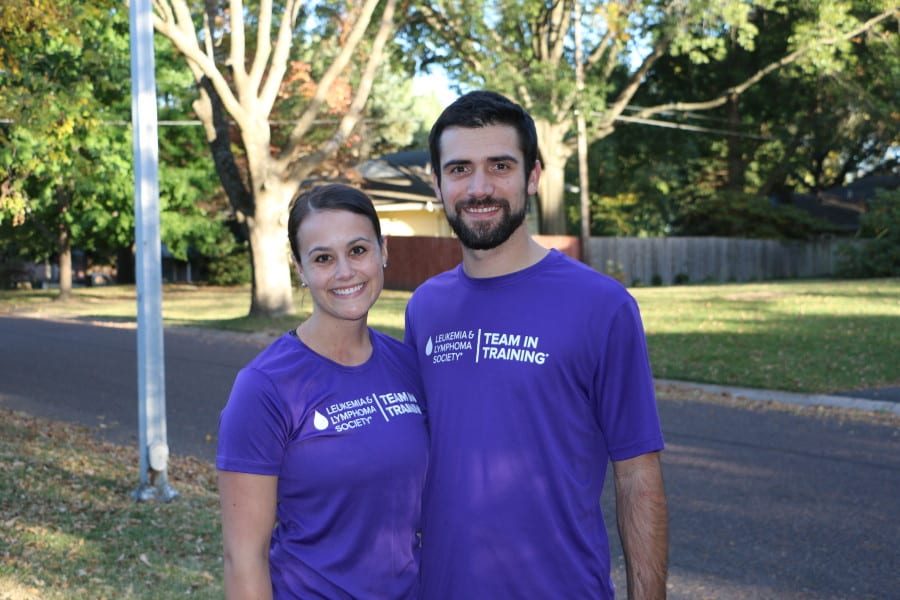 Laskowski’s leukemia is now in remission.

She knows there is a chance that it could return, but she isn’t worried.  She beat it once, and if need be, she will beat it again. Laskowski said it was her faith in God and an amazing support system that gave her the will to fight and beat the disease.

“Having my parents, my family and my husband, I just never once let myself think for a second that I would not beat this cancer, it was not an option,” she said. “I was going to beat the battle no matter what it took.”

She and Paul plan to run the 13.1-mile half marathon. Neither one of them is a long-distance runner.

However, one thing will push her through the finish line.

“I will be thinking about all of the cancer patients who are going through what I went through five years ago. When I want to give up, I will know I can’t because of them. They don’t have the choice to give up, so neither can I.”

In January of 2012, as Tyler Hilker and his wife were planning a family trip to Arizona, the youngest of their three sons suffered a ruptured eardrum.

The doctor prescribed antibiotics for 8-month-old Isaac. They took him for a follow-up visit when they returned from their vacation, thinking nothing of it.

The pediatrician told the Hilkers that Isaac seemed a little small, and he wanted to do some blood tests. He thought Isaac might be anemic.

They weren’t worried, since both of them had been small babies. But then the phone rang, telling them to meet an oncologist who was on his way to Children’s Mercy Hospital.

The couple rushed to the hospital, not quite understanding what leukemia was, just knowing that it was some form of cancer. It was baffling. After all, Isaac didn’t appear to be sick.

Once in the ER, the oncologist delivered the bad news. Isaac had infantile acute lymphoblastic leukemia.

Tests showed Isaac’s white blood cell count had exploded, and steroids were doing nothing to stem the tide. Doctors walked a tightrope in trying not to cause a heart attack by reducing the white blood cells too fast.

“So that was just great. Our kid has leukemia and now he is going to have a heart attack,” Hilker said. “That was the longest day, there is so much uncertainty in the beginning.”

For the first four weeks of treatment, Isaac would have chemo drugs running through his veins almost continuously.

After the first month, it looked like the leukemia was in remission. Unfortunately, that didn’t mean chemotherapy could stop. Leukemia will be impervious to future chemotherapy if the treatment is stopped prematurely, Hilker said.

“The problem with leukemia is that since it is a blood-borne disease, you can never know for sure that it is gone,” he said. The treatment would have to continue for the foreseeable future.

Isaac would spend the next two years in chemotherapy.

For leukemia patients, Hilker said, it is not always the cancer that is deadly. It is the sickness that comes from an immune system so rundown it can’t fight back.

For Isaac, his immune system had broken down to the point he had contracted a fever of 104 degrees. He spent a week in the pediatric intensive care unit.

“That was our first real brush with death,” Hilker said.

Things got worse. Isaac had somehow gotten a form of e coli in his system and developed hemolytic uremic syndrome, a life threatening disease that causes the kidneys to clog up with bacteria and ultimately fail.

Because of Isaac’s weakened immune system, the doctors couldn’t seem to stop it. Isaac’s kidney’s began to flood. The fluid then flowed into his lungs, and his lungs began to fail. When his lungs couldn’t get enough oxygen to the heart, Isaac’s heart began to fail as well.

The doctors put him into a medically induced coma and performed surgery, opening him up through his stomach to drain the fluid. Isaac’s organs were so swollen, they couldn’t sew him up. They would have to surgically cover them with protective plastic and let them deflate before they could fit back in his abdomen.

After two years of chemotherapy, Isaac received his last dose. It takes about six months for chemotherapy to leave the body.

Over the next six months, Hilker said he and his wife began to see their son’s personality shine through.

“It was amazing, it was like we were meeting a new kid everyday,” Hilker said. “It was like he was waking up from being sick for two years, we just started seeing this great playful kid we had never known before. It was wonderful.” 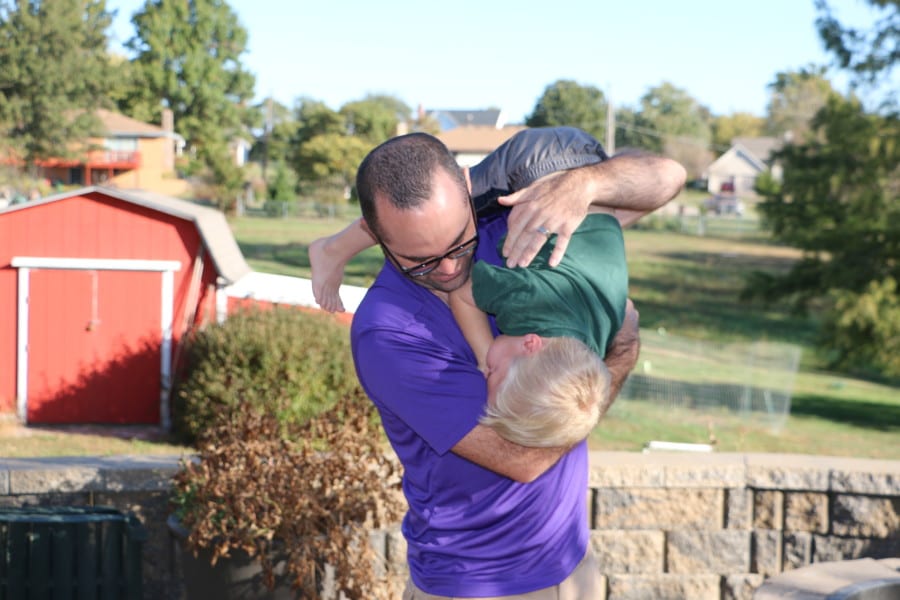 Four-year-old Isaac is literally the poster child for Children’s Mercy’s advertising campaign. You can see the billboard of Isaac at southbound Interstate 35 and 20th Street in downtown Kansas City.

While there is a chance he could get sick, Hilker said they aren’t planning on it. It’s time for Isaac to be a regular kid, ride his bike, and play with his brothers outside.

Hope is mandatory when it comes to fighting cancer, Hilker said. On Saturday, Hilker will run the half marathon hoping that the LLS will eventually find a cure.

“The reason I love LLS is the work that they are doing,” Hilker said. “It’s remarkable where they are going with these new therapies. It is not just about curing cancer, it is about vastly improving the quality of life in treatment.”

As he runs, Hilker said his son’s battle will be the motivation to cross the finish line.

“I am not the world’s most mentally tough athlete,” Hilker said. “But I can certainly keep going for another few miles. Isaac has gone through way more pain than I ever have. I can push through this.” 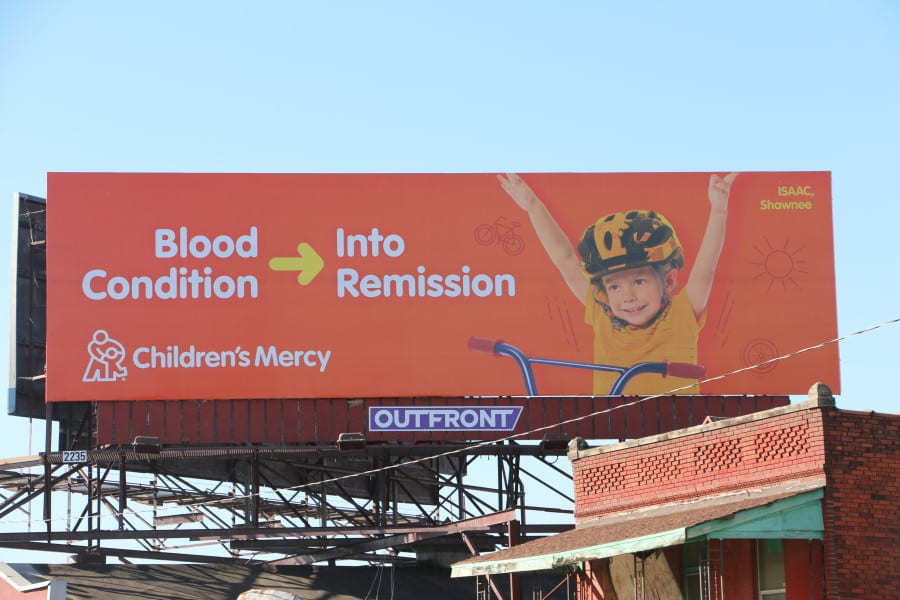 The Waddell & Reed Kansas City Marathon with Ivy Funds will start at 7 a.m. Saturday. Starting downtown, the full marathon passes through Midtown, Westport, the Plaza, Hyde Park and The Paseo. Click here for a map of the route.

A Quick, Clickable Roundup Of Health News From Our Region — And Beyond — For The Last Week Of July

Sympathetic Vibrations | Beats for a Cause

Combating Cancer with a Vaccine

Truman Med looks to be on cutting edge of cancer research