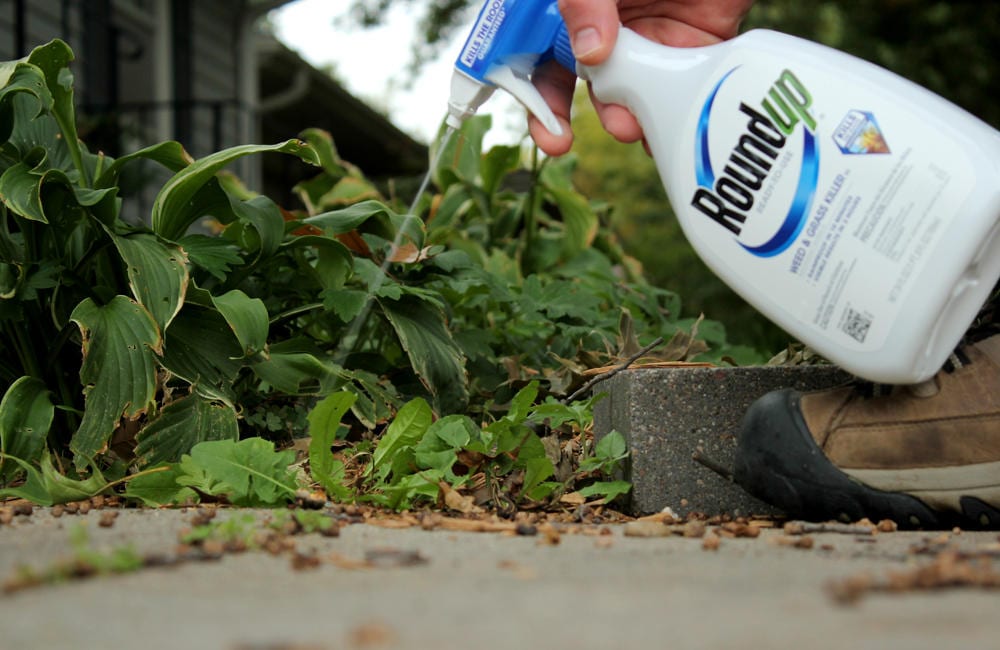 The vast majority of glyphosate is used on farm fields, on crops that are modified to withstand the herbicide. But it is also common on lawns and gardens. (Photo: Grant Gerlock | Harvest Public Media)
Share this story

After dueling reviews of research studies, scientific panels from the U.S. government and the World Health Organization are having a hard time agreeing whether glyphosate, the most common weed killer in the United States, can cause cancer. Known by the brand name RoundUp, glyphosate is sprayed on farm fields and lawns all across the country.

The U.S. Environmental Protection Agency is currently reviewing the safety of glyphosate for the first time since 1993. As part of its scheduled review, the agency examined dozens of glyphosate studies and decided that it is “not likely to be carcinogenic to humans at the doses relevant to human health.”

Last year, however, IARC – the International Agency for Research on Cancer, which is part of the World Health Organization –  classified glyphosate as “probably carcinogenic to humans.”

So why the discrepancy?

One difference is in the evaluation of “risk.” The EPA puts an emphasis on deciding whether glyphosate is likely to cause cancer at normal exposure levels. IARC wants to know if cancer is possible, even at very high, experimental doses.

For instance, a number of studies showed glyphosate may cause tumors in lab mice at extreme doses. The IARC panel found that to be significant because the instance of cancer increased as the dose increased. The EPA, on the other hand, said the doses were so much higher than what people encounter through their work or diet that the results were not meaningful.

The EPA came down along similar lines on studies showing the effects of glyphosate at the cellular level. “The only positive findings reported,” the EPA report said, “…were seen at relatively high doses that are not relevant for human health risk assessment.”

Aaron Blair, the epidemiologist who chaired the glyphosate panel at IARC, says that shows the difference between the hazard assessment at IARC and the risk analysis done by the EPA and other regulatory agencies.

The EPA tries “to determine at what level (it is a risk),” Blair says. “Where hazard assessment, it’s just, ‘What do you know? Do we have worry at any level that this stuff might represent a hazard?’”

Another difference is that IARC only looks at studies published in scientific journals in an attempt to avoid conflicts of interest. IARC considered hundreds of studies, but left out research done by the chemical industry.

Donna Farmer, a toxicologist with Monsanto, the company that discovered glyphosate as an herbicide in the 1970s, says the IARC review did not include research conducted by Monsanto according to EPA guidelines. Safety reviews from the governments of Canada, Japan, New Zealand and Australia came to conclusions similar to those of the EPA, Farmer says.

“All of the other agencies looked at all of the data,” Farmer says. “And I will tell you IARC, in my opinion by the way that they evaluated the data, created a hazard that no one else has identified.”

What the EPA says is important. It is one part of how the agency decides how glyphosate is used. And the chemical is currently vital to Midwest farmers.

“Especially in the Midwest where our cropping system is corn and soybean,” says Amit Jhala, a weed scientist at the University of Nebraska Lincoln. “Right now glyphosate is the number one herbicide in Nebraska, as well as other states in the Midwest.”

Jhala says almost all the corn and soybeans grown in the U.S. are genetically modified to resist glyphosate, so the chemical kills only the weeds and not the crops. There is also resistant alfalfa, sugar beets and cotton. As those crops have become more popular, so has glyphosate.

In 1995, the U.S. used around 40 million pounds of glyphosate. By 2014, that number ballooned to 280-290 million pounds, according to estimates cited by the Environmental Protection Agency.

In addition to being used on farm fields, glyphosate is also a common herbicide for lawns, gardens, golf courses and parking lots. In fact, it is so universal that traces of glyphosate are found in streams, water supplies, and even some foods.

IARC has given cancer ratings that raise eyebrows. The insecticide malathion is a probable carcinogen, just like glyphosate. But so are red meat and wood smoke and hot drinks.

Blair says the point is to show scientists and regulators where more research is needed.

“You’d like to have a very clear determination the minute you look at things, but that rarely happens,” Blair says.

The EPA does say it would like more studies on human exposure to glyphosate. But those are difficult. Previous studies have shown a possible link to cancers like Non-Hodgkin’s Lymphoma, but NHL can take years to show up, so when it does it’s tough to pinpoint the cause.

The agency’s report also calls for more research on different formulations of glyphosate, that is, chemicals mixed-in to make the herbicide more effective. The EPA wants to know if the combination has an effect that the chemicals don’t have on their own.

Aaron Blair says the riskiest exposure to glyphosate comes when people spray the chemical and get it on their skin. So simple precautions like wearing gloves and goggles and cleaning up are worthwhile, whether or not it’s likely to cause cancer.

The EPA’s cancer review goes before a scientific advisory panel later this year. The agency is expected to wrap up its full review of glyphosate in 2017.