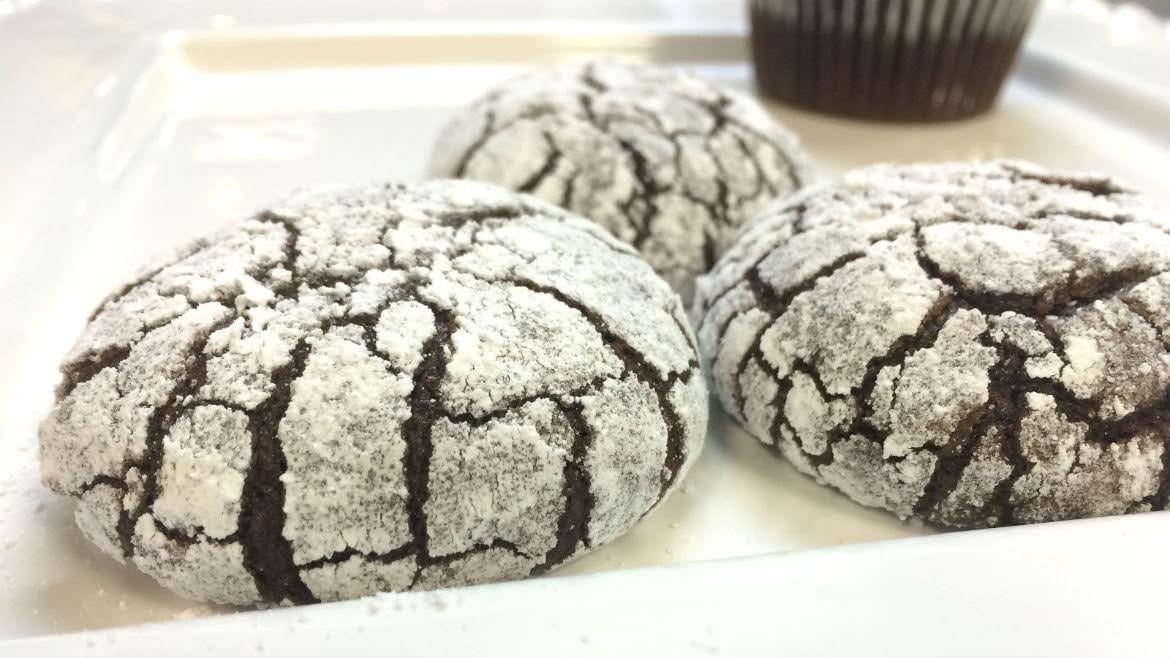 The remains lay open on the stainless steel table. The knife just a few inches from a deep cut that has split the victim down the middle.

“This is what we do,” said Robin Knight, owner of Emily Kate’s Bakery, nodding her head toward Erin Brown and the flayed cinnamon roll on a white plate between them. “We just keep testing things.”

The identity of Knight’s gluten-free bakery has taken shape over the past nine months in a small Prairie Village shopping center dotted with hair salons and a doggy daycare. Working with Brown, the owner of nearby Dolce Bakery, as a consultant, Knight has been attempting to perfect gluten-free cakes, scones, and cookies. On this Thursday, she’s doing the post mortem on what happens when she adds cream cheese to her cinnamon roll dough.

“I don’t want to make a product that’s a compromise. It has to be as good as the real thing, and that was not easy,” Knight said.

The cream cheese batch is still a work in progress — a recipe that likely may never make it to the pastry case. But that’s fine with Knight and Brown. Since last November, Emily Kate Bakery’s evolving pastry lineup has had an extended test run during Saturdays at Dolce.

“People aren’t willing to fail,” Brown said. “But Robin (Knight) has this willingness to run at all of this to get everything right. It’s extremely unique.”

Knight’s world changed five years ago when her eldest daughter Emily stepped off a plane on a trip home from college. Her weight had been fluctuating and she had been having regular headaches. After a series of test, Emily was diagnosed with a wheat allergy.

“She started crying. When I asked her why, she said, ‘I’ll never have a raspberry cream cupcake again,’” Knight remembered.

While in high school, Emily had been one of the first employees at Dolce and the raspberry cupcakes were her favorite.

“That’s when the mom in me came out, and I said ‘I’ll figure this out for you,’” Knight said

“She started crying. (…) ‘I’ll never have a raspberry cream cupcake again,’”
— Robin Knight, owner of Emily Kate’s Bakery, on the day her daughter was diagnosed with a wheat allergy.

Knight’s first instinct was to shop in the gluten-free aisle, but she discovered a dearth of fresh baked goods. So, she began experimenting in her own kitchen. Cookies led to cakes and cupcakes and chicken potpies. The journey of Knight’s family intensified when her younger daughter Kate was diagnosed with a wheat allergy, as well.

Knight, who has worked for 28 years in the advertising industry, wasn’t looking for another profession. But the creative director in her recognized that there was a need in the marketplace: other families who would want what she was making.

And so she had a kitchen built with mixers that have been power washed, sanded, and refurbished to remove any traces of gluten. She has a strict policy of not allowing gluten in the Prairie Village kitchen and only sources ingredients from suppliers with gluten-free certification. It can lead to some scavenger hunts, like her recent discovery that Hobby Lobby sells gluten-free sprinkles.

Knight’s process – documented in a pair of folders that always travel with her – is the same as when she was first baking at home. She starts with a pastry recipe and then she thinks about how she can make it gluten-free through a series of substitutions. Together with head baker Laura Coulter, she looks at whether gluten-free flour or applesauce or oil (or in the case of the latest cinnamon roll experiment, cream cheese) will give her the right consistency and flavor profile. Her cookies, for example, use a flour blend with almond meal, which adds fat (in lieu of more butter) without adding moisture or weakening the batter.

“It’s chemistry,” Brown said. “But it’s also a lot of trial and error. This is uncharted territory in some ways.”

As Brown and Knight dissect the cream cheese roll experiment, Coulter pulls a tray of oatmeal cookies out of the oven. The cinnamon rolls, which feature Dolce’s cream cheese icing, started as mini rolls — a factor of the dough cracking. Those cracks didn’t impact the taste, but they did break up that natural cascade of icing that makes children put their noses on the pastry case and shout with naked want.

Today, the cinnamon rolls are made in big muffin tins giving them the height of muffins and nooks and crannies to catch and hold a drizzle of icing.

“The cinnamon rolls are what we want to do,” Knight said. “They might taste different, but you wouldn’t pick it out of a lineup and say that’s gluten-free.”

Knight envisions Emily Kate’s as a wholesale bakery making custom gluten-free items for 10 to 20 clients. In addition to the cinnamon rolls, cupcakes, and cookies at Dolce, Knight is making savory scones for One More Cup in Waldo.

“We’re not going to change the world by making good cupcakes,” Knight said. “But if it gives someone that one little moment of happy, that’s worth it.”