Celebrating, Bemoaning the passage of time 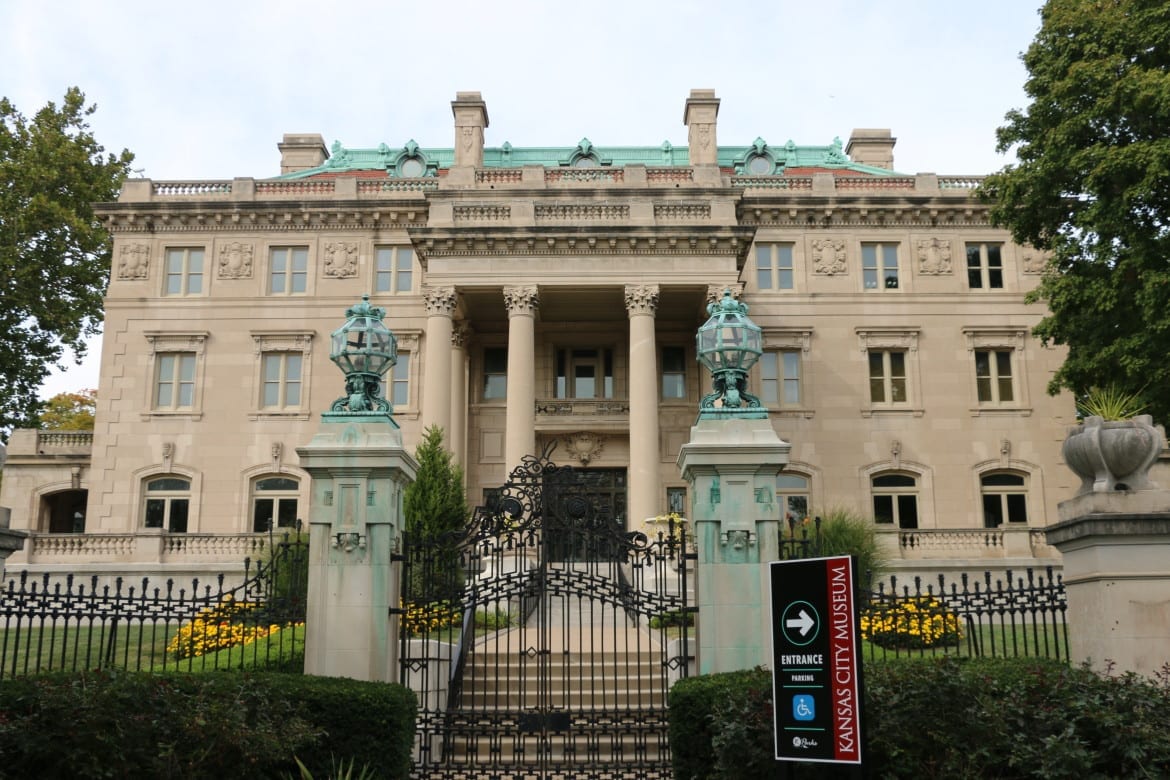 The Kansas City Museum at Corinthian Hall was built in 1910 and is Kansas City's first history museum. (Daniel Boothe | Flatland)
Share this story

The Kansas City Museum at Corinthian Hall is celebrating its 75th anniversary tonight, and it’s a good thing that the celebration is happening during the evening: In the light of day, the museum is clearly in need of a facelift – possibly an estimated $36 million dollar facelift.

Starting in 2005, the Kansas City Museum at Corinthian Hall began a site-wide historic restoration process with hopes of returning the mansion to its original glory. Ten years later, the project remains far from done and without a clear completion date.

Located in Kansas City’s Historic Northeast neighborhood, the Kansas City Museum was built in 1910 by R.A. Long, a local lumber baron and Kansas City philanthropist. Named “the Corinthian” after its six columns in the front, the estate was built from the ground up and became the first million-dollar home in Kansas City. After his death in 1934, Long bequeathed the mansion to his two daughters, Sallie and Loula. Already married, the two failed to find a buyer of the home during the Great Depression and subsequently donated the large estate to the City in 1939. One year later, the museum officially opened in 1940.

It would be Kansas City’s first history museum.

Today, the museum’s restoration efforts aim to boost the struggling neighborhood’s economy by bringing in tourists, and preserving an important symbol of the Historic Northeast community.

“The Kansas City Museum is an attraction that can draw new visitors into the area to see the shops, restaurants, and housing stock that the Historic Northeast has,” Councilmember and Mayor Pro Tem Scott Wagner told Flatland. “Attractions that draw people consistently are anchors that neighborhoods can grow from,” he said.

But currently, the project is millions of dollars shy, and years behind schedule. The museum’s artifacts have been removed and put into storage. So while the museum remains open, current visitors get a tour of a big empty house.

And the Historic Northeast is running out of attractions, Wagner says. The lengthy restoration process has become a source of frustration.

“The Kansas City Museum is the only remaining institution that has city-wide appeal that is located in the area,” Wagner said. That makes the restoration process that much more important to an area riddled with “a variety of pressures that affect housing, crime, and other issues,” Wagner said.

So what is taking so long?

The fight ultimately led to the firing of the museum’s executive director, Christopher Leitch, the dismantling of the KCMAB, and Union Station handing over control of the museum to the City’s Parks and Recreation Department in May of 2014.

Anna Marie Tutera, formerly the executive director of of the Wornall/Majors House Museum in Brookside, was hired as the new executive director of The Kansas City Museum at Corinthian Hall. Tutera, who grew up across the street from the museum, would now be put in charge of cleaning up the mess Union Station and the KCMAB had left behind.

Although the restoration of the museum is far from being done, Tutera does give some credit to Union Station’s contributions over the past 10 years, including a new roof for the museum and a working elevator.

“A lot of work was done in that time, but I think it was probably slower than the public would have liked it to be in large part because there wasn’t a site-wide, cohesive master plan with funding sources identified,” Tutera told Flatland.

However, she quickly adds, “I think the best possible thing for the museum is to be run by the Parks and Recreation Department.”

While Tutera, a Historic Northeast native, knows the importance of getting the museum up and running for the sake of the community, it is not something she says can be done overnight.

“The biggest challenge is having to build form and functionality into the property to create a museum environment that meets museum standards,” she says.

“For me, as the next director of the museum, I had to first review and assess what had been done and work on creating a plan of action for how to move forward. And that takes time,” she said. “But we are now working on a strategic master plan for the entire site and that should be done by late spring 2016. Then, we will move into design development and construction documents.”

While the museum needs to still raise millions of dollars, Tutera says tonight’s event is not about raising money, but more about  “celebrating 75 great years of a public museum,” she says. “So we want to honor that legacy and plan for the future.”

Hopefully it will be a future that sees not only a restored museum, but also a restored Historic Northeast, says Councilmember Wagner.

'Who Lived in the Kansas City Museum?'

You Asked, We Curated the Facts