And the State of the City Is … 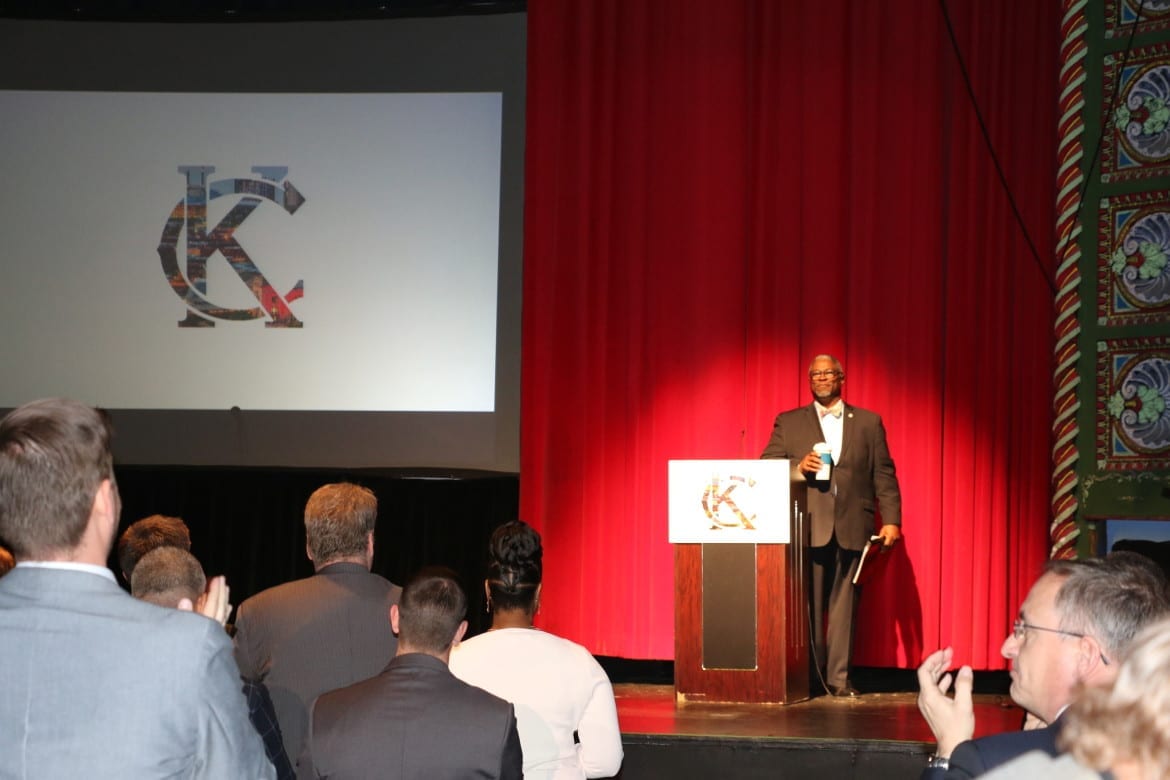 Mayor Sly James receives a standing ovation for his State of the City address Tuesday at the Uptown Theater. (Photo: Daniel Boothe | Flatland)
Share this story

1. Since Mayor Sly James has taken office in 2011, the city is doing a whole lot better, according to James.

James opened his speech talking about the terrible condition of Kansas City before being sworn in as mayor five years ago. Since then, he says, Kansas City has seen Google Fiber make its home here, an increase in tech entrepreneurship, the construction of the Kauffman Center for the Performing Arts, the emergence of the Smart City Initiative, a revitalized downtown, and a World Series Championship that concluded with a parade drawing 800,000 people downtown without a single arrest. While James did not personally take credit for these achievements, he did note that all of this has been accomplished under his watch.

2. If voters are happy with Kansas City right now, they need to pass the earnings tax April 5th. Or else.

Originally conceived in 1963 by Kansas City mayor Ilus Davis, the earnings tax takes a 1 percent cut from KC residents and people who work in the city. Generating around $230 million dollars annually, James said the earnings tax is the biggest source of revenue for the city and accounts for 45 percent of the city’s general fund, which pays for police, fire, trash, and other city services. If voters do not renew the earnings tax April 5th, James said the effect it would have on Kansas City would be devastating. He said the city would need to lay off more than 200 employees to make up the loss, half of those police officers and firefighters. Critics hoping to abolish the tax in St. Louis and Kansas City say it’s unconstitutional.

Must never forget that we invest in our city for future generations. #SOTCKC @KCMO https://t.co/qlnOeARv9Y

3. Being a Smart City means nothing if we don’t educate the next generation of Kansas Citians.

James spoke at length about the need for better education in Kansas City schools. Touting the success of City Year, Literacy Lab, and James’ organization Turn the Page KC, James said there is “momentum in the right direction” but still acknowledged a school system that is “neither right nor acceptable.” Displaying a map of schools throughout the city borders, James pointed out that four out of five schools that are located in affluent areas are considered high quality, while only one in five schools located in distressed areas are. “We as a community must apply pressure …. to increase access to quality schools for every child, regardless of their zip code,” James said.

"We need to do more to ensure that every child in KC lives near a quality school." #SOTCKC

4. James wants us to know he is sick and tired of the violence, and gun offenders are going to learn the hard way.

According to the city’s website, 109 people were murdered in Kansas City in 2015, an increase of close to 30 from 2014. James said that if Kansas City “can’t protect our kids from being gunned down in the streets or even in their very own homes, all the momentum we’re feeling as a city comes to a screeching halt.” Thanking Missouri State Representative Kevin Corlew for filing the legislation, James gave his support for HB 2236, known as the “Armed Offender Docket Pilot Project,” which aims to reduce the amount of violent crime in the Kansas City area by allowing the Jackson County Circuit Court to establish a separate criminal docket for gun crimes. “With a system in place to make sure justice is swift,” James said, “criminals might think twice before doing something tragic and cruel, like taking the life of a sleeping toddler,” he said, referring to Amorion Hale, a 3-year-old who lost his life last May when a bullet fired into his home as he slept.

I will work as hard as necessary to leave #KC not only better than I found it, but the envy of cities worldwide. – @MayorSlyJames #SOTCKC

Much to the surprise of the crowd, Mayor James concluded his speech by walking off stage only to have the curtain rise at the Uptown Theater with James taking center stage with a rock band. Busting out a pretty good rendition of  “Kansas City,” James held his own with the band and had pretty decent vocals. “Kansas City” uses lyrics written by Bob Dylan and was originally recorded by the New Basement Tapes, a rock super-group that includes Marcus Mumford, Elvis Costello, Jim James, and Johnny Depp.

.@MayorSlyJames confirms "adult beverages" may have been involved in conceiving idea of singing "Going Back To Kansas City" at end #SOTCKC

Daniel Boothe is a reporter for Kansas City Public Television’s Hale Center for Journalism. To reach Boothe, email him at dboothe@kcpt.org