The Wrong Eating Habits Can Hurt Your Brain, Not Just Your Waistline 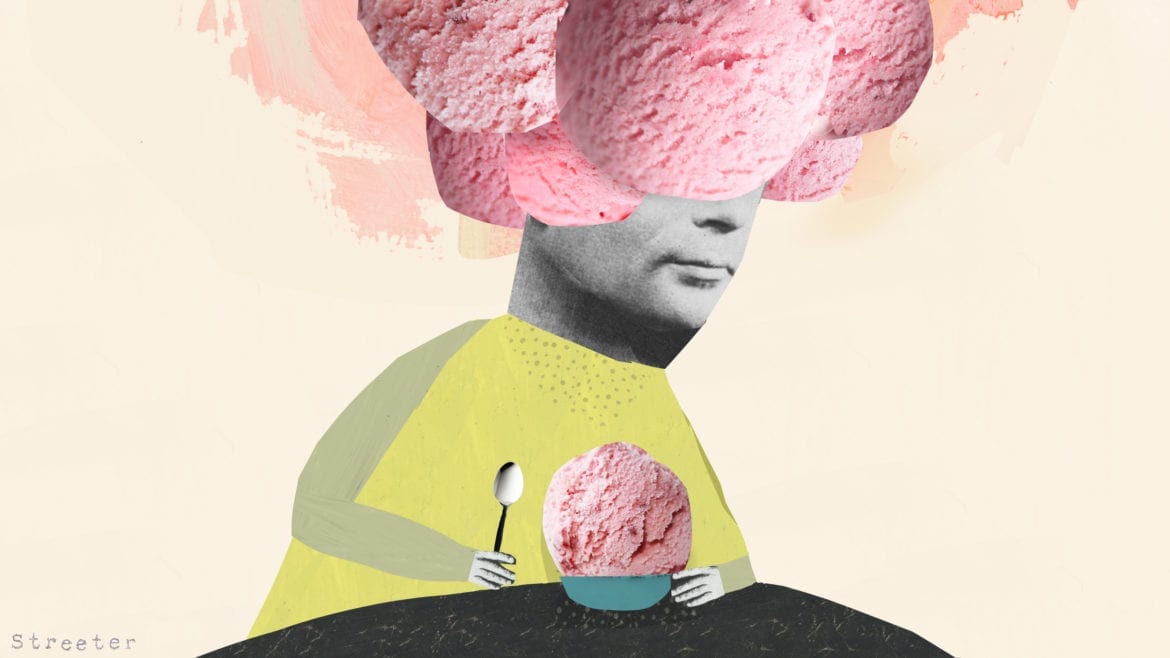 A diet high in saturated fats and sugars can affect the parts of the brain that important to memory. (Illustration: Katherine Streeter for NPR)
Share this story

Being overweight can raise your blood pressure, cholesterol and risk for developing diabetes. It could be bad for your brain, too.

A diet high in saturated fats and sugars, the so-called Western diet, actually affects the parts of the brain that are important to memory and make people more likely to crave the unhealthful food, says psychologist Terry Davidson, director of the Center for Behavioral Neuroscience at American University in Washington, D.C.

He didn’t start out studying what people ate. Instead, he was interested in learning more about the hippocampus, a part of the brain that’s heavily involved in memory.

He was trying to figure out which parts of the hippocampus do what. He did that by studying rats that had very specific types of hippocampal damage and seeing what happened to them.

In the process, Davidson noticed something strange. The rats with the hippocampal damage would go to pick up food more often than the other rats, but they would eat a little bit, then drop it.

Davidson realized these rats didn’t know they were full. He says something similar may happen in human brains when people eat a diet high in fat and sugar. Davidson says there’s a vicious cycle of bad diets and brain changes. He points to a 2015 study in the Journal of Pediatrics, that found obese children performed more poorly on memory tasks that test the hippocampus compared with kids who weren’t overweight.

He says if our brain system is impaired by that kind of diet, “that makes it more difficult for us to stop eating that diet. … I think the evidence is fairly substantial that you have an effect of these diets and obesity on brain function and cognitive function.”

The evidence is growing. Research from the Cambridge Centre for Aging and Neuroscience published in July found that obese people have less white matter in their brains than their lean peers – as if their brains were 10 years older. A more recent study from researchers at the University of Arizona supports one of the leading theories, that high body mass is linked to inflammation, which affects the brain.

But, if we understand how obesity affects the brain and memory, then maybe we could use that relationship to prevent people from becoming obese in the first place.

Lucy Cheke, a psychologist at the University of Cambridge, says her study in The Quarterly Journal of Experimental Psychology this November gives her some idea of how to do that.

Her researchers asked obese and lean people to do a memory task that’s a virtual treasure hunt. The subjects had to hide something in a scene across various computer sessions, then they were asked what they hid, where they hid it and in which session.

The obese people were 15 to 20 percent worse than lean ones in at all aspects of the experiment. The finding confirmed what other researchers had already seen in rodents. “This really picks apart spatial, item and temporal memory, as well as, crucially, the ability to integrate them,” which Cheke says is “one of the most fundamental aspects of memory.”

If you’re obese, she says, you might just be “10 to 15 to 20 percent more likely to not quite remember where you put your keys.”

Diet isn’t necessarily destiny. People can compensate. As American University’s Davidson puts it, “Let’s say I had a kid and I gave him a high fat diet and he showed hippocampal dysfunction. That kid may not do worse in school.”

But, Davidson adds, that the processes that help the kid do well in school may be impaired. When that happens, the kid would have to work harder, be more motivated, and “have a tougher go of it.”

Cheke says with the link between obesity and the brain growing as a field of research, we could see more ways of targeting obesity.

For example, if the issue is that the diet of obese people degrades their memory and makes them more likely to overeat, then maybe making their meals more memorable would help them eat less of the bad stuff. Cheke says there’s already some research showing that if you watch TV while you eat lunch, you’ll eat more and also be more likely to get hungry in the afternoon and later to eat more at dinner.

However, even though we are beginning to understand that obesity affects the brain, we don’t exactly know how, says John Gunstad, professor and director of the Applied Psychology Center at Kent State University in Ohio.

He points out obesity changes a lot about the body: blood sugar levels, the cardiovascular system, inflammation levels throughout the body. Any one of those things could affect the brain.

“Most likely, the effect of obesity on the brain is related to not just one cause but a combination of causes,” Gunstad says.

Davidson is also moving forward by studying how to break the vicious cycle of a Western diet, obesity, and brain changes. But he says the underlying idea that obesity affects the brain is clear.