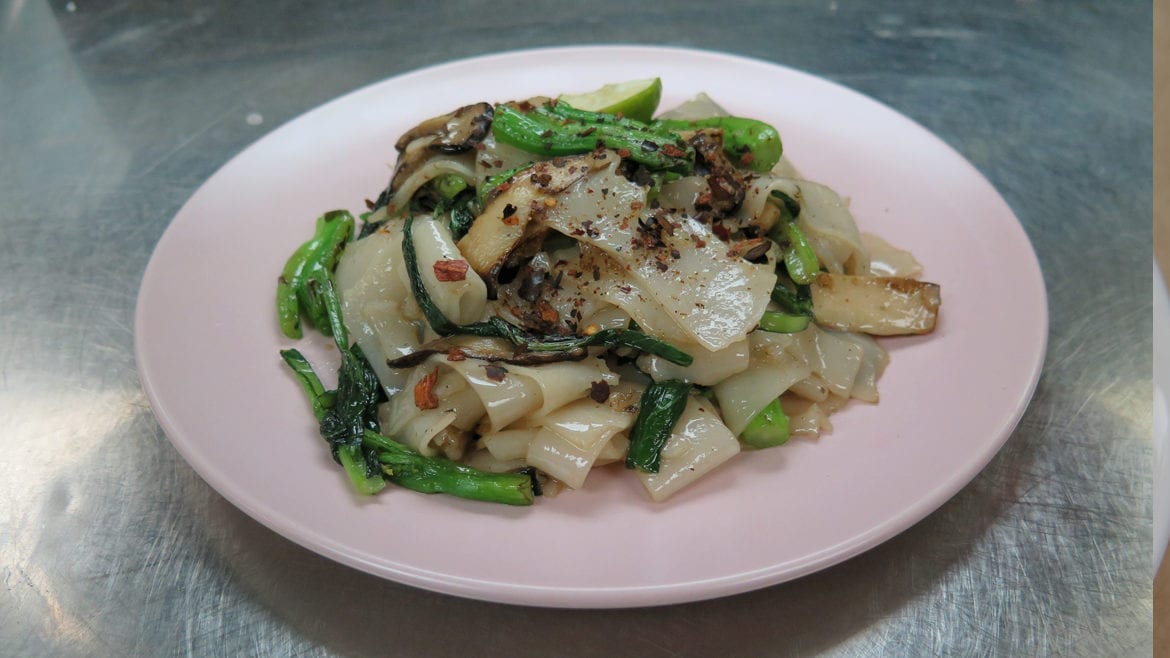 Aep is adding lunch and brunch service this week. This is their forest mushroom pad see ew. (Photo: Pete Dulin I Flatland)
Share this story

The Farmhouse (300 Delaware St.) is hosting its fourth annual Pajama Brunch on Sunday from 10 a.m. to 3 p.m. The staff will be wearing pajamas and diners are encouraged to do, as well. Think about pumpkin flapjacks or the Midwest Croque Madame with smoked provolone, ham and a sunny side up egg. Reservations are encouraged because it turns out we all love to dine out in our PJs. Call 816-569-6032.

You don’t often get a chance to see gangsters pretending to be pastry chefs. That is just one of the hijinks that unfolds during “The Drowsy Chaperone” — a terrific comedy that will transport you to the era of the flappers. Faust Theatre hosts four performances this weekend at the Arts Asylum (1000 E. Ninth St.). Tickets are $10.

If you’re ever going to go surf-and-turf, it should be on New Year’s Eve. The Kansas City area Houlihan’s have surf-and-turf and drink specials — the prosecco with a Pop Rocks rim seems appropriate. Ever wonder how animals ring in the new year? Celebrate Zoo Year’s Eve at the Kansas City Zoo from 10 a.m. to 2 p.m. The festivities are included with standard zoo admission. The Madrid Theatre (3810 Main St.) is hosting White Party II on New Year’s Eve. You can probably guess the attire. The doors open at 8 p.m. and the party goes until 1:30 a.m. Tickets, with unlimited well drinks included, start at $45.97.

Brewery Emperial (1829 Oak St.) is now open. The urban beer garden, from a team that includes head brewer Keith Thompson and Ted Habiger, has five beers on tap and is best thought of as a new take on a brewpub. The open kitchen kicks out dishes meant to be enjoyed with brews — start with the ESB (Extra Special Biscuit). Check out Flatland’s story about the new brewery from earlier this month.

The Gingerbread Village (2450 Grand Blvd.) will be up at Crown Center through Saturday. It’s open during Crown Center’s regular shopping hours. These are the kinds of gingerbread houses we should all aspire to build.

Since everyone has a long weekend of sorts, whether you have Monday off or will simply be recovering from your epic New Year’s Eve, we have restaurant news to share for the coming week. Aep Restaurant (1815 W. 39th St.) is going to start offering lunch and brunch this week. The brunch service will last from 10 a.m. to 2 p.m. on Saturdays. Here’s a piece about the new spot on the 39th Street corridor.