Swaying to the Music 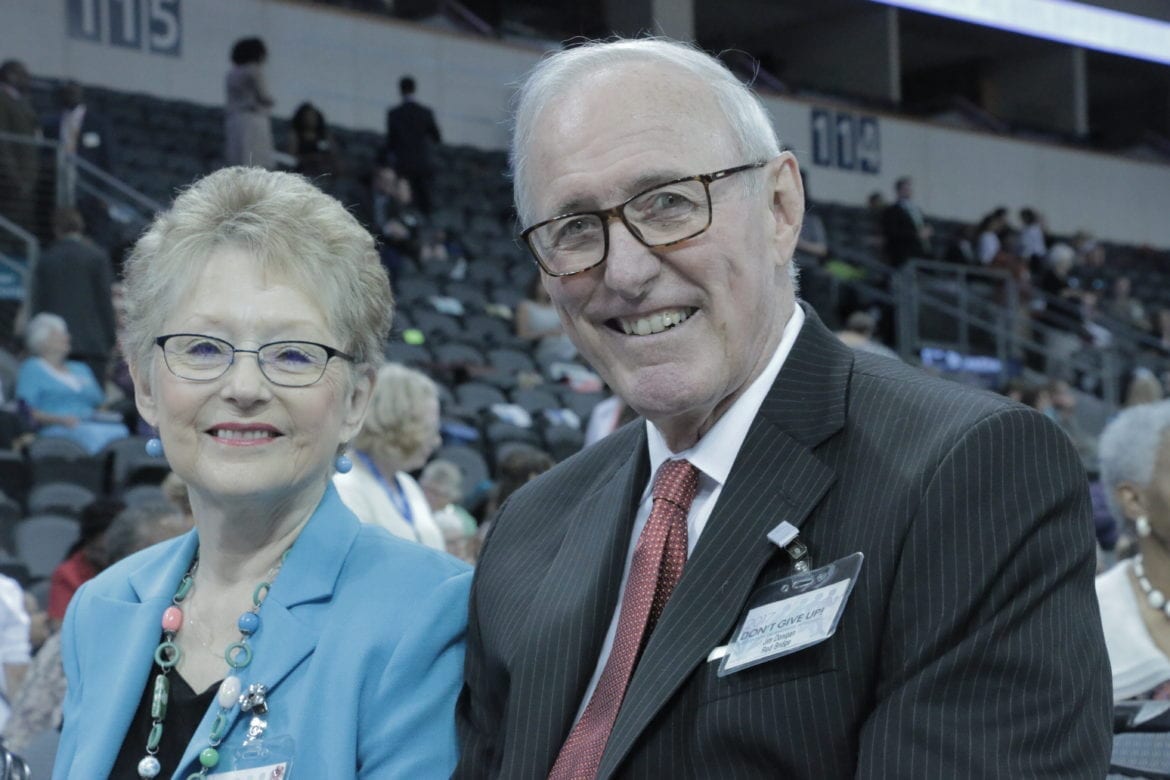 At happy moments, Jim and Leslie Donigan often find themselves dancing to “Quiet Nights of Quiet Stars,” the Andy Williams hit that has been their song since they first met at a pizza joint in Mission, Kansas, decades ago.

One of those dance-worthy occasions took place late last year, at the end of a long medical journey. The memory remains strong, even though they have hit a recent bump in the road.

As Jehovah’s Witnesses, they plan to attend the Midwest convention that runs today through Sunday at Silverstein Eye Centers Arena in Independence, Missouri. Organizers believe few attendees embody this year’s theme, “Don’t Give Up,” more than the Donigans, who are both 71 years old and live in Kansas City. About 5,000 people are expected to attend, said Craig Cochran, the convention’s media services coordinator.

The ability to be part of a global experience of faith is important to the Donigans, as they once again face medical uncertainty. “It’s like a spiritual family reunion,” Jim said. 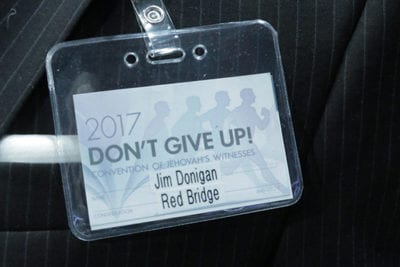 “Don’t Give Up” is the theme of this year’s Jehovah’s Witness conference. (Mike Sherry | Flatland)

Jehovah’s Witnesses believe in God, who is called Jehovah.  As Christians, they believe in heaven and salvation, but they do not believe in hell or eternal suffering.

Witnesses, as followers are called, believe the Bible to be the inspired word of God. However, they recognize some parts are symbolic and do not believe all parts of the Bible are to be understood literally.

Jehovah’s Witnesses also do not believe in blood transfusions, based upon their reading of passages in both the Old and New testaments. They cite Genesis 9:4, for example, where God says, “Only flesh with its soul — its blood — you must not eat.”

No ‘Cowards in the Foxhole’

On Oct. 1, 2004, Leslie fainted. That was abnormal for her, a runner who lives a healthy lifestyle.

Doctors could not pinpoint a cause, and later that month they understood why: They found a gastrointestinal stromal tumor, a rare cancer that leaves no blood marker. The tumor was growing on a section of the small intestine and was also threatening her pancreas.

The belief about blood transfusions was an obvious complication when it came to surgery.

So, the Donigans worked through a Jehovah’s Witnesses group in Brooklyn to find Dr. Marvin Romsdahl, a surgeon at MD Anderson Cancer Center in Houston, who performed a modified version of a common surgery to remove pancreatic tumors. The modified version did not require a transfusion.

The night before the surgery, the anesthesiologist backed out because of the risks of doing surgery without blood transfusions. “That’s good,” Jim told Romsdahl. “We don’t need any cowards in the foxhole.”

The surgery lasted 13.5 hours, but it was successful.

Jehovah’s Witness Gatherings Highlight Faith’s BeliefsAntonio Rosas is nearly blind from glaucoma, and his daughter, Gina, uses a wheelchair due to a rare neuroimmune disorder. So it’s hard for them to get out and worship with their fellow Jehovah’s Witnesses in their hometown of Wichita,…

Yet further treatment included a prescription for the chemotherapy pill Gleevec. The cost of the therapy, which Leslie said at the time cost $2,500 per month, brought them to the breaking point, even after using Social Security and Medicare.

“It’s always been more than we could swallow,” Jim said, “and progressively over time, it took everything.”

More bad news hit in 2008, when Jim lost his banking job during the recession. They had to sell the house they had built nearly four decades before, the same house where they had raised their three children.

But in one sliver of good news, a neighbor approached them during their garage sale and told them he would buy another house for sale on the block and then rent it to them.

Things began to look up, as Jim found another job, Leslie qualified for a hardship program that allowed her to take Gleevec for free, and then got off the medication altogether when her cancer went into remission.

The cancer returned, however, and Leslie must remain on Gleevec for the rest of her life. Now, Gleevec costs $13,000 per month, she said.

In April 2016, the family was tested again, when Jim started having shortness of breath.

Their first thought was a heart problem, but the first diagnosis was multiple myeloma, a form of incurable blood cancer. A second opinion was different, but not any better: a form of Non-Hodgkin’s lymphoma, which causes tumors to grow in the lymphatic system.

A PET scan revealed 100 tumors, and Jim started his own costly round of chemotherapy. 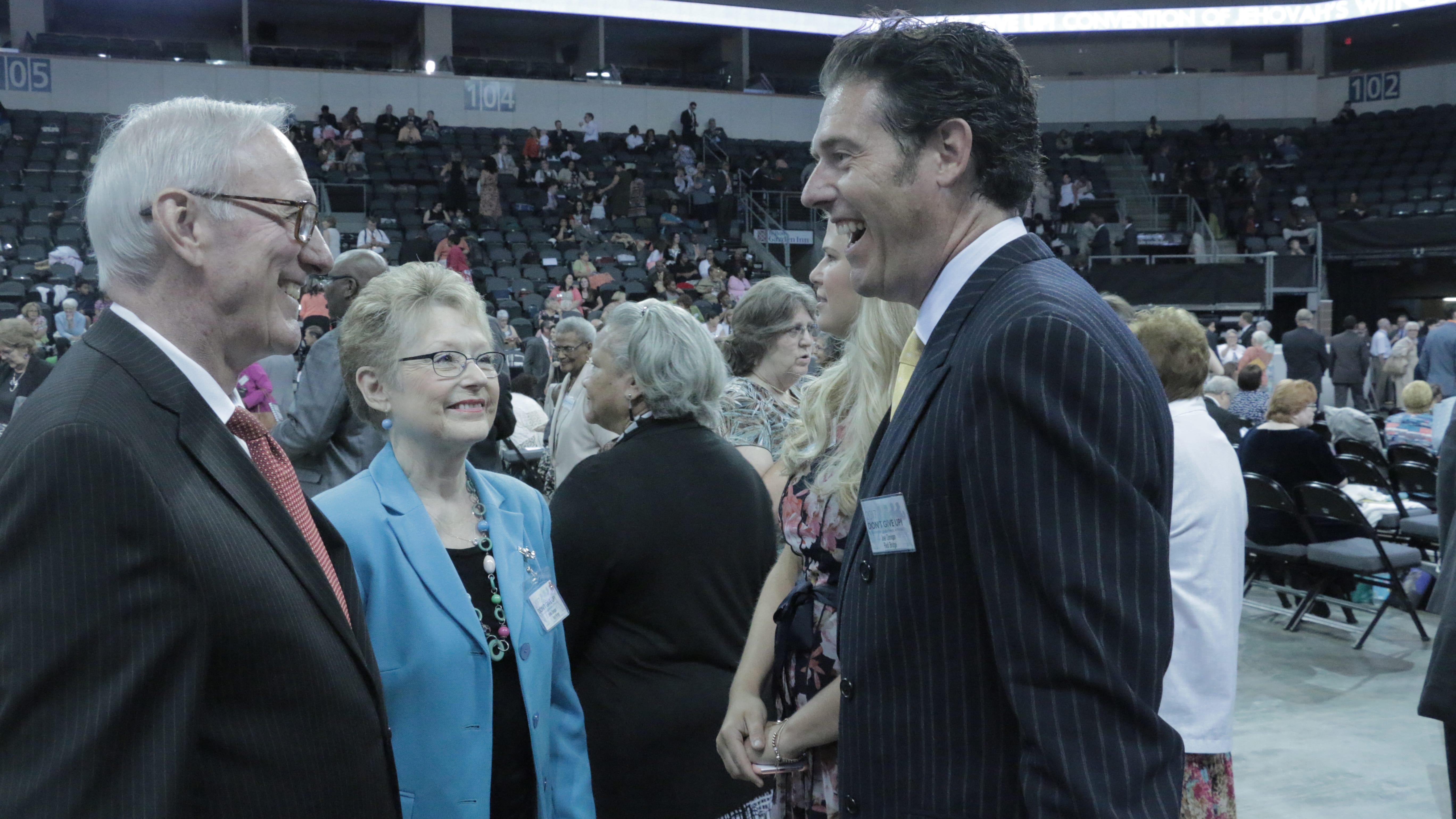 His lymphatic system failed during treatment, causing fluid buildup around his stomach and lungs. Jim suffered malnutrition when draining the fluid removed electrolytes and proteins.

By October, doctors gave him two months to live. Leslie got it in writing.

Yet as he sat in the hospital, saying his goodbyes, Jim had a thought: “Why couldn’t we take those fluids from my stomach and put them back into my heart, where they need to be?”

The question sparked an idea for one of Jim’s doctors, who inserted a shunt normally used to treat cirrhosis. Within two weeks, the fluid buildup was gone.

On Dec. 27, when he was home filing paperwork, Jim came across the letter telling him he only had two months to live. He did the math, and then they had an “I ain’t dead yet party.”

At the party, Jim sipped his first glass of wine in a year, and the couple danced once again to their favorite song. The luster remained up until this week, when an infection flared up around the shunt, and the fear of cancer returned.

This most recent medical challenge has shown Jim and Leslie how important their faith is in preparing them for the troubles that can lie ahead. The convention, and especially its theme, is coming at just the right time to help guide them through this newest trial, Leslie said.

“No one is shielded from the human experience,” Leslie said. “But personally, we find it better to be prepared to keep these types of relapses in their proper perspective.”

— Catherine Wheeler is a multimedia intern for Flatland. She is a graduate student studying journalism at the University of Missouri, Columbia. Catherine has a bachelor’s degree in English-Writing from Fort Lewis College in Durango, Colorado. She currently lives in Kansas City. You can reach her at cwheeler@kcpt.org