What the Hell? That’s What Local Seminaries are Asking 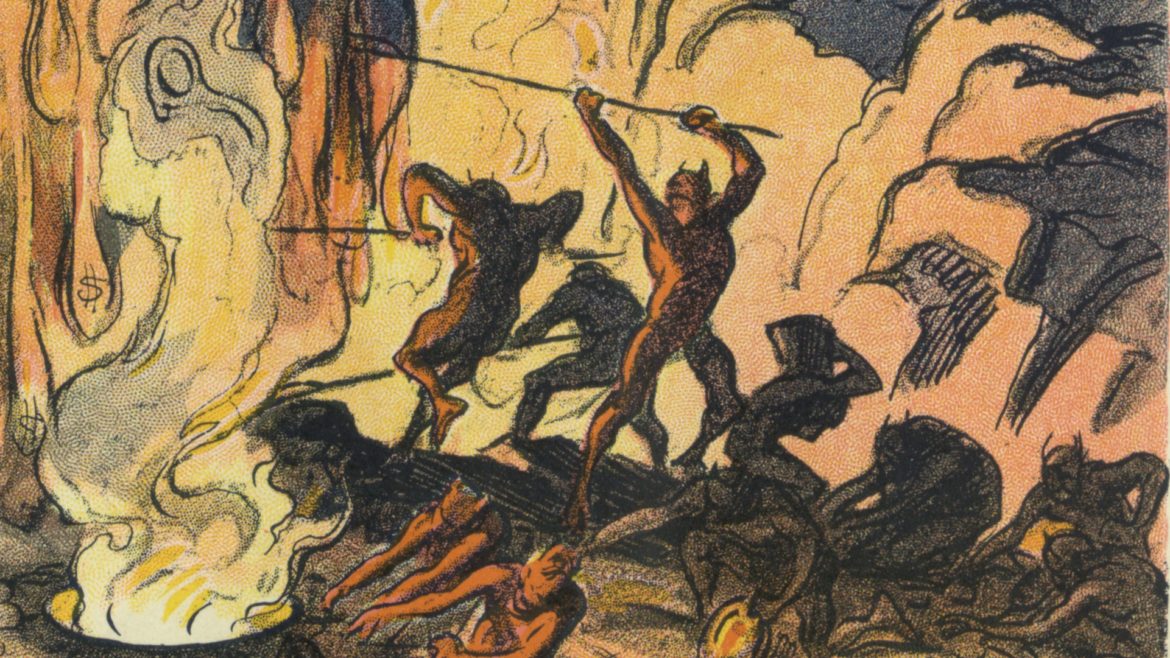 A snowball in hell - what chance has it got? By Udo Keppler (Courtesy | Library of Congress)
Share this story

Christian theologians are rethinking the idea of hell, and it’s moving seminaries and other religious schools in the Kansas City area to examine how they teach students about this ancient, disputed concept.

Hell hasn’t disappeared from the list of subjects these pastor-training schools cover, but such books as the just-published “That All Shall Be Saved” by Christian Orthodox scholar David Bentley Hart are kickstarting discussion about whether eternal torment for unrepentant sinners is really part of God’s plan to redeem the whole creation.

Hart insists an eternal hell doesn’t exist. One reason, he says, is that “a retribution consisting in unending suffering” is, finally, “nothing more than an expression of sheer pointless cruelty” and not in God’s character.

Hart isn’t the first biblical scholar to challenge hell. In fact, he says early Christian leaders were mostly universalists, the term applied to people who believe that God ultimately saves everyone. But, he asserts, the church needed a tool of control and chose fear of hell, a doctrinal position that eventually overwhelmed universalism. In more modern times, German theologian Karl Barth, in his massive 1940s work, ”Church Dogmatics”, is given credit (or blame) for a movement toward rejecting hell.

In any case, this intriguing debate has local seminaries examining what they teach, if anything, about hell. For some, it’s an easy question and no change is expected.

Midwestern Baptist Theological Seminary, for instance, requires its faculty to agree with Southern Baptist teaching. So, says seminary President Jason K. Allen, “our professors believe in and teach a literal hell marked by eternal torment and punishment, inhabited by people who never come to a personal and saving knowledge of the Lord Jesus Christ. While there is no particular class on the doctrine of hell, students encounter this doctrine in a variety of classes.”

Similarly, Calvary University President Christopher Cone says his school teaches its students about a literal hell and, as he has written, asks them to avoid “the Satanic temptation to deny God’s prerogative and promise to judge. God did promise death. Not only that, but He promised a second death — the lake of fire.”

At the other end of the spectrum is Unity, the spiritualist path created here by Charles and Myrtle Fillmore. Ellen Debenport, vice president of content and media strategy for Unity World Headquarters, told me that “Unity has always said that hell and heaven are a state of mind and not a literal place. That might have been more radical in the late 1800s when Unity started, but I didn’t think it was news anymore.”

But for such area Protestant seminaries as St. Paul School of Theology (Methodist), Central Baptist Theological Seminary (American Baptist) and Nazarene Theological Seminary, discussions about hell are considerably more nuanced. The denominations these schools represent historically have affirmed hell’s existence, but leaders are quick to point to disagreements among theologians about what exactly that means, about whether hell is permanent and about such alternative ideas as annihilationism, which proposes that when someone who refuses the eternal love God offers dies, God simply wipes out any trace of that person.

For instance, Kris Kvam, professor of theology at St. Paul, says this: “The wonderful thing about St. Paul is you get quite the mix of students. You get people who have grown up with the teaching about hell but it’s so problematic that they want to throw it out. You have others who are fearful and say, ‘This is exactly what I was told would happen in seminary. My core beliefs would be challenged and I would be stripped of them.’ And they may be tenaciously hanging on to them. As a professor, I want to move both of those groups into deeper thought.”

At Central Baptist Seminary, David May, professor of New Testament, says the school doesn’t have a particular class on hell and “few schools do. However, those questions can sometimes come up around the margins, around the edge. There can be semesters go by when students never bring it up or we never go into it.”

May doesn’t believe that “we should totally throw it (hell) out. But can we find a way to articulate it that speaks to what it means to make choices that alienate us from God and one another?”

A similar kind of discussion is happening at Nazarene Seminary and at the Nazarene denominational level.

The Church of the Nazarene has belief statements called “articles of faith.” One says that “the finally impenitent shall suffer eternally in hell.” With help from Andy Johnson, the seminary’s professor of New Testament, those statements are undergoing a revision, and there’s a recommendation that the “eternally in hell” statement move closer to the church’s current “Agreed Statement of Belief,” which says, “The finally impenitent are hopelessly and eternally lost.” That removes the word hell and leaves open the possibility that, in the end, no one will be “finally impenitent.” But it’s unclear whether that proposal will be adopted.

As Nazarene Seminary President Jeren Rowell told me, “There’s so much we don’t know — and can’t. And in the Church of the Nazarene we have really not tried to bind our people with particular views of the beginning or the end of the world.”

As Kvam summarizes this issue, “There is a cry for some kind of punishment or retribution but also for restoration. So I still wrestle with that tension between God’s mercy and God’s justice.”

Perhaps David May summed up this prickly matter best: “Those who don’t know about the afterlife are talking about it. Those who do know about it, they aren’t talking.”

Bill Tammeus, a Presbyterian elder and former award-winning Faith columnist for The Kansas City Star, writes the daily “Faith Matters” blog for The Star’s website and columns for The Presbyterian Outlook and formerly for The National Catholic Reporter. His latest book isThe Value of Doubt: Why Unanswered Questions, Not Unquestioned Answers, Build Faith. Email him at wtammeus@gmail.com.