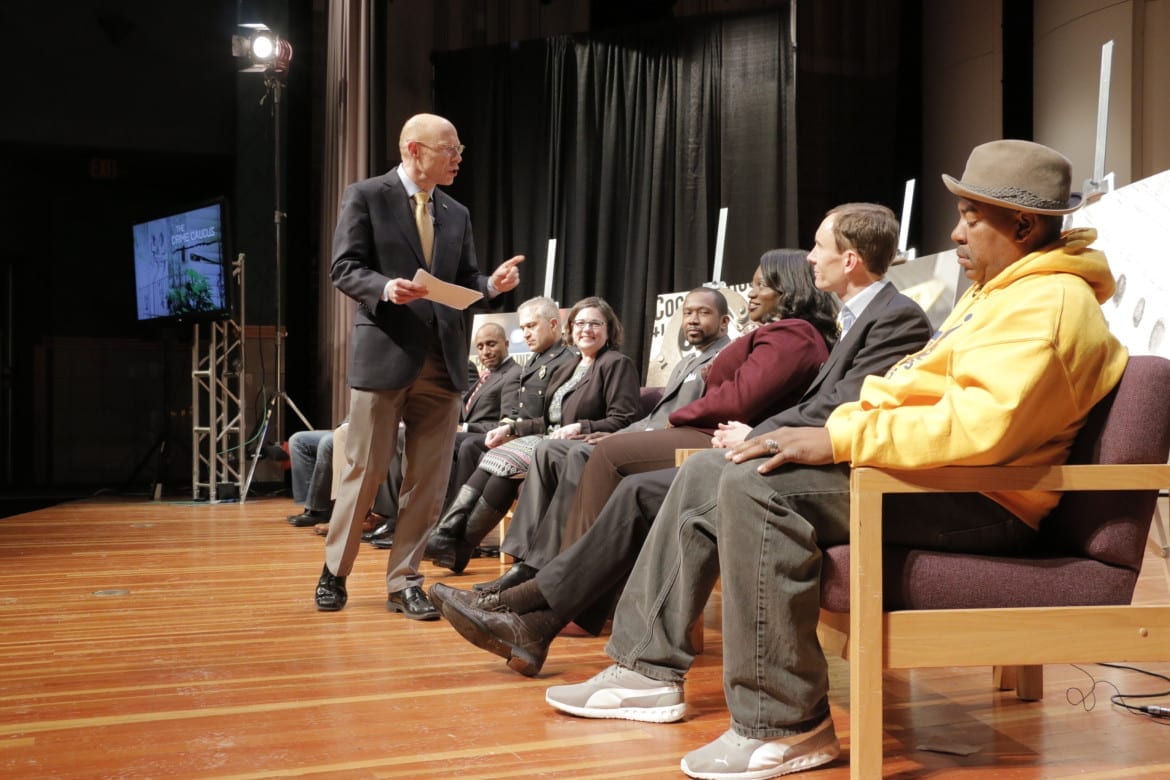 If there was one main takeaway from a Tuesday evening crime caucus in Kansas City, Missouri, it’s that there is no consensus on the best way to stem the tide of violence plaguing the urban core.

Along with audience members, a nine-member panel that included representatives from law enforcement, academia, community organizations, and politics discussed ideas that ranged from more cops on the street to increasing economic opportunity and reducing the prevalence of absentee fathers.

“You have to look at it collectively,” said Kansas City Councilwoman Alissia Canady, who was joined on the panel by her council colleagues Jolie Justus and Quinton Lucas.

The caucus, convened by KCPT in conjunction with its upcoming documentary, “Our Divided City,” came against the backdrop of a spike in the city’s murder rate. Kansas City had 109 homicides last year, a 35 percent increase from the year before.

The event, held at Paseo Academy of Fine and Performing Arts, 4747 Flora Ave., also came as the city is exploring new ways to combat violent crime through its Citizens Task Force on Violence, which held its first meeting last week. Justus chairs the committee, and Canady is a member.

One of the most provocative topics was the idea that bulldozing vacant houses in blighted neighborhoods would be a key step in reducing crime.

Proponents of this approach, including Kansas City Police Chief Darryl Forte, argue that these vacant properties provide safe havens to bad guys along with serving as drug dens and bases for prostitution.

Canady lauded the chief for taking an innovative approach to fighting crime, but Lucas said it did not seem to be the “wisest and most efficient” anti-crime method.

Neighborhood advocate Pat Clarke said he’d choose more police officers over vacant lots. But, he said, “If we put new ones (houses) up, I’m for it.”

Some audience members also redirected the panel to other issues they argued were more pertinent to the problem.

“Crime is more of a behavioral issue than a housing issue,” said Paul Tancredi, president of the Blue Hills Neighborhood Association, which is bounded by 47th and 63rd streets on the north and south, and by Prospect Avenue and The Paseo on the east and west.

Other speakers argued that basics such as good grocery stores could foster more stability in the neighborhoods and that more jobs would deter crime.

Give a young man the option of a good education and a livable wage, argued Forest Tyson, “and I guarantee you he will choose that over violence and crime. But where is the opportunity?”

Canady argued that the city can use its leverage, through its business relationships with local banks and tax incentives provided to developers, to force more home lending on the East Side and to guarantee jobs for locals on construction projects.

But judging from previous efforts, said Maj. Joe McHale, commander of the police department’s East Patrol Division, more law enforcement muscle is not the answer to the crime problem. “Throwing cops at it isn’t the solution.”

Watch the entire event, “THE CRIME CAUCUS: A Citizen led Summit on Crime” at 8pm on Friday, January 29 on KCPT.