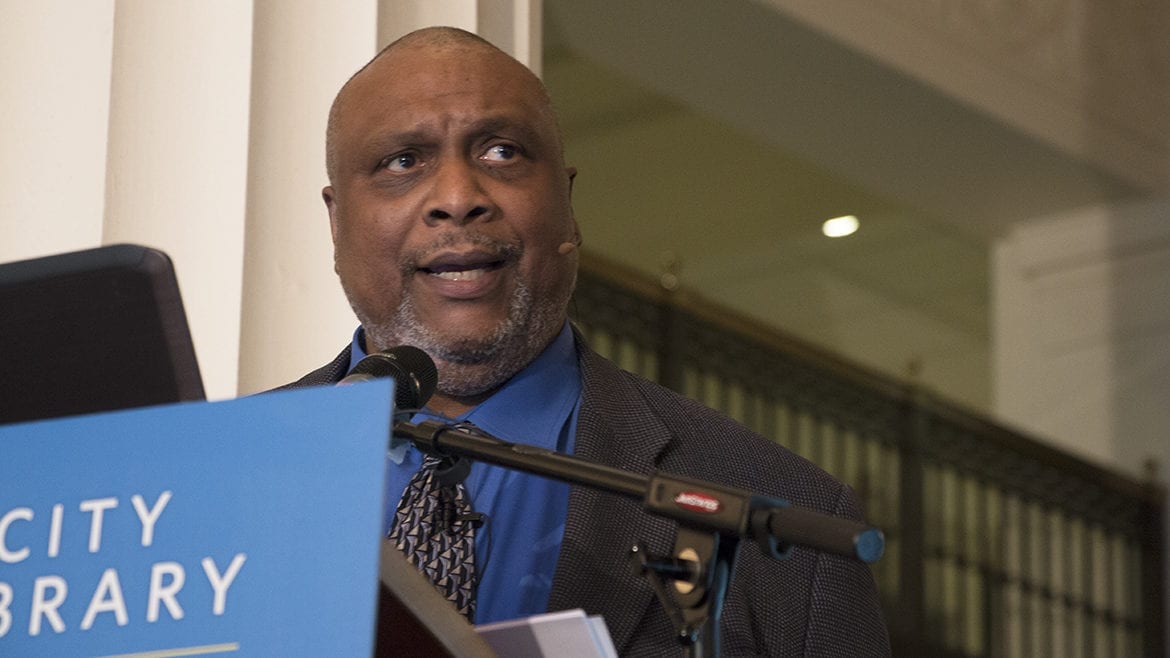 Today, Kansas is known as a deeply conservative state, but a historian reminded a Kansas City audience that the state actually has a long history of racial progressivism dating back even before its statehood.

Meanwhile, he added, he could think of no other place, except for maybe Lawrence, “that is more important to this history than Quindaro.”

The reference to Quindaro, which thrived as a multicultural community in the years leading up to the Civil War, came as Taylor delivered the keynote address for a symposium highlighting the historical significance of the old town. The site is now part of Kansas City, Kansas.

Our Cover Story on Quindaro

Taylor spoke Thursday evening at Kansas City’s Central Library before a crowd of more than 400 people, and he listed Kansas’ status as a beacon of hope for freed slaves during Reconstruction and its early embrace of the civil rights movement as two of many examples of the state’s commitment to black freedom.

The Quindaro symposium is is running today and Saturday at Memorial Hall, 600 N. Seventh St., in Kansas City, Kansas. It is free and open to the public.

The gathering is part of an effort to earn the old Quindaro townsite and its ruins status as a National Historic Landmark through the National Park Service.

The site is already one of roughly 90,000 places on the National Register of Historic places.

But as a landmark, Quindaro would join a more select group recognized as having “exceptional value or quality in illustrating or interpreting the heritage of the United States,” according to the National Park Service website.

Becoming a National Historic Landmark would make Quindaro eligible for funding that is only available for places with that designation, said Jim Ogle, executive director of Freedom’s Frontier National Heritage Area, which organized the symposium.

As a congressionally chartered nonprofit based in Lawrence, Kansas, part of Freedom’s Frontiers mission is preserving the history of the anti-slavery movement eastern Kansas and western Missouri.

Ogle said the Quindaro historic site is important to many different groups, including some early Native American residents and descendants of free blacks who lived in the town. Conflicting visions among the various interested parties have long stymied efforts to preserve and protect the old Quindaro site, he said.

Explore a Timeline and A Reader's Question About Quindaro

The Rise and Fall of a BoomtownThe Kansas-Nebraska Act in 1854 made Kansas territory the center of the conflict over the future of slavery. The act’s “popular sovereignty” provision ditched the long-held Missouri Compromise, which had limited slavery’s reach. Instead, it placed the fate of slavery…

Freedom’s Frontiers stepped in as a neutral partner to help bridge those divides, he said, and in the past couple years, it has gathered oral histories and laid the groundwork for seeking landmark status.

The hope is to submit the landmark application no later than this fall, and the approval process can take a couple years, Ogle said. However, Quindaro supporters are hoping for quicker approval through legislation that Kansas Congressman Kevin Yoder expects to introduce next week.

The symposium is part of the effort to illustrate to the different factions that they can cooperate, and in that respect, Ogle said, the gathering is already a success.

“This is about a community and the people who care about it coming together,” he said. “We live in a divided world right now. Finding examples where people can work together can give us all hope.”