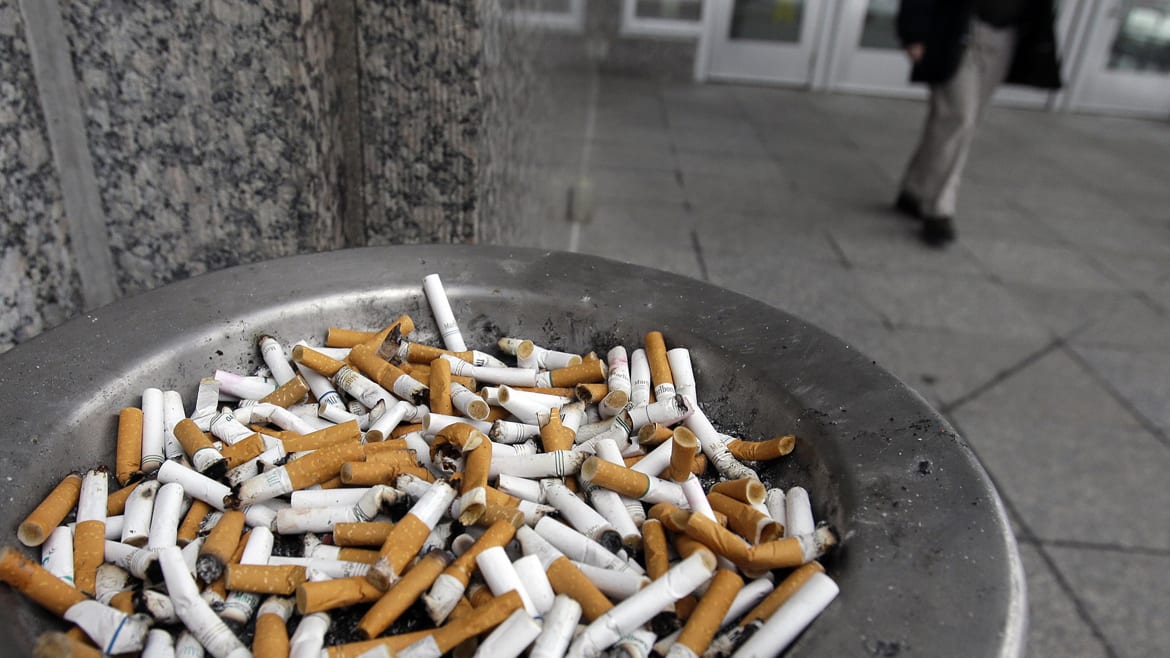 Child advocates in Missouri are pressing for a 50-cent increase in the state's cigarette tax. (AP Photo/Jim Mone)
Share this story

A business-led group based in Kansas City, Mo., is leading an effort to quadruple Missouri’s lowest-in-the-nation cigarette tax and direct the proceeds to early childhood health and education programs.

Organizers of the “Raise Your Hand for Kids” campaign on Friday outlined their plan for a statewide ballot initiative to an audience of about 100 business, education, health and early-childhood leaders at the Greater Kansas City Chamber of Commerce.

The campaign aims to increase Missouri’s cigarette tax from 17 cents to 67 cents a pack.

Campaign leaders estimated the increase would generate $250 million in state proceeds, which they said is about seven times more than Missouri currently spends on early childhood care and education programs.

About a fifth of the tax dollars would return to counties in the Kansas City area, including nearly $31 million to Jackson County.

“This is a huge win for kids,” said Erin Brower, vice president of the Alliance for Childhood Education (ACE), the group spearheading the campaign.

ACE is a coalition of business leaders looking to improve college and workforce readiness among Missouri students. Its board includes executives from a number of Kansas City-area companies, including U.S. Toy Co., Hallmark, and U.S. Engineering.

“Is it going to solve all of our problems? No,” Brower added. “Is it going to give us that seed money to really get these programs going? Yes. We think so.”

ACE hopes to get the cigarette tax increase on the ballot in November 2016. Convenience store owners, who opposed previous, unsuccessful campaigns to increase the tax, have indicated they’re willing to negotiate with campaign leaders.

Under the plan, the state would redistribute the new cigarette tax dollars to counties based on the number of children up to the age of five living in each county. County leaders would then designate the worthiest programs in their area.

Brower said local control was important because of voter mistrust of Jefferson City. But working out how counties will make funding decisions has proven to be one of the thorniest aspects of the plan.

“The more we learn, the harder we know it is going to be,” she said.

Friday’s meeting, designed to get input from local experts, was one of several the campaign has held around the state in recent months.

Leaders hope to wrap up the meetings by February and submit a proposal to state election authorities by May.

Brower said Raise Your Hand for Kids is trying to avoid mistakes that killed proposed tobacco tax increases in 2002, 2006 and 2012.

In general, she said, those efforts failed because voters perceived them as being dominated by urban interests in St. Louis or Kansas City, the laundry list of proposed funding priorities was too hard to digest or the tax increase was seen as too high.

Brower said efforts to keep this campaign simple extended even to discussions about the amount of the proposed tax increase.

“People understand 50 cents – two quarters,” she said. “That is pretty easy to explain.”

Previous efforts to raise the tax ran into opposition from the Missouri Petroleum Marketers and Convenience Store Association.

The association’s executive director, Ron Leone, said in a phone interview that his organization had never rejected a cigarette-tax increase out of hand. He said the association had always said it could support a reasonable increase.

Leone said, however, that he considered a 50-cent increase unreasonable because it erases Missouri’s advantage of having a lower cigarette tax than neighboring states.

He said the two sides might be able to craft a compromise if, for example, the tax-hike campaign lowered the increase as part of a deal that included an excise tax on so-called e-cigarettes, which are growing in popularity.

“We are always open to taking control of our own fates in supporting a tax increase we can all live with,” Leone said.

He said the association would also like assurances that there won’t be additional petition initiatives after the November 2016 election to raise the tax even more.

Some of the comments from the speakers and audience stressed that the tax increase was an investment in a future workforce and a pro-economic-development measure.

Stephen Green, superintendent of Kansas City Public Schools, urged campaigners to focus on the moral and ethical aspects of providing services to children. He also said they should ensure that only high-quality programs receive the tax dollars.

Missouri and Kansas typically rate in the bottom half of surveys of states’ tobacco prevention and cessation programs.

In the 2014 America’s Health Rankings, an annual survey by the United Health Foundation, Missouri ranked 41st in the nation with an adult smoking rate of 22.1 percent. Kansas ranked 31st at 20 percent. The national average is 19 percent.

Brower said research shows that a 250 percent increase in the cigarette tax is a key price point in deterring children from taking up smoking.

Anti-smoking advocates in Kansas have launched their own anti-smoking campaign through a coalition called Kansans for a Healthy Future. Partners include the Kansas Health Foundation and the American Heart Association.

The coalition is not actively seeking an increase in the Kansas cigarette tax. Rather, it’s stressing to lawmakers that pricing strategies are an effective deterrent to smoking, along with clean-indoor-air ordinances and tobacco-prevention programs, said Tracy Russell, tobacco prevention manager with the Kansas chapter of the American Heart Association.

Russell said that polling done last year by the American Cancer Society found that 70 percent of Kansans supported a $1.50 increase to the state cigarette tax.

According to a coalition fact sheet, such an increase would generate an additional $87.5 million in annual cigarette tax receipts.

Russell also noted that the state last raised its cigarette tax in two stages in 2002 and 2003.

“It certainly begs the question of whether it is time to revisit that,” she said.

According to the coalition, youth smoking rates in Kansas dropped from 26 percent to 21 percent after the last increase.

Mike Sherry is a health reporter with Heartland Health Monitor, a reporting collaboration among KCUR Public Radio, KCPT Public Television, KHI News Service and Kansas Public Radio. He is based at KCPT’s Hale Center for Journalism.