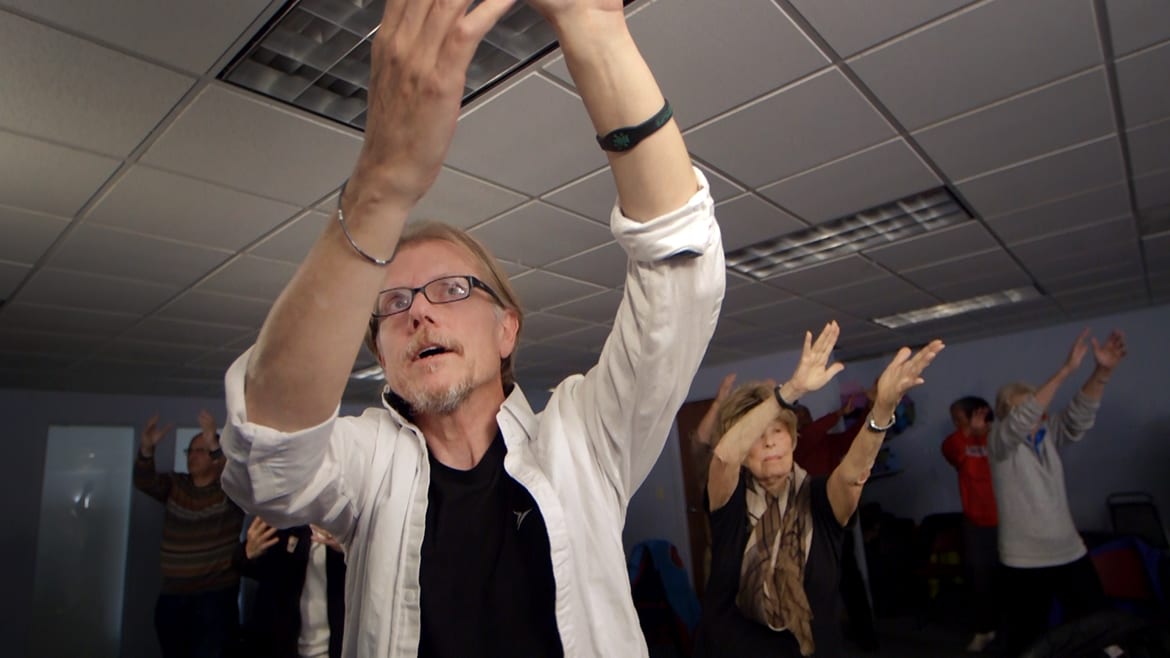 The room is dark. Most participants are not wearing shoes, and their eyes are closed. Clad mostly in sweatpants and seated in chairs, they settle in for a 45-minute guided meditation from their instructor.

This is how Bill Douglas begins his classes at Turning Point: The Center for Hope and Healing in Leawood, Kansas. The center has been open since 2001 and is a program of The University of Kansas Hospital.

“There’s no greater sense of surrender than the release of a full breath,” Douglas said.

The dozen or so students breathe in, then out, visibly relaxing in their chairs and, in some cases, seeming to fall asleep.

Call it complementary, alternative or just plain medicine — for the students, or you could call them patients, the goal of the class is to help manage serious or chronic illnesses.

The students, many of whom have been referred by a physician, attend the classes for free.

“Anybody dealing with a chronic health issue, they can contact Turning Point and see if they are in a position to qualify,” Douglas said.

“After three or four months of doing T’ai Chi, I was no longer in pain,” Ott said.

An appointment for the other hip, scheduled for replacement due to what her doctor described as a ‘bone on bone’ condition, was cancelled.

“I’ve noticed a difference in my mobility and in my flexibility,” Ott said. “It’s just been like a miracle for me, sincerely.”

Douglas cautions that students only get out of T’ai Chi and QiGong meditation what they put into it.

“It’s going to vary from person to person, and it’s also going to depend on how much people apply themselves to what we teach in the classes,” Douglas said.

Bill Douglas and his wife, Angela Wong Douglas, are the authors of “The Complete Idiot’s Guide to T’ai Chi & QiGong Illustrated,” now in its fourth edition. They are the founders of World T’ai Chi Day, which started in Kansas City, Missouri, on the lawn of the Nelson Atkins Museum of Art in 1998 and is now an annual event. Their goal that first year was to get the word out about T’ai Chi.

“We came up with this idea, and we thought, why don’t we create a public spectacle that will be so visually engaging, that it’ll be a media event? So we decided to try and get every T’ai Chi practitioner in the Kansas City Metro Area together on the south lawn of the Nelson Atkins Museum,” Douglas said.

More than 200 people showed up and so did the media. Now, the day is observed in more than 80 countries, according Douglas.

Some of those practicing T’ai Chi in Douglas’s class say they are are experiencing some of the benefits that have been touted in research published in the last few years by Harvard Medical School.

Al Hussar said he practices T’ai Chi nearly every day and has for a couple of years. It’s helped his stress level and his balance, he said.

Hussar said he’s been able to stop taking some of the medications he was taking for Type 2 diabetes.

“I don’t know why it works, but keep doing it,” his doctor told him.

Douglas encourages his students to work with their doctors.

Bill Lowenstein credits the class with helping him lower his doses of his heart medication.

“If they could put a money value on what is being done here, it would be like a pill that is worth millions and millions of dollars,” he said.

Women have always been farmers, now they’re being counted

Tags: The Hale Center for Journalism