From the NewsHour: The Legacy of Head Start 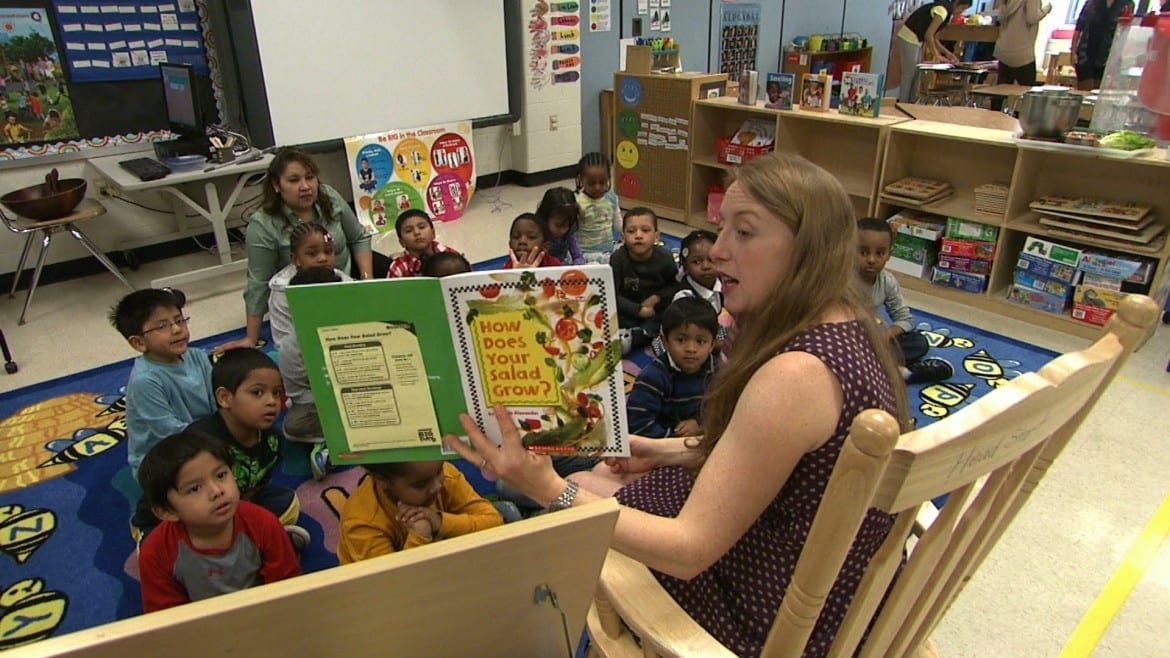 In its latest American Graduate report, the NewsHour’s April Brown produced this story abut how the program has impacted the lives of millions of children.

The reporting is part of a public media initiative funded by the Corporation for Public Broadcasting.

Below is an excerpt from the transcript for that program. Also check out this story about a Kansas City Head Start program, by KCPT/Flatland’s Lindsey Foat.

APRIL BROWN: In Lisette Steinwald’s preschool class in Silver Spring, Maryland, the theme of what it takes to make a salad can be found in a variety of activities throughout the day, from reading, to a little show and tell.

The 4- and 5-year-olds she teaches in the Head Start program at Montgomery Knolls Elementary School spend about three-and-a-half-hours with her every day during the school year.

STUDENTS (singing): Curve it around and slide to the right to make a number two.

APRIL BROWN: They’re learning skills designed to ease the transition to kindergarten, and are following in the footsteps of more than 30 million children who have gone through the program in the United States over the past five decades.

APRIL BROWN: Head Start got its start in the summer of 1965, as one salvo in President Lyndon Johnson’s war on poverty. The early education program for low-income children supported their social, emotional and physical needs and got them ready for elementary school. It drew high-profile supporters, including the president’s wife, Lady Bird Johnson, and actor Gregory Peck.

GREGORY PECK: Sadly, there are little children who are already headed for lives of frustration and misery. No one ever read them a story, taught them a nursery rhyme, showed them about colors, letters and numbers. When they start school in the first grade, they will be so far behind the others, that they may never catch up.

DARREN WALKER, President, Ford Foundation: In 1965, I was sitting on the porch of our little shotgun shack in Ames, Texas, with my mother and a woman approached the house. She introduced herself and told my mother that she was representing a new program called Head Start.

APRIL BROWN: Darren Walker’s mother signed him up in the program’s inaugural year, and he recently shared his story at a gathering of supporters and alumni from around the country hosted by the National Head Start Association.

DARREN WALKER: Head Start changed my life. It allowed me to begin to imagine, to think about the world outside of my environment and to think creatively about what my life might be.

APRIL BROWN: Today, Walker is president of the Ford Foundation, the nation’s second largest private philanthropic group, which is a funder of the NewsHour.

In honor of Head Start’s 50th anniversary, the organization is paying for new research on early brain development in an effort to improve outcomes. Walker says the foundation has come full circle since it supported research in the 1960s that led to the creation of Head Start in the first place.

DARREN WALKER: What we were interested in at Ford was how we could, at scale across America, have a program that would create an educational revolution, that would build a new social mobility escalator.

WOMAN: Isabel, do you have a toothbrush at home? No toothbrush.

RUSS WHITEHURST, Senior Fellow, Brookings Institution: The evidence is that it did some good when it was first introduced in the very poor counties in the South. It’s a different day.

APRIL BROWN: Russ Whitehurst is a senior fellow at the Brookings Institution and has studied preschool programs extensively. He says, even though it’s an iconic program, evidence has revealed that Head Start’s long-term outcomes are questionable. Whitehurst points to a 2010 study by the U.S. Department of Health and Human Services, and the 2014 follow-up report, which found almost no evidence of lasting impacts for Head Start children beyond the third grade.

APRIL BROWN: But the executive director of the National Head Start Association, Yasmina Vinci, says other factors should be taken into consideration when looking at that research.

YASMINA VINCI, Executive Director, National Head Start Association: Even when you’re vaccinated, vaccinations do not last forever. You have to have a booster. And when our children don’t go to schools that are well-funded and well-run and schools that are ready for them, they certainly do lose some of their advantage.

APRIL BROWN: However, even the White House has acknowledged Head Start programs haven’t always been pushed to do their best.

PRESIDENT BARACK OBAMA: If a program wasn’t providing kids with quality services, there was no incentive to improve. Under the new rule, programs are going to be regularly evaluated against a set of clear, high standards.

Still, Russ Whitehurst says the program isn’t meeting the needs of many low-income families. He believes they would better served with vouchers to choose their own preschools, especially since many Head Start centers are open just a few hours a day.

Numbers proving Head Start’s success are hard to come by, but the program’s supporters say they know it’s changed many lives.

YASMINA VINCI: We see the children who are now graduating from high school and getting scholarships, staying in school, not dropping out of high school.

DARREN WALKER: I remember that I started to learn to read and that I would read to my mother when I came home, and she was so proud of me. And it was one those moments that I learned that, when I did well in school, my mother would be proud of me.

APRIL BROWN: Back in Maryland, Lisette Steinwald’s class continues their exploration of salad, taste-testing a variety of ingredients.

LISETTE STEINWALD: Raise your hand if you like lettuce more than carrots, because we’re going to count. All right, one, two, three-and-a-half.

APRIL BROWN: And at the end of the day, Zyriana Barazarte is happy to share all the things she learned in her morning at Head Start.

ZYRIANA BARAZARTE: I learned how to make salad, how to read, and how to sing songs.

APRIL BROWN: Zyriana’s mother, Zoila Barazarte, who is deaf, says the program has been good for her daughter.

APRIL BROWN: Just a few of the outcomes Head Start was originally created to nurture.

PBS NewsHour education coverage is part of American Graduate: Let’s Make it Happen, a public media initiative made possible by the Corporation for Public Broadcasting.