Missouri’s Eviction Crisis Could Be a ‘Humanitarian Tragedy,’ Advocates Say

Federal eviction moratorium ended Saturday, and distribution of rental assistance has been slow

Above image credit: The St. Louis Housing Defense Collective held a rally downtown on Aug. 2, 2021, demanding that housing assistance get into the hands of those facing evictions. (Contributed)
Sponsor Message Become a Flatland sponsor

Melissa Pashia is hoping for any kind of good news today.

The federal eviction moratorium ended Saturday, and she’s got her fingers crossed one of her clients will finally get approved for the rental assistance that they applied for in April through the State Assistance for Housing Relief Program (SAFHR).

The aid approval would come just before their first eviction hearing on Wednesday — but way past the day they lost hope.

“It is hard when people have been waiting for months and months,” said Pashia, a housing resource specialist for Metropolitan St. Louis Equal Housing and Opportunity Council (EHOC). “That takes a mental toll on people to have it hanging over them and that they could lose their housing.”

It’s a middle-age couple living in an affluent part of West St. Louis County, who saw a big decline in their incomes and have had trouble keeping up with their bills ever since. They’ve done “backflips” to get together all the information required by the state’s SAHFR program, Pashia said, but are still waiting.

And their case isn’t unique.

Housing advocates say a frustratingly large number of people are still waiting to hear back from their state or local government on rental assistance. The state received $320 million in housing relief funds to assist people impacted by the pandemic, and another $270 million is on the way.

So far, 6,000 families have been awarded about $30 million in assistance. However, since March 15, 2020, more than 28,000 evictions have been filed in Missouri — and anywhere from 150,000 to 230,000 Missourians are at risk for eviction, according to Missouri Housing Development Commission Director Kip Stetzler.

The efforts at the local government level have also been slow, advocates say.

The eviction crisis is about to create a new “subculture” of homelessness, said Clarice Lipsey, a part of EHOC’s eviction defense department.

“It’s the people that were able to maintain and were middle class, but COVID hit and they can’t bounce back,” Lipsey said. “That’s going to be a new homeless.”

The end of the federal moratorium comes as the state faces a sharp incline of COVID-19 cases, as the contagious Delta variant spreads rapidly across the state. And it comes as school districts struggle to get students back in classrooms. One of Pashia’s clients who has been waiting for housing assistance since April is a family of seven.

“It’s heartbreaking,” Pashia said. “These are people who have multiple jobs and are just as busy as the rest of us struggling to get by. And all they are asking for is time to get this money.”

Some State Courts Step In

The state is about to have a “humanitarian tragedy,” unless judges, advocates and municipality leaders all come together to solve this problem, said Gina Chiala, executive director at the Heartland Center for Jobs and Freedom in Kansas City.

Chiala is part of a task force of attorneys and community leaders that sent a letter last week to the Missouri Supreme Court Chief Justice Paul Wilson and the presiding judges in Kansas City and St. Louis areas seeking solutions to the looming eviction crisis.

“The crisis is avoidable, and the solutions involve win-win outcomes for tenants and landlords alike,” the letter states. “But these solutions will be untenable without collaboration with the judiciary.”

In other words, the court needs to step in to divert evictions, just as judges across the country have already done.

In Philadelphia, the court issued an administrative order requiring landlords to apply for rental relief 45 days prior to filing an eviction case.

Chief Magistrate Judge Brendan Murphy of Cobb County Georgia has crafted a diversion program that works in tandem with emergency rental relief providers and keeps evictions off of tenants’ records.

In Davidson County, Tennessee, a judge instituted a mediation program that embeds the rental relief process into court procedures, “and she has enthusiastically offered to share information with other jurisdictions,” the letter states.

Going even further, cities such as Milwaukee, Wisconsin, and Louisville, Kentucky., are enacting right-to-counsel to mandate that tenants have access to attorneys.

The task force pointed to recent studies that show less than 6% percent of landlords and 11% of tenants have applied for the assistance that would keep families housed and landlords paid.

U.S. Associate Attorney General Vanita Gupta has also urged state courts to enact “eviction diversion strategies” because women and people of color will disproportionately be impacted by the eviction crisis.

Chiala believes that judges themselves want to help get that rental assistance in the hands of people to prevent evictions.

“The judges that I know don’t enjoy evicting people,” Chiala said. “Having this kind of process in place is good for them because it gives them a work experience that is much more humane than evicting scores of people during a pandemic.”

No Sense of Urgency

Greene County has been one of the few areas in the state that has been able to get the federal rental assistance out quickly by using an in-person, case manager system to process applications.

The county has dispersed more than 3,000 awards totaling $3.1 million in Greene County, which is almost 40% of the federal funds they’ve received.

“We are hopeful that the judges will allow for transitions, if not fully supporting the Emergency Rental Assistance Program,” Scott said.

It takes less than two weeks for families in Greene County to receive funds once they’ve been approved, Scott said. By contrast, it takes an average of 63 days in St. Louis County, according to its dashboard, which Pashia said has been problematic for her clients.

The delays and requests for sometimes unnecessary information makes it hard to keep landlords on board, Pashia said.

“The landlords are getting sick of it,” she said. “They don’t even want to participate anymore.”

Yusef Scoggin, director of the Office of Family & Community Services in St. Louis County, said they have been reviewing their processes frequently and trying to fix the problems. They are now distributing $1 million a week and are partnering with certain St. Louis County Library locations to provide one-on-one case management assistance to those who are struggling with the application process.

The state has been able to disburse $3 million a week or more in July, according to the SAHFR dashboard. They are also partnering with 13 service providers to help people fill out the applications.

However, Pashia said she has three clients who applied to the SAHFR program this spring, and none of them have reached the approval phase — despite putting in a lot of work.

It stems from a glitch in the process, she said. Every time the state says it needs new information to complete the application, that application goes back to the end of the line.

For example, Pashia said the state has asked her clients’ landlords to submit the most recent payment ledgers. But because it has been taking so long to process the applications, the state’s processors keep asking for updated ledgers.

But every time they do, the person’s application goes back to the end of the line for review.

She learned this from staff members at the SAHFR program themselves, who said they would expedite her cases after she called and inquired.

Kennard Williams, a lead organizer with Action St. Louis, has knocked on almost 2,000 doors of St. Louis city residents who are on the eviction dockets or have eviction judgements against them. The goal was to inform them about the rental assistance and about their rights under the federal moratorium.

However, Williams said he’s been having a hard time getting rental assistance for city residents.

In fact, Williams is among a group of advocates who held a rally across from City Hall on Monday afternoon, demanding that the city’s department of human services end its delay and backlog of rental assistance applications. They also want the city to stop forcing tenants to “jump through bureaucratic hoops” to access the much needed funds.

The rally ended with protestors voicing their demands via megaphone in the mayor’s office lobby, though the demands also extend to the courts and Board of Aldermen.

“Members of our administration sat with them and listened to their demands and will provide responses to the demands soon,” the mayor’s spokesman told the Independent.

On Monday, the city began providing direct payment to tenants for housing assistance — which was one of the group’s demands — and using local funds to expedite applications, according to a statement by St. Louis Mayor Tishaura Jones. There are more than 3,000 eviction cases that are pending on the docket, she said.

“We’ve been repeatedly asking why this money is not getting out,” Williams said. “There’s no sense of urgency to do this, and now the clock has run out.” 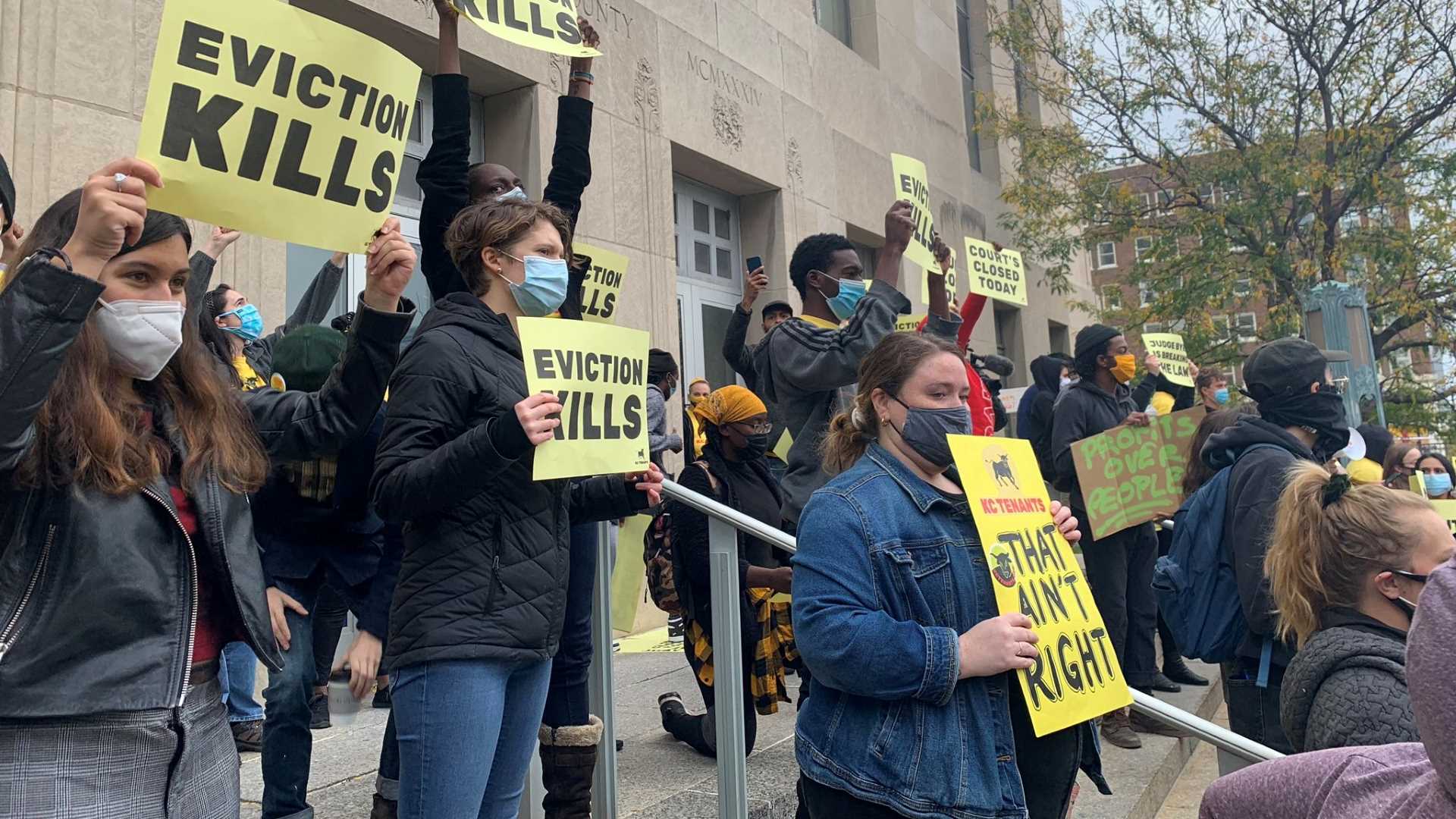 Can Missouri Get Out Rental Assistance Fast Enough to Prevent Evictions? Missouri has hundreds of millions of dollars in rental assistance available. But it’s unclear whether it can dispense those funds fast enough to help Missourians avoid evictions. 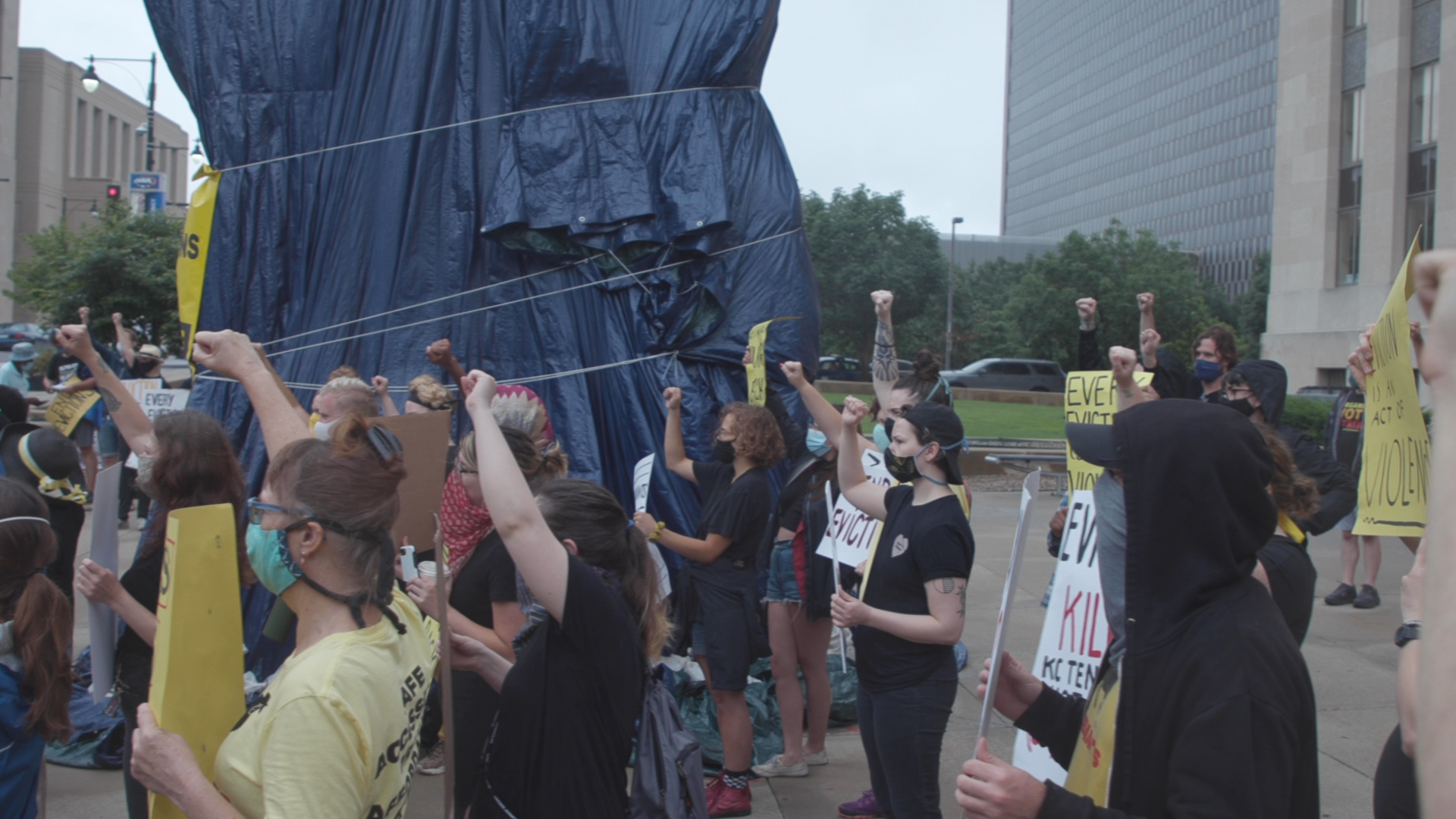 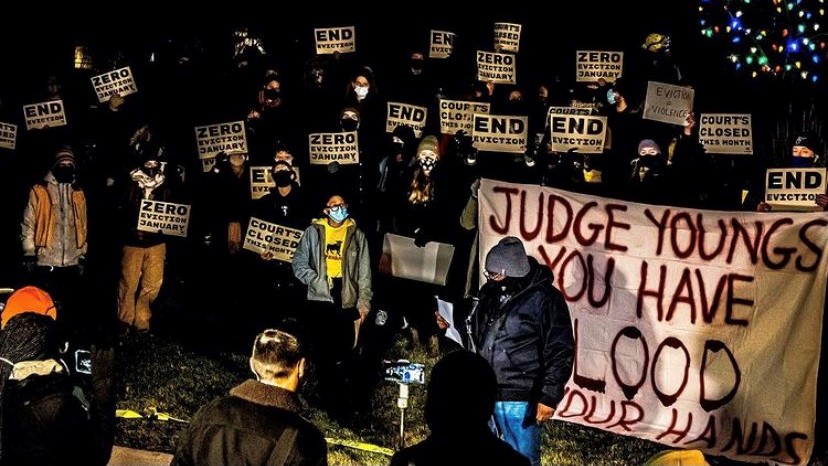 Missouri Housing Advocates Look to Biden Administration to Strengthen Eviction Moratorium Housing advocates are looking for help from the Biden administration to close loopholes in the federal eviction ban.

Missourians Fight to Keep Homes as End of Eviction Moratorium Looms Housing advocates are bracing for a spike in evictions as federal moratoriums sunset at the end of the year. 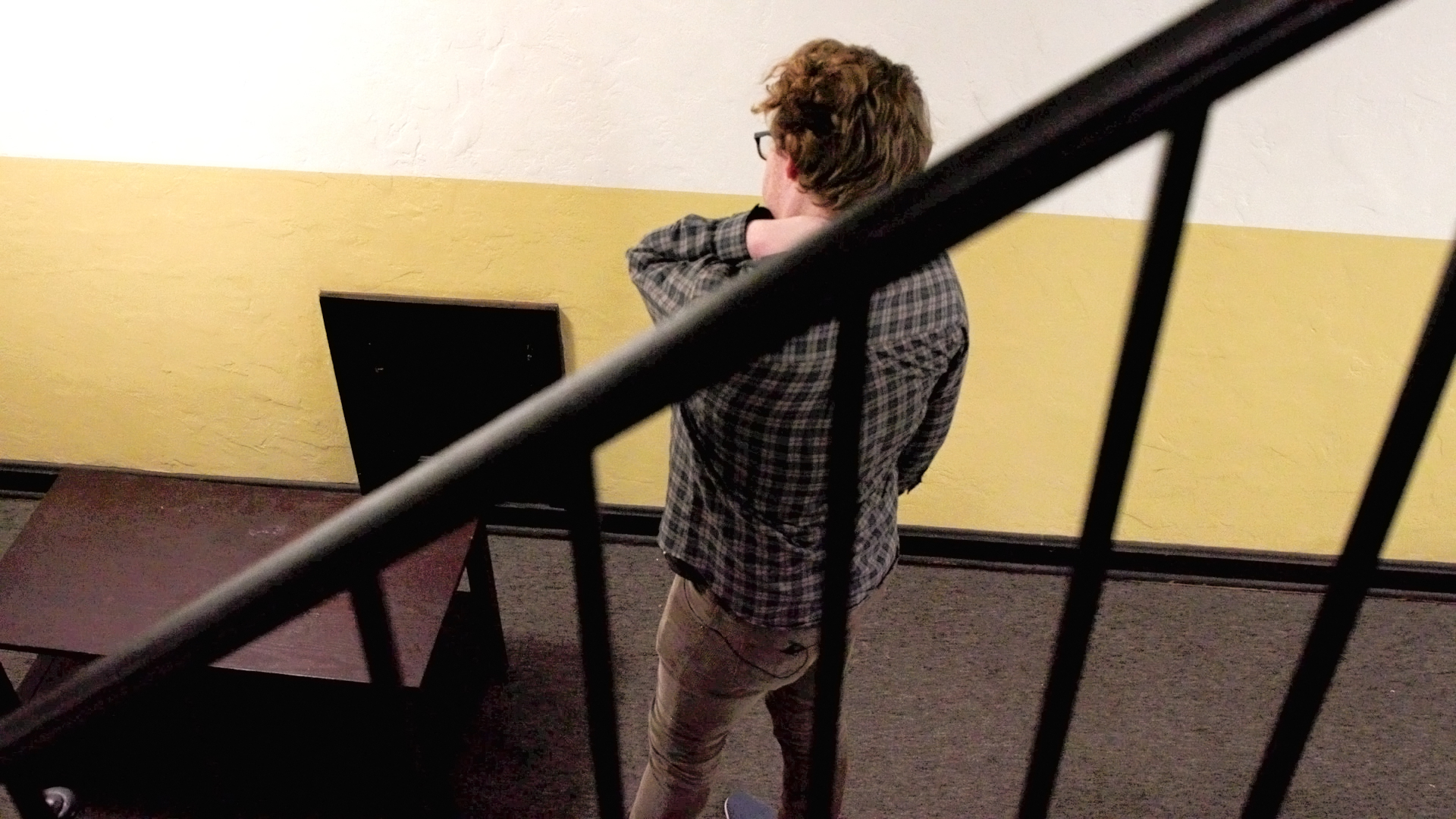 A Place to Sleep: Tenants Seek Homes After Being Displaced After being evicted, here’s what it’s like to find a new place.