Leadership Is An Activity, Not A Position

A Gathering Spot for Action

Browse the list of summer youth camps at the Jewish Community Center of Greater Kansas City and parents are bound to find something to suit just about any childhood personality.

There are classic youth activities for softball players, theater performances for emerging actors and trendy Lego camps for the STEM-obsessed.

The Jewish Community Center, situated in Overland Park near Sprint’s world headquarters, tweaks offerings to keep modern campers engaged. But one thing it hasn’t changed after decades of hosting camps is an underlying focus on good deeds and giving back to the community. The camp guide makes it clear: Values are part of the lesson. 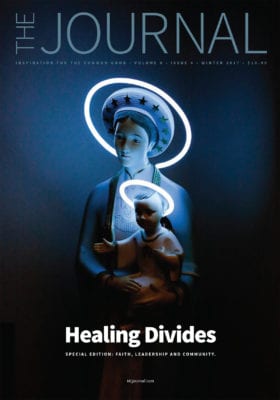 This is the fourth installment of a six-part series that will run on Flatland Thursdays through March 9. The stories are reprinted with the permission of the Wichita-based Kansas Leadership Center, which published them in the January “Healing Divides” issue of The Journal, its quarterly magazine. KLC is a nonpartisan education nonprofit that works to foster stronger leadership in communities throughout the state.

By middle school, one special camp puts community service front and center. Ma’Asim Tovin camp, which means “good works” in Hebrew, allows campers to volunteer in the community every morning and participate in recreational programs in the afternoon.

The work of Maidhof, a 2014 alumna of the Kansas Leadership Center, and the Jewish Community Center embody the Kansas Leadership Center principle that “leadership is an activity, not a position.” By inspiring and empowering those who walk through the doors to take action, the center works to make a sizable positive impact in a Kansas City region where Jews number about 19,000, or just more than 1 percent of the population, according to the online Jewish Virtual Library.

Younger campers help out by conducting drives, be it for toilet paper, food or school supplies. It’s important, Maidhof says, that children learn the importance of giving back for the greater good.

“The Jewish Community Center has been in Kansas City for over 100 years,” Maidhof says. “Throughout those years we’ve taken very seriously the (words) ‘Jewish,’ the ‘community’ and the ‘center’ as a place of gathering.”

At the beginning of the 20th century, Jewish immigrants came to the center to study English and learn American customs. It was a safe place to learn while their children were cared for.

“They were not burdens on society. We did our best to help them become contributing members in America as comfortably, happily and quickly as possible,” Maidhof says.

These days the center offers a helping hand to all refugees as it seeks to build understanding and compassion across faiths.

The civic commitment is an intrinsic part of being Jewish, Maidhof says.

Inside her office on a recent sunny day, Maidhof proudly wears a T-shirt with the Hebrew words “love your neighbor as yourself.”

The community center is open to all. About half the members are not Jewish. The center houses a state-of-the-art workout facility, swimming pool, day care, art and cultural programs, and more.

“That diversity only enriches us,” she says. “It broadens our thinking.”

Sometimes it means the center sends members into the community to serve others. Other times the center hosts programs and invites the public to use its facility. It is home to several collaborative performances.

For the past several years, the center has partnered with Johnson County’s Theatre in the Park on a production. This year audiences could see “Mary Poppins” at the air-conditioned community center theater. Or they could watch the same performance outside at the Theatre in the Park, which is organized by the county. It was the same production with the same actors, but by varying the venue it allowed different audiences to see the production.

“By doing that, we just use community resources more effectively,” Maidhof says.

The center has also become an established place for the public to hear about social justice issues, be it through theater performances, art gallery openings or ecumenical services.

“We use our various venues to forward a social justice agenda,” Maidhof says.

The work is far from easy. The doors remain open to the public even after a white supremacist targeted the center in 2014 and killed two people in the parking lot. The victims were on their way to a regional youth singing contest. A third person was killed in a nearby Jewish retirement community.

The tragedy strengthened the community center’s resolve and commitment. It promotes and helps host events for SevenDays, an effort to promote peace and understanding that was initiated after the shootings.

The center also built a memorial on campus with unsolicited donations received after the shooting. A youth group from Georgia on a cross-country trip recently stopped by to sing at the memorial.

“We want this to become a destination,” Maidhof says, “and a place of comfort and inspiration for people.”

A Year-Round Charity for the Jewish Community in KC

Finding Sisterhood in a Season of Giving