Comments Come During Forum at University of Kansas Medical Center 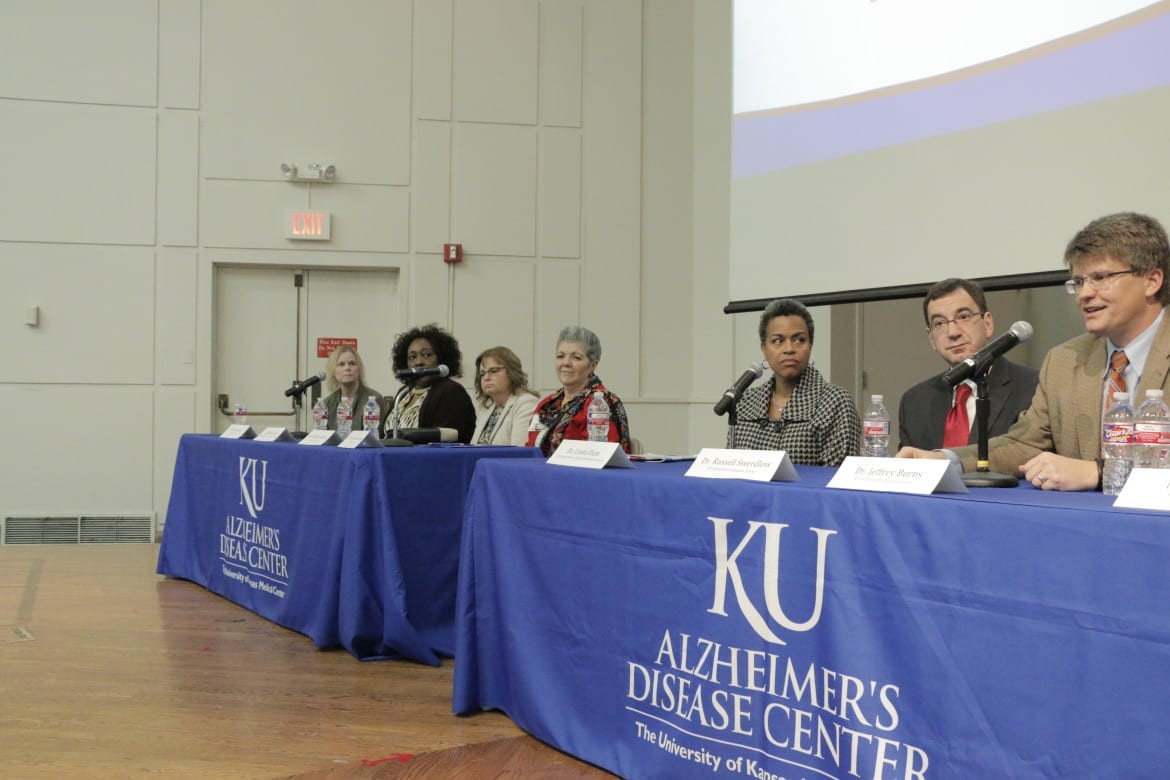 Dr. Jeffrey Burns, far right, spoke about work at the University of Kansas Alzheimer's Disease Center at a public forum on the KU Med campus Monday. Other panelists included representatives of community organizations. Seated with Burns were Dr. Russell Swerdlow, director of the Alzheimer's center, and Linda Elam, a deputy assistant secretary with the U.S. Department of Health and Human Services. (Photo: Mike Sherry | Flatland)
Share this story

Two University of Kansas Medical Center researchers at the forefront of national efforts to treat Alzheimer’s disease said scientists are making strides toward reducing the prevalence of a condition that affects as many as 5.1 million Americans.

Key aims include early detection and halting the progression of the disease, said Dr. Jeffrey Burns, a leader of the KU Alzheimer’s Disease Center (KUADC).

“We think that day is coming,” said Burns, who spoke at a public forum on the KU Med campus Monday in Kansas City, Kansas. The KUADC co-sponsored the event with the U.S. Department of Health and Human Services (HHS).

The KU Alzheimer’s Disease Center is one of 29 federally designated centers, through the National Institute on Aging.

Burns and Dr. Russell Swerdlow, the director of the center, outlined some of the research at the center, which includes studies on how exercise can prevent or delay the onset of Alzheimer’s.

Some data suggest 75 minutes of moderate aerobic exercise a week can have a positive effect, Burns said.

Alzheimer’s researchers, he said, now have a diagnostic method in which a dye injected into the body can highlight the buildup in the brain of a protein linked to Alzheimer’s before any outward symptoms appear.

Swerdlow is researching the link between brain energy metabolism and Alzheimer’s. He’s also experimenting with stem cells in animal models to stimulate growth of brain cells.

The forum also featured a number of other panelists, including representatives from local service and advocacy organizations.

Other panelists suggested the need for greater focus on people with developmental disabilities and the need for innovative ways to assist people with Alzheimer’s disease and their families – such as establishing day programs for people not yet suffering from advanced forms of the disease.

Linda Elam, a deputy assistant secretary with HHS, said the U.S. health care bill for Alzheimer’s and related dementias is about $109 billion a year. In addition, she said, family caregivers collectively miss out on about $50 billion in wages because of their responsibilities.

“Even given that dismal background, we have reason to hope,” she said.

The goal is to find a way to prevent and effectively treat Alzheimer’s by 2025.