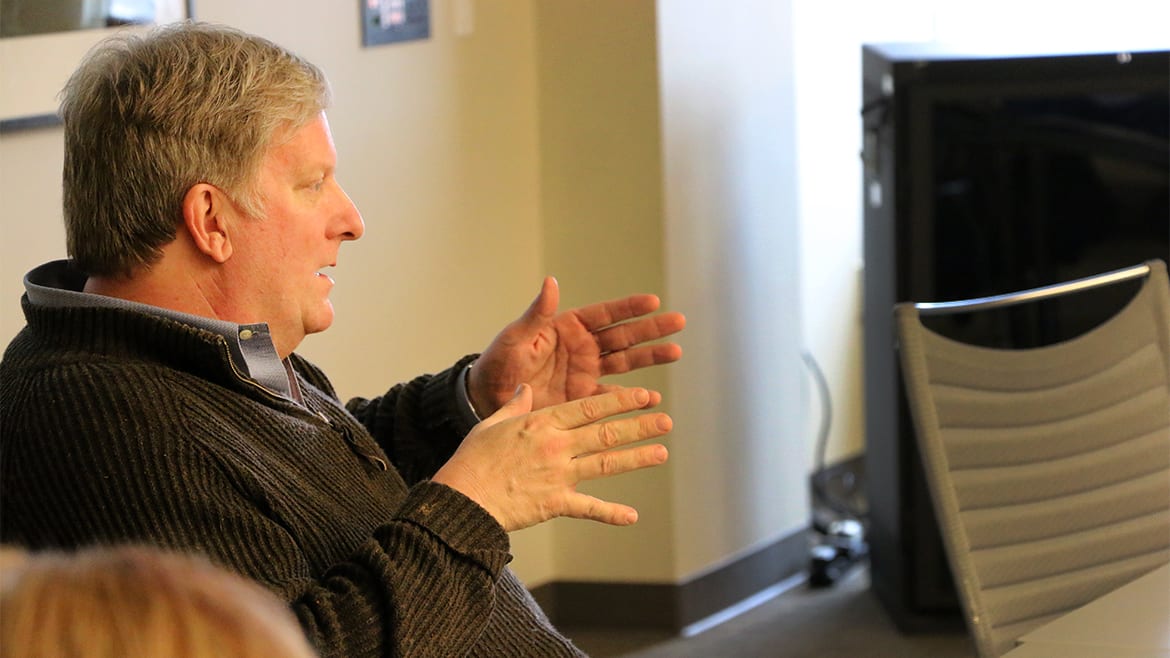 Scott Lakin, shown here facilitating a meeting this month, will not continue as director of a regional health initiative due to changing funding priorities of supporting foundations. (Photo by Mike Sherry/Hale Center for Journalism)
Share this story

During the past eight years, the philanthropic community has spent about $8 million on a wide-ranging program aimed at improving health services for low-income individuals in the Kansas City area.

The REACH Healthcare Foundation and the Health Care Foundation of Greater Kansas City (HCF) have provided nearly three quarters of the total funding. But now, the collaboration and the various efforts it has spawned are taking on a more targeted approach heading into 2015.

“We are really looking at this as an opportunity to let those projects and ideas take shape on their own,” said HCF’s chief executive, Dr. Bridget McCandless. “We welcome them to come back to us to kind of do Chapter 2 of this work.”

The upshot, according to officials with both organizations, is that the foundations will entertain funding requests for specific projects through the program and direct dollars to particular areas of interest. Those include efforts to secure subsidized health coverage for area residents under the Affordable Care Act.

The Mid-America Regional Council (MARC) administers the program, which has a variety of committees operating under an umbrella known as the Regional Health Care Initiative.

For MARC, the revamped funding structure means it will enter the New Year without enough funds to retain the program director, Scott Lakin, or to fill a vacant health planner position.

Besides the Safety Net Collaborative, a body that brings together top executives of the various providers, work groups cover topics that include oral and behavioral health.

The program also includes a project that helps safety-net clinics connect their electronic medical records systems to computer networks. Known as health information exchanges (HIE), they allow for the safe and secure sharing of patient data.

REACH is particularly interested in continuing to fund that project as well as work through the mental health group, said REACH spokeswoman Pattie Mansur. She also said REACH has earmarked $45,000 next year to update a regional health data report.

“We are not walking away from MARC or from regional health improvement,” Mansur said.

According to figures provided by HCF, the two regional health foundations have spent $2.4 million combined since 2006 on core operating expenses for the regional health initiative. The money covered administrative expenses and other support for the committees, including paying for conferences and forums put on by the groups.

The foundations have also spent about $2.9 million to help safety-net clinics provide evening and weekend hours for patients.

At MARC, the regional health initiative falls under the organization’s Community Development division, which is headed by Marlene Nagel.

MARC was not surprised by the foundations’ change in funding strategy, she said.

The change in focus accords with an evaluation of the health care commission that the two foundations released earlier this year.

“We have been working toward this for a while and recognized that we needed to be more project-focused in our work,” Nagel said. “Not only is a lot of work underway, but the community has benefited from the work that has been accomplished.”

She said MARC is working to identify areas where it can incorporate portions of the regional health initiative into other parts of the organization, such as work involving homelessness and early childhood education.

The co-chair of the mental health stakeholders group, Susan Crain Lewis, said the prospect of less administrative support from MARC will have definite repercussions.

“Can we still function? Can we still do good stuff? Yes,” said Lewis, who is CEO of Mental Health America of the Heartland in Kansas City, Kan. “Will it be harder? Will it take longer? Probably.”

On the positive side, Lewis said, the foundations’ change in funding strategy has caused the group to narrow its focus to high-priority areas, including helping to establish a mental health crisis-stabilization center in Kansas City, Mo.