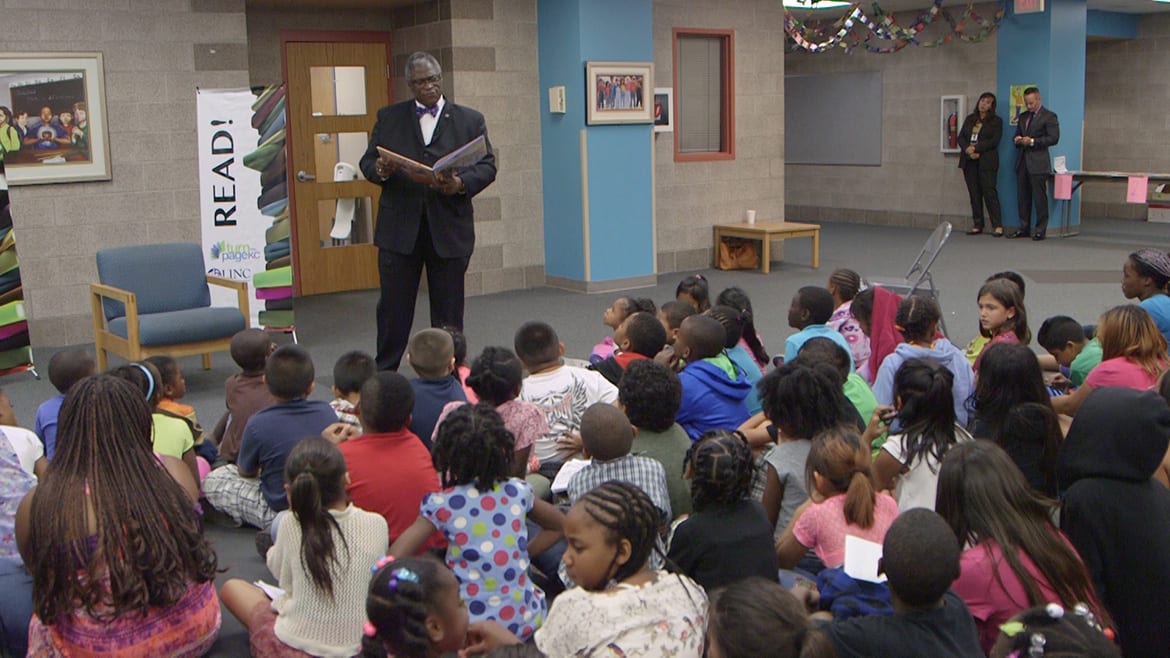 Video by Lindsey Foat and John McGrath, story by Caitlin Cress | The Hale Center for Journalism

As part of the national American Graduate initiative, KCPT is highlighting several community leaders and educators who are making significant, scalable changes to prepare students for success in K-12 and beyond.These stories of local education champions will air on KCPT in the weeks leading up to American Graduate Day on Sept. 27, a live, multi-platform broadcast on public media stations across the country dedicated to the topic of the dropout crisis.

Spend enough time listening to Kansas City, Missouri, mayor Sly James, and you’ll hear him make this claim, as he has done so repeatedly: Education is the #1 economic development tool for any city.

“If we’re able to put up a sign on the streets and the roads that lead into the city that say ‘Best Education in the Country,’ economic development will easily follow in abundance,” he said during an interview in his office July 16.

James doesn’t just talk the talk about education improvements in KC, he also personally walks the walk: as part of efforts to encourage early childhood literacy rates, James reads to a different group of elementary schoolers each week.

“If we’re going to ask others to spend time in their life taking care of children, reading to them, we have to model that behavior,” said Mayor Sly James.

“If we’re going to ask others to spend time in their life taking care of children, reading to them, we have to model that behavior,” he said. “It’s also one of those things that, regardless of what kind of day you’ve had, reading with kids and spending time with kids in that setting makes it a lot better.”

This time spent reading to students is a part of Turn the Page KC, a Mayor James–launched initiative which aims to ensure every Kansas City student can read at grade-level by the third grade. This initiative allows more than 50 local organizations — schools, libraries, community groups and more — to work together towards a common goal of childhood literacy.

“Third grade is … a cutting off point,” James said. “Up to third grade, you’re learning how to read, but, from third grade on, you’re reading to learn.”

Before the launch of Turn the Page in 2011, only 19 percent of Kansas City Public Schools students were reading at grade-level by third grade. Now, three years later, that number has risen to 23 percent.

To encourage this growth, James wants parents to be as involved as possible, especially during summer vacation. He pointed to the “summer slide” phenomenon, where students regress over the summer months, meaning that they have to play catch-up when the new school year begins.

To help facilitate parents reading to their students, Turn the Page recently donated 40,000 books to families.

“The more books that you have in a home, the more likely a child is going to go further and further in education, and thereby be more productive in society,” James said.

Donating books to families that may not be able to afford to purchase them is one way Turn the Page strives to bridge the reading proficiency gap between low-income and middle- and high-income students. James mentioned a statistic that cites a 30 million word difference between low-income students and their more wealthy counterparts— children from more affluent homes hear more words spoken in the household than children from low-income homes. James refers to this as the “word gap.”

“Vocabulary is huge with reading, so we’re trying to find ways to instruct parents and to get them engaged in the process of closing that word gap so their children are better able to comprehend what they read when they start to read,” James said.

Understanding the challenges underprivileged students face is important for educators and parents, but also for community members. Community collaboration — with individual volunteers and organizations — is crucial to creating change. James said the link between financial success and education was finite.

“… poverty and crime are directly tied to the quality of education,” he said. “It’s clear that if you’re trying to work yourself out of poverty, the more education you have, the more options you have to do that.”

The chance of graduating from high school — the first major educational milestone when it comes to hireability — greatly increase if students can read proficiently by third grade, James said.

“That’s what we have to strive for,” he said. “To make sure people understand the importance of third grade reading proficiency and to understand the connection between quality early childhood education and the ability to avoid prison on the back end. We spend much more on prisons than we do education, but we know for a fact that early childhood education would allow us to spend less on prisons.”

“(People) don’t go to the school districts saying ‘Why don’t you reduce crime?’ They come to the mayor,” he continued. “‘Why aren’t you doing more about poverty?’ They come to the mayor. Well poverty and crime are directly tied to the quality of education…. Part of the mayor’s job is to keep those issues out there in the forefront as possible.”