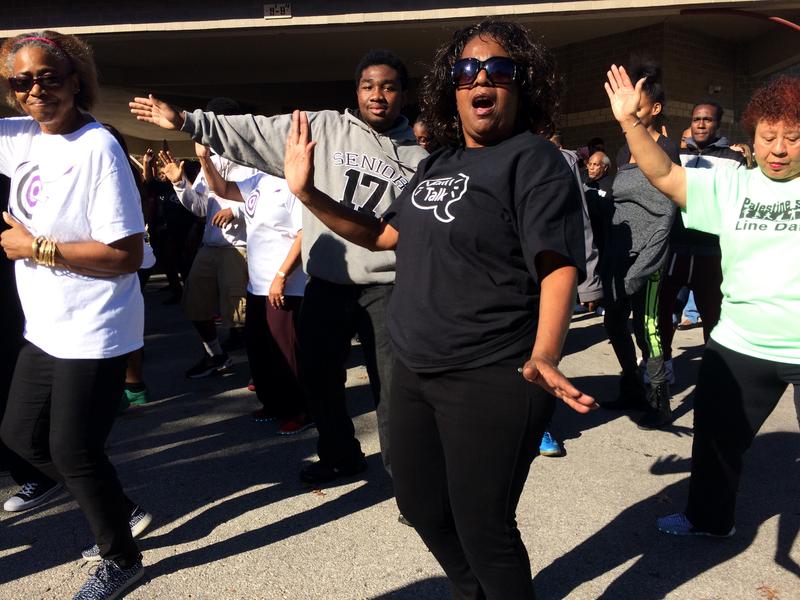 Most Tuesday mornings, the Palestine Senior Activity Center in Kansas City is a pretty quiet place. But recently, high schoolers, community workers and seniors crowded the parking lot. Lots of curious neighbors peeked from porches and through the gates to see what the buzz was about.

With a cue from Lynn Miller of Palestine Missionary Baptist Church, a booming beat exploded from a PA system, and the parking lot crowd seemed to transform into a lockstep dance troupe.

Flash mobs have been used for everything from hawking phone services to proposing marriage. But Miller says she organized this one to help draw people’s attention to diabetes and how to prevent it.

“One of the easiest ways to exercise is to dance, ’cause you can do it anywhere!” Miller says. “You can do it by yourself. You can do it with a group.”

—Alex Smith is a reporter for KCUR, a partner in Heartland Health Monitor, which also includes KCPT and KHI News Service, an editorially independent initiative of the Kansas Health Institute.

A spokeswoman for the Kansas Department for Children and Families confirmed last week that a call center for child abuse reports had trouble keeping up with the volume of calls it received in September but denied the center had a “backlog.”

Foster care contractors learned of the issue in a Sept. 22 email sent by a DCF employee that said the call center was “experiencing a backlog in processing new reports of abuse or neglect, due to a severe staffing issue.”

The email asked family preservation workers with KVC Kansas, one of two foster care contractors, to use an online form for reporting child abuse and neglect instead of calling the Kansas Protection Reporting Center. The email has since been shared on social media and with Heartland Health Monitor partner KHI News Service.

Theresa Freed, spokeswoman for DCF, confirmed that the email did come from a DCF employee but said the call center wasn’t experiencing a “backlog.” She said she defined a backlog as employees being unable to answer or respond to calls.

— Meg Wingerter is a reporter for KHI News Service

It isn’t far from the gleaming bank buildings and high-end hotels to the rent-to-own stores and corner shops that stock more chips than fruit.

A visitor getting off the highway in downtown Kansas City, Kansas, would pass by a Hilton Garden Inn and several high-rise buildings bearing the names of financial companies.

But a few blocks across the Seventh Street Trafficway, the storefronts become more worn down and the food options narrow to McDonald’s and the One Stop Shop, where the only vegetables are jarred tomato sauce and canned jalapenos.

To the east of Seventh Street, the average resident dies around age 72, according to a new study of health disparities in Wyandotte County. Cross the street, however, and that average drops to 59. The next-closest community where most people live into their 70s is west of Interstate 635, about four miles away.

In our NewsHour Shares moment of the day, a program that enables critically and chronically ill children to be part of a sports team. Seven-year-old Ava loves to play soccer. When she was diagnosed with leukemia, she was sidelined from the game. But thanks to Team IMPACT, Ava is now an honorary member of Babson College’s women’s soccer team. From WGBH in Boston, Tina Martin reports.