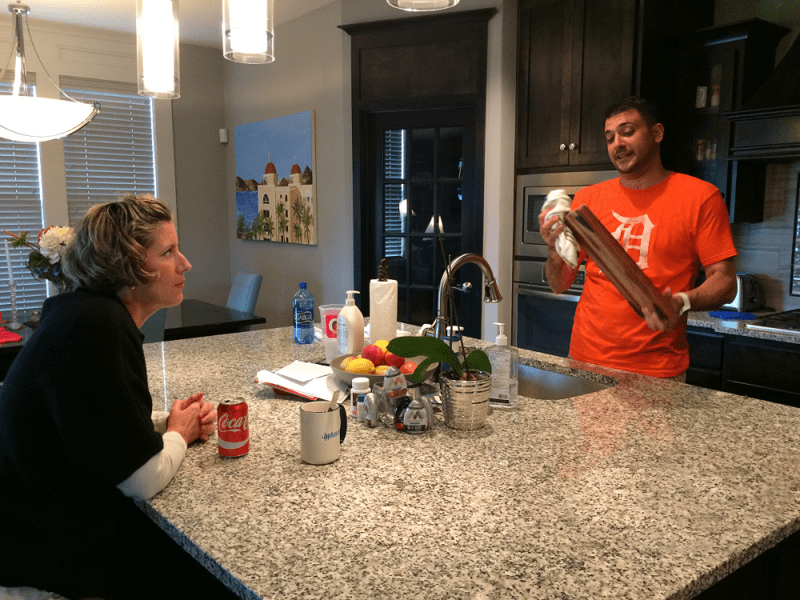 Stephenie Hashmi keeps her husband Shawn company in the kitchen while he prepares dinner. She has appealed the Social Security Administration's denial of her claim for disability benefits. (Alex Smith /KCUR 89.3)
Share this story

By the time Stephenie Hashmi of Lenexa, Kansas, was in her mid-20s, she had achieved a lifelong dream: She was the charge nurse at one of Kansas City’s largest intensive care units. But even as she cared for patients, she realized something was off with her own health.

“I remember just feeling tired and feeling sick and hurting, and not knowing why my joints and body was hurting,” Hashmi says.

Hashmi was diagnosed with systemic lupus, a disease in which the body’s immune system attacks its own tissues and organs.

She’s had surgeries and treatments, but now, at age 41, Hashmi is often bedridden. She finally had to leave her job about 6 years ago, but when she applied for Social Security disability benefits, she was denied.

“I just started bawling. Because I felt like, if they looked at my records or read these notes, surely they would understand my situation,” Hashmi says.

Lisa Ekman, director of government affairs for the National Organization of Social Security Claimants Representatives, says Hashmi’s struggle with the application process is not unusual.

“It is not easy to get disability benefits. It’s a very complicated and difficult process,” Ekman says.

Right now, just about 45 percent of people who apply for Social Security disability benefits are accepted, and getting a hearing takes an average of nearly 600 days.

The Kansas City office’s average hearing time is closer to 500 days, but its approval rate is slight lower at 40 percent.

The backlog started snowballing about 10 years ago, around the time Jason Fichtner became acting deputy commissioner of the Social Security Administration.

He says that during the Great Recession, a lot of people who had disabilities applied but weren’t necessarily unable to work.

“But they’re on the margin,” Fichtner says. “They can work, but when the recession happens, those are the first people who tend to lose their jobs, and then they apply for disability insurance.”

There are now more than a million people across the country waiting for hearings. Adding to the strain, the Social Security Administration’s core operating budget has shrunk by 10 percent since 2010.

This spring, the agency introduced changes to fight fraud and streamline the application process, including a new fraud-fighting measure that removes the special consideration given to a person’s long-time doctor. Lisa Ekman says this is a mistake.

She says this could lead to more denials for disabled people with complex conditions like lupus, multiple sclerosis or schizophrenia. These illnesses can affect patients in very different ways and may be hard for an outside doctor or nurse to assess.

She says more denials will lead to more appeals, which will only increase the backlog.

But former administrator Fichtner, now a senior research fellow at George Mason University’s Mercatus Center, says the agency is obligated to weed out any fraud it can, including the admittedly rare cases of treating physicians tipping the scale in favor of their patients.

He says the administration can still prioritize applicants.

“For patients that are really in dire condition and really have major disabilities, I don’t think they have to worry about this rule change,” Fichtner says.

He acknowledges, however, that the backlog needs attention and says the agency has safeguards to monitor whether the rule is working.

Back in her kitchen in Lenexa, Stephenie Hashmi’s husband Shawn prepares a family dinner she won’t be able to eat because she’s having problems with her esophagus.

Stephenie puts on a brave smile, but the progression of her illness and the ordeal with Social Security have made her increasingly pessimistic.

After several rejections, she’s now on her final appeal. Her hearing is scheduled for November – of   2018.

Alex Smith is a health reporter for KCUR. You can reach him on Twitter @AlexSmithKCUR. For more news on health and other topics, go to kcur.org