By Planting Corn, A Native American Man Hopes To Return To Indigenous Foods 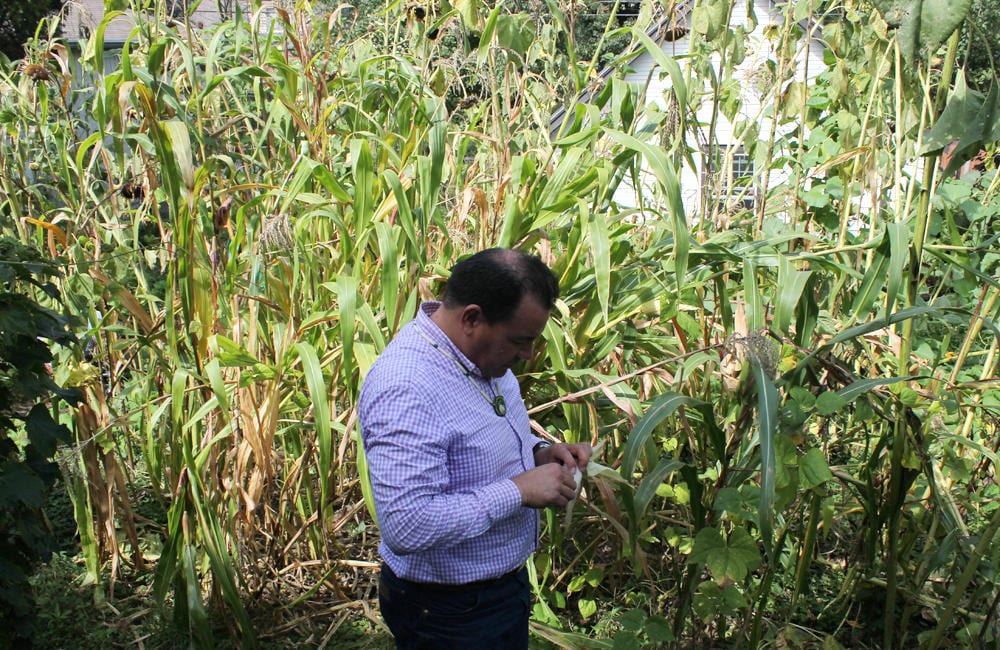 Taylor Keen is a member of the Omaha Tribe and the Cherokee Nation. He's trying to revitalize the corn growing traditions of his ancestors. (Photo: Grant Gerlock | Harvest Public Media)
Share this story

Long before European settlers plowed the Plains, corn was an important part of the diet of Native American tribes like the Omaha, Ponca and Cherokee. Today, members of some tribes are hoping to revive their food and farming traditions by planting the kinds of indigenous crops their ancestors once grew.

Taylor Keen is hoping to lead that comeback in Nebraska. On a warm, bright September afternoon, Keen is singing to the corn. Walking through a maze of corn rows and a carpet of pumpkin vines behind his home in Omaha, Nebraska, he wears a cowboy hat, Wranglers, and a traditional bead necklace.

“Well, this is what was formerly known as my backyard and is now home to the ‘four sisters,’” Keen says. “We have corn, bean, squash and the sunflower.” 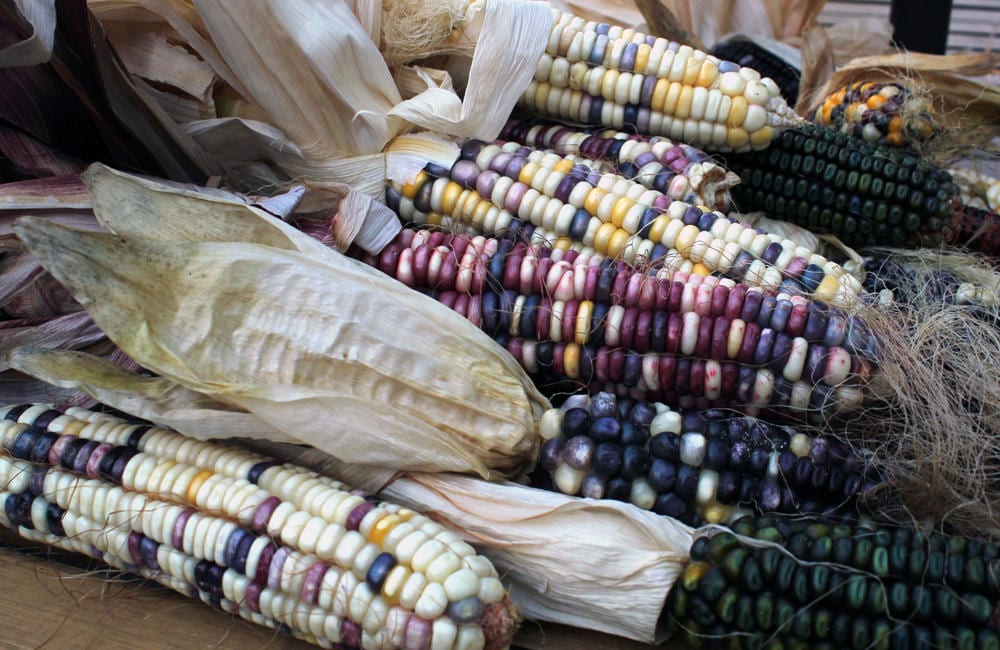 He calls them the four sisters because of how they work together. The beans fertilize the corn as they climb the stalks. Sunflowers hold them up against the wind. Squash keep the raccoons at bay. There are also tomatoes, okra, gourds, sage and sweet grass.

Keen, a business instructor at Creighton University, was never a corn grower, but his ancestors were. Keen is a member of both the Omaha Tribe in Nebraska, and the Cherokee Nation in Oklahoma. To him, it’s ironic that some early developers of commercial seed corn like Oscar Will in North Dakota built their businesses off of genetics acquired from Plains Indian tribes.

“Corn, especially here in Nebraska, is synonymous with apple pie,” Keen says. “But ‘Indian corn’ is only ornamental and is sold only around Thanksgiving time. And most people don’t even think it’s edible. But where does corn come from? It comes from us!”

Keen wants to reclaim those farming roots with a project called Sacred Seed. With help from students and some urban farmers in Omaha, he’s raising indigenous crops on about a dozen plots around the city. The goal is to preserve these native vegetable varieties and revive the traditions around growing and eating them.

The corn in Keen’s back yard is ripe and ready to pick, but it’s not the typical yellow corn raised in the Midwest. Keen raises varieties that were once common on the Great Plains. He grows indigenous popcorn and flint corn that can be ground into cornmeal. There’s also sweet corn called Cherokee White that can be eaten fresh, but he uses it to make flour.

Keen pulls down an ear of Cherokee White and turns it in his hand to show off the colorful kernels.

“While it’s predominantly white, we see these wonderful pastel purples, and dark blues, and goldens, and even a pink or two in there,” Keen says.

Most people have never tried preparing this kind of corn because it takes some extra effort. For instance, flint corn must be soaked in an alkaline solution to dissolve the hard outer layer called the pericarp. That process, nixtamalization, is how corn hominy is made, which can then be ground into masa for tortillas.

Dan Watts, a chef at the high-end Spencer’s steakhouse in Omaha, says once you know what to do, the old corn fits in a modern kitchen.

“I totally think that these items belong on menus,” Watts says. “You can make a great cornbread with it. You can grind it down into polenta, grits, tortillas, and the nutrient load is massive.” 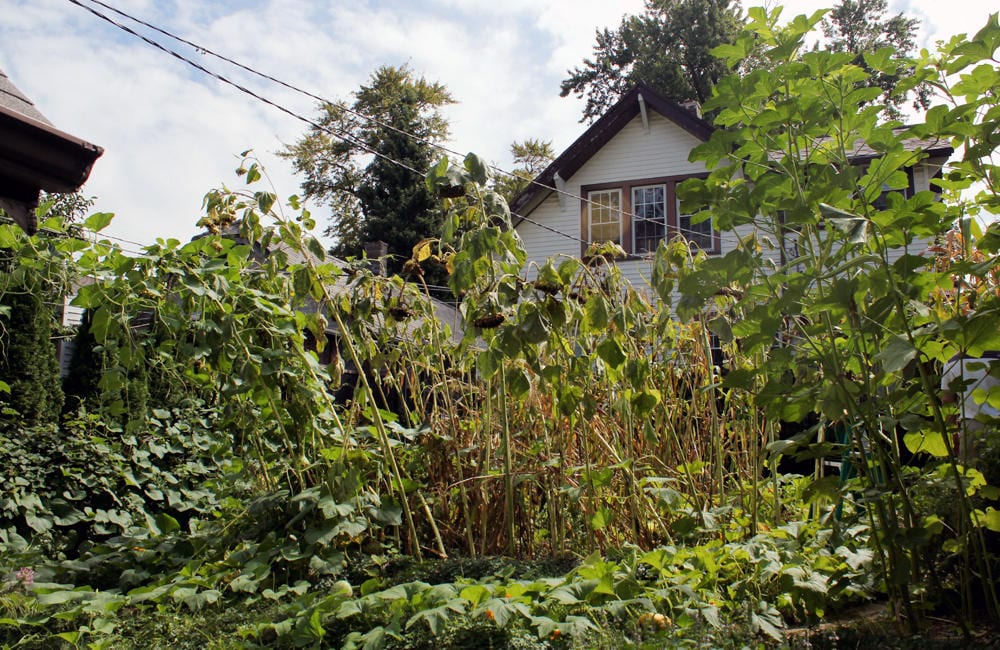 Keen's backyard in Omaha, Nebraska, is teeming with corn, sunflowers, squash, pumpkins and other indigenous crops he is growing to harvest the seeds. (Photo: Grant Gerlock | Harvest Public Media)

Keen's backyard in Omaha, Nebraska, is teeming with corn, sunflowers, squash, pumpkins and other indigenous crops he is growing to harvest the seeds. (Photo: Grant Gerlock | Harvest Public Media)

Keen's backyard in Omaha, Nebraska, is teeming with corn, sunflowers, squash, pumpkins and other indigenous crops he is growing to harvest the seeds. (Photo: Grant Gerlock | Harvest Public Media)
Watts says indigenous ingredients also fit in with the trendy local food scene. Some varieties are sold by heirloom seed dealers like Seed Savers in Iowa orBaker Creek in Missouri.

“This is a movement to really reclaim agriculture at a local scale,” says Robin Kimmerer, an ecologist and writer, and a member of the Potawatomi Nation. “It’s political because it resists industrial agriculture. It says there’s another way.”

Planting indigenous seeds instead of high-tech hybrids can reintroduce vegetables that have mostly been lost. Kimmerer says projects like Native Harvest, started by the Ojibwe in Minnesota, or the Cherokee seed exchange value tradition more than technology.

“People are really taking control of their own food supplies by growing their traditional varieties by learning again to collect and gather from the wild,” Kimmerer says.

Taylor Keen is inspired by his tribe’s history. He says in the 19th Century the Omaha were prolific corn growers and traders. The tribe was able to almost entirely provide for itself at a time when others relied on provisions supplied by federal agents.

“In my mind I envisioned a future where everyone in my tribe can be corn planters again,” Keen says. “That somehow we could sustain ourselves, be economically self-reliant again, with these crops.”

Realistically, indigenous corn is not going to overtake the industry that feeds ethanol plants and cattle feedlots, but perhaps it can provide a few jobs for tribal members. Keen believes it’s worth looking to the past if it can help his people move forward.

curiousKC: A Visual History on Racial Distribution in the Metro

You Asked, We Found the Connections