Above image credit: Café Corazon’s eye-catching mural, a representation of “all the Latin cultures that have found their way to Kansas City,” was painted by local artists Rodrigo Alvarez and Isaac Tapia. (Jill Wendholt Silva | Flatland)
Sponsor Message Become a Flatland sponsor

A caffeinated beverage similar in many respects to tea, yerba mate (MAH-tay) makes up half of the menu at the Latinx coffeeshop at 1721 Westport Road, which is recognizable to passersby for a striking spray-paint mural of Frida Kahlo on the side of the building.

Inside the café, an elderly Spanish-speaking couple enjoy alfajores (AL-fa-HOR-es), a macaroon-like sandwich cookie filled with creamy dulce de leche, while Castagna-Herrera talks through a tasting, starting with the country of origin I would be most familiar with – Brazil – and the flavors that I typically gravitate toward – chai spice.

“Most people who have written about us just focused on the coffee, probably because they are not familiar with yerba mate,” she says.

“It’s an education, and we definitely want to get it right because we are representing a vast amount of people in other countries that drink yerba mate,” says co-owner and husband Curtis Herrera, who comes from a Mexican and Apache background.

So far, only 20-25% of Café Corazón’s customers regularly order yerba mate, probably because non-Latin consumers are usually most familiar with energy drinks containing the herb. Throughout Latin and South America, the caffeine-rich drink is a common substitute for coffee and the rituals surrounding its preparation offer an opportunity to build a sense of community.

“I feel like if we were on the coasts people would be eating it up, but here it is a much slower sell,” says Castagna-Herrera, who learned to prepare yerba mate from her Argentinian immigrant father while growing up in New Mexico.

Mate contains the leaves and twigs of the llex paraguariensi, a relative of the holly plant. The loose-leaf tea is traditionally prepared inside a calabash gourd with hot water added to steep, although mate can also be made with steamed milk or even cold water, a preparation known as tereré (TAY-rey-rey).

Indigenous people, starting with the Guarani tribe of Parana in southern Brazil, first drank yerba mate for its mellow buzz and health benefits. In the southern Brazilian state of Rio Grande do Sul, cowboys called gauchos rustle cattle and drink mate, which in Portuguese is known as chimarrão (SHE-ma-hown).

My husband is Brazilian, so on my first trip to Café Corazón, even if the words were not the same I recognized the ritual’s elements: a brand of mate in a bright yellow package; a contemporary spin on the mate gourd; silver straws with an infuser on the end known as bombilla (BOM-bee-yah); tiny brushes for cleaning the straws; and even a display of thermoses for hot water.

To learn the technique of packing my cup with mate, the Herreras instructed me to place a hand over the top of the cup to create suction, turning it upside down and shaking, which leaves a dust ring in the palm of the hand.

When the cup is held sideways, a “hillside” of plant material forms. Water or milk is trickled on top. The cup can carefully be tilted upright and a metal straw is carefully inserted from the opposite side, just touching the bottom of the hill. Once the straw is inserted, it should not be moved, or the leaves may clog the holes of the infuser.

Argentina is currently the world’s largest producer of mate. Like coffee beans from around the world, mate is graded by the yerba (the size of the herb’s leaf), palo (how many sticks are allowed in a blend) and povo (referring to how much dust is in the blend).

Each blend has its own flavor profile – some with herbaceous, grassy notes, others with vegetal, earthy and sometimes even smoky notes, depending on where it was grown and if it was air-dried or lightly smoked. The Café Corazón menu also offers flavor add-ons, such as chamomile tea, lavender, rose petals, hibiscus flowers, honey, mint, orange peel or espresso.

“One thing we are not able to experience right now, which sucks, is the whole (loss of the) cultural component of mate due to the pandemic,” Castagna-Herrera says. “Mate is so fun because you are getting caffeinated, so you’re talking more and more and more, and faster and faster, and it just keeps going around. We’re trying to adapt, but I miss that.”

In non-pandemic times, there is an etiquette to sharing the drink as the gourd travels the circle, including not hogging the bombilla like a microphone, or making sure to slurp at the end so others do not partake in another’s backwash.

“I was thinking about how gauchos are surviving now,” says Maribel Nelson, who was born and raised in Rio Grande do Sul and lives in Blue Springs, where she works as a personal trainer and a Mary Kay consultant.

“In the past, in my hometown, you would have had mate everywhere, like even at the bank, which is weird now. You wouldn’t kiss strange people on the mouth, but you would have a drink from the cuia (kwee-YAH, mate gourd in Portuguese), and we never thought about it until the pandemic.”

Nelson recently put out a call to form a traditional mate circle — an informal meetup for sipping and talking — on a local Brazilian social media platform. On a Sunday afternoon, she arrived at Overland Park’s scenic South Park with her Missouri-born husband, Ted, and their 9-month-old daughter, Joy.

In addition to a diaper bag for Joy, they also brought a leather backpack designed to neatly fit a thermos, a canister of tea, as well as related paraphernalia, such as a disc slightly larger than a CD to catch the dust, an ornate leather cover to protect the mate hill from landslides and a fine mesh covering to store the straw in.

When the Nelsons got married, Maribel’s grandfather gifted the couple with a monogrammed cuia and an ornate silver straw made of gold and silver.

Ted Nelson, who is a remote worker for Garmin, has become a mate devotee, and drinks the brew almost daily until the leaves are lavado (washed out). His co-workers often quiz him about the packed green mass in his cup, which in classic Brazilian style is less leaves and sticks and more deep green powder that looks similar to Japanese matcha.

“Someone said, ‘What is that? Did you get it off the bottom-end of a lawn mower?’… I just say ‘It’s Brazilian green tea,’” he says. He said the same to a lady who once told him not to do drugs in the park.

He has become proficient at packing his mate hill until it’s smooth and flat “like freshly fallen snow before you step in it.” He likes mate because it doesn’t give him the same caffeine jitters as coffee.

“I just like it because it makes me feel more chill and relaxed,” he says.

A soccer fan, Ted Nelson adds that mate is also a favorite brew of South American soccer players, who often can be seen drinking the brew on the sidelines of a game.

The mate circle also includes Juçara “Sara” Bressan, who works for the Social Security Administration in Kansas City. Originally from the Brazilian state of Santa Catarina, she grew up drinking mate with milk and sugar for breakfast as a child.

Bressan arrived with her long-time friend Matt Henderson, an architect from Overland Park. Like Bressan, Henderson wore a green and yellow national team soccer jersey but added an American cowboy hat of woven straw – the same hat he wears when playing in a rock band called – wait for it – Just Add Water. 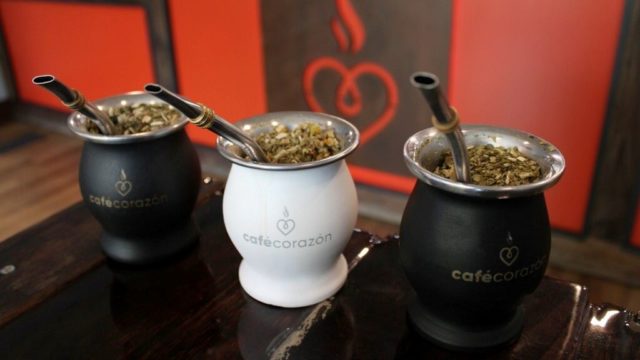 “I’m a gaucho falsificado,” Matt jokes, inventing a phrase to connote a false cowboy. But he’s a fan of “anything cowboy,” which means he also has become a mate fan proficient at packing his own cuia, a souvenir from a trip he took to Brazil.

“It’s not really conducive in the age of COVID,” Henderson says, “but I love the communal aspect and you share the drink with your family or group and it’s an all-day thing.”

The Brazilian and American strangers talk and sip for several hours on a picnic bench, learning about each other and periodically refilling their cups with more hot water. Brazil, which is larger than our contiguous 48 states, divides along regional and cultural lines, including the African in the north and European in the south.

Meanwhile, the Herreras are busy getting ready to open a second Café Corazón location at 110 Southwest Blvd. in the Crossroads Arts District. The much larger 3,000-square-foot space will allow them to host traditional mate circles and other events for Kansas Citians of every stripe.

“It’s like a ceremonial thing, a community building exercise,” Curtis Herrera says. “When we have friends over, that’s what we do.”

Jill Wendholt Silva is a James Beard award-winning food editor and freelance writer. You can follow Silva at @jillsilvafood.