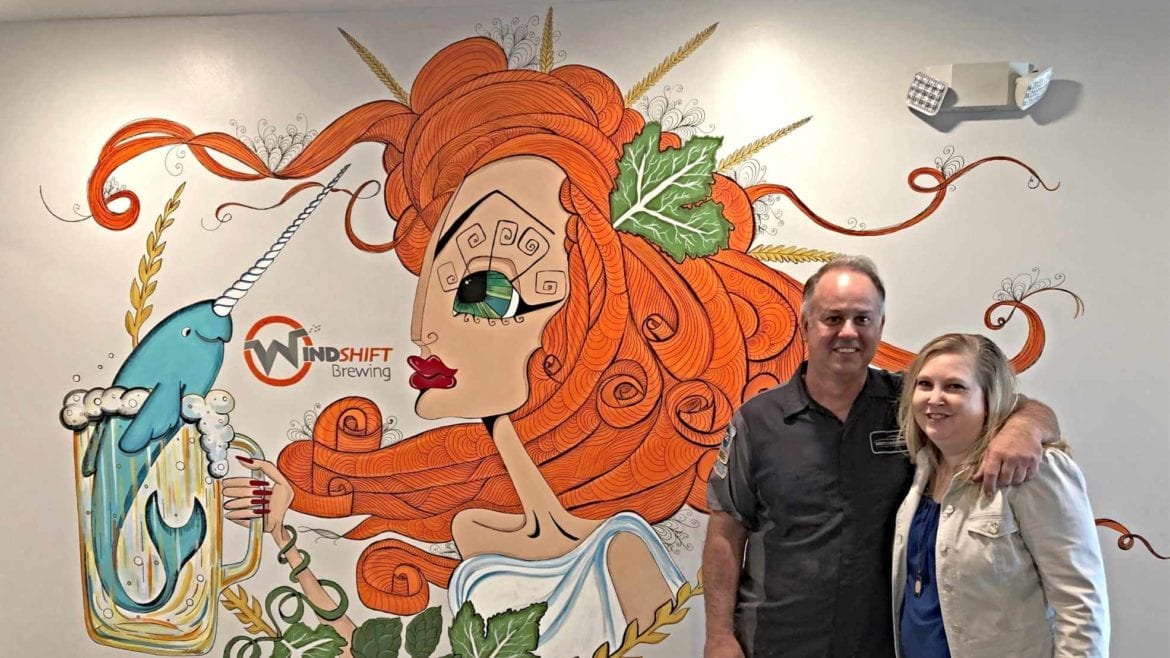 Tony DiPlacito’s hands and forearms are smudged black, the streaks stretching nearly to the cuffs of his auto technician’s shirt.

When he sees a visitor walk into the bays of the Jefferson Service Center in Blue Springs, Missouri, he half-waves and cracks a big smile from beneath a sedan that’s on a lift a few feet above him.

“The brewery is right there,” DiPlacito says, walking toward a door in the back corner. Less than 20 feet from the garage where he’s standing is the future home of Wind Shift Brewing Co. (3421 NW Jefferson St., Suite B).

Lynn DiPlacito, Tony’s wife, is on the other side of the door. She’s sitting at a folding table — a makeshift office for the husband-and-wife team behind Wind Shift, which is slated to open in May.

“The whole market has gone hyper local, there’s been such a wind shift,” Lynn DiPlacito said of the name.

“If [Tony] didn’t brew here, he’d be doing it in our basement,” she added. “So, we sold our house. This is our retirement plan.”

A few feet from her is a large mural of Ninkasi — the Sumarian beer goddess — holding a mug with a Narwhal spilling out the top by artist Herb Schell. Tony Diplacito walks in, drying his hands with a rag, and explains that his wife wanted a narwhal and he wanted Ninkasi, so Schell found a way to work both into the painting.

The couple has been searching for a home for Wind Shift for the past five years, looking at spaces from the Crossroads to Blue Springs. They wanted to find something that reminded them of their favorite breweries on the West Coast.

“The most memorable breweries were those tiny, tiny ones like AleSmith [Brewing Company] in San Diego,” Tony DiPlacito said.

Wind Shift will be tiny, and certainly, unorthodox. It shares a building with the service center, where DiPlacito has worked for the past two decades, and it’s tucked behind a set of auto bays. A former Union Tape Co. warehouse, the 1,100-square-foot space has polished concrete floors and a bar made of German beech wood. The couple signed a lease in November and began work in December 2018.

When it opens (becoming the second brewery in Blue Springs after East Forty Brewing Co. opened last year), Wind Shift will have a max indoor occupancy of 29 people. The couple is hoping to add an outdoor space with a crowdfunding campaign on Indiegogo.

DiPlacito began brewing nine years ago when his wife got him a homebrewing kit. He approached brewing like his work in the garage, running diagnostics on every bottle he produced. He’d make the same beer, only with a different malt or hop bill, and took reams of notes to track what happened.

He also began to share his beer, trading brews for veggies with his neighbors. When it became too many bottles to wash, he started giving growlers out. His neighbors would then leave the empties out on their front steps for him.

“I was kind of like the milkman, just with beer,” Tony DiPlacito said.

When Apex opened in Lee’s Summit, Missouri, last October, DiPlacito helped out in the brewhouse. His English mild and a New England-style IPA with peaches proved popular.

A one-barrel pilot system is just to the right of the taproom in Wind Shift. DiPlacito has an American Pilsner in the fermenter and plans for making a coconut chocolate porter (Lynn’s favorite). As a homebrewer, he was known for English beers and expects those, alongside a French saison on the taps. Wind Shift will also have 16-ounce growlers.

When Wind Shift opens, Lynn envisions asking people on Facebook to vote on beer ingredients. Tony has also been talking with other local breweries about collaborations and the possibility of scaling up one of the initial beer lineup, if it proves popular.

While the hours aren’t final, Wind Shift will likely be open from 5 to 9 p.m. Thursday and noon to 10 p.m. Friday and Saturday. The brewery will have a license to serve on Sundays, but the couple hasn’t made a final decision on staying open for the whole weekend.

Brewers Band Together to Help Hospitality Workers Affected by Pandemic