Tap List typically leads off with a single local craft beer news item of note. This week, though, there is just too much cool stuff going on to limit your selection. Consider what follows a local beer news sampler.

First up is an update on the new concept Martin City Brewing Co. has been building out called Station 7. Martin City Brewing officially opened the doors to Station 7 on April 15. Located in the Lake Lotawana area, Station 7 is a cross between a coffee shop and restaurant. The coffee shop is open in the mornings for breakfast and run by Loves Coffee out of Lee’s Summit. Come lunch time you’ll be able to grab pizza and brews.

On Wednesday, April 20, Strange Days Brewing Co. will be hosting the first ever Lagerpalooza. In a world filled with hazy IPAs, fruited sours and decadent pastry stouts, the folks at Strange Days wanted to highlight the clean, crisp intricacies of various lagers. They won’t be going at it alone, though. Strange Days invited several breweries to showcase their lagers. You’ll be trying beers from spots like City Barrel, Big Rip Brewing Co., Stockyards Brewing Co. and many more.

The third anniversary bash for Servaes Brewing Co. kicks off on Thursday, April 21, and will go on through Sunday, April 24. Over the course of four days, Servaes has planned more than 25 different beer releases. Each day will also feature a different food truck, delicious treats and a brand new line of merch to mark the occasion.

Finally, there’s a weekend gathering for a good cause. On Saturday, April 23, craft beer bar Bier Station, located in the Waldo neighborhood of Kansas City, will be throwing a massive benefit event called Stand With Ukraine. They’ve partnered with the Ukrainian Club of Kansas City to support Razom For Ukraine, an organization providing medical supplies for Ukrainians.

Multiple local breweries will be participating in the event, including Sandhills Brewing, Crane Brewing Co. and more. In addition to donating a portion of the day’s sales to the organization, there will be a silent online auction to help raise even more funds. You can bid on items such as a Space Camper Longboard from Boulevard or beer and gift packages from Sandhills. 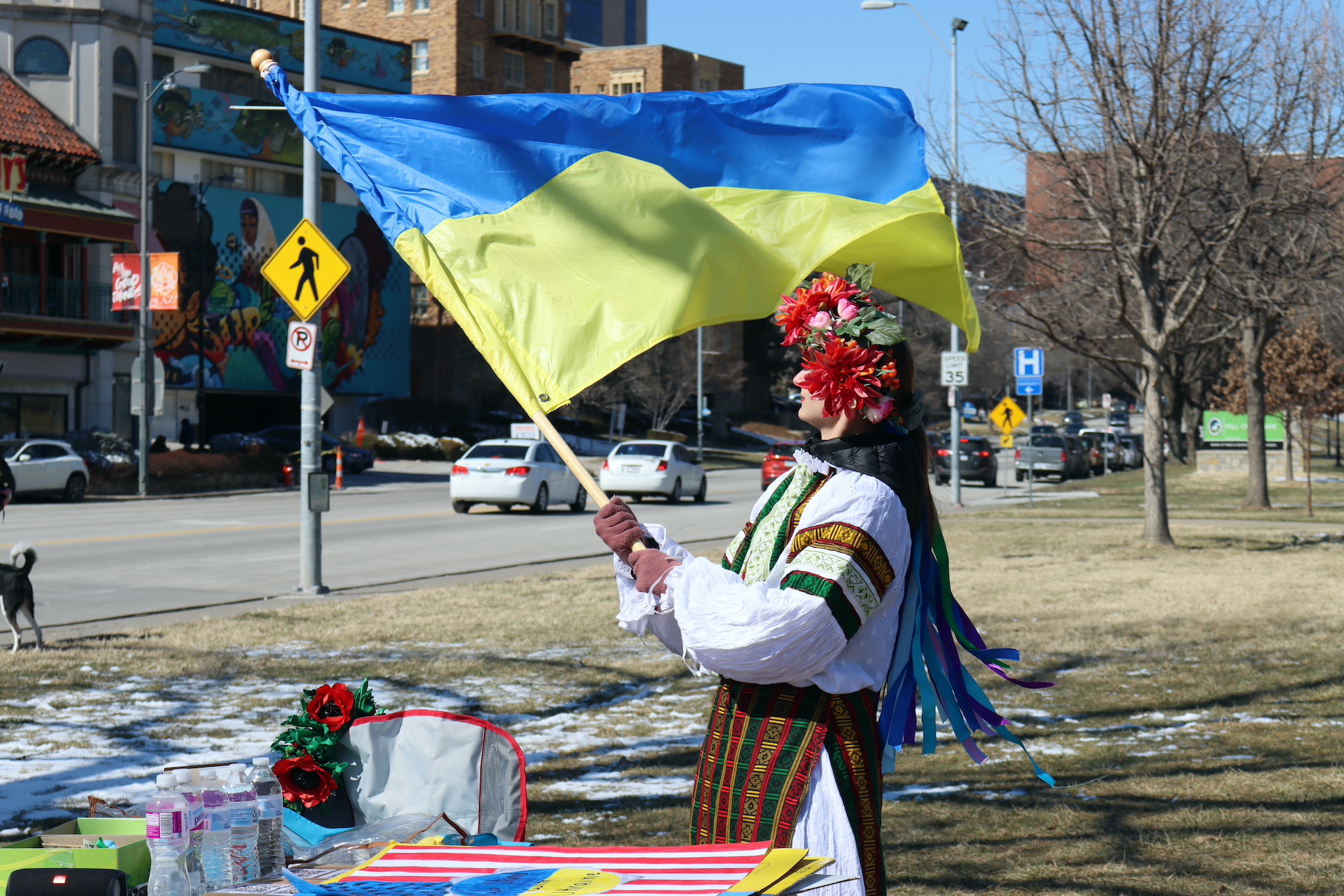 Fighting for Ukraine’s Independence Here in the Heartland The Ukrainian Club of Kansas City moves away from cultural activities as members search for ways to support the war effort in their home country.

Not Lost Brewing Co. — 229 S. Main St., Ottawa, Kansas — has a new beer release just in time for Easter. Reminiscent of Whoppers (or malted Easter eggs), they put out Malted Milk Stout. The 6.4% ABV beer was brewed with malted milk, milk sugar and vanilla beans to give it that authentic malted malt ball flavor.

Transport Brewery — 11113 Johnson Drive, Shawnee, Kansas — isn’t scamming anyone with their latest brew. Released on National Pecan Day, The Pecan Artist is a deliciously robust pecan porter. Coming in at 5% ABV, this beer was aged on American oak staves with 20 pounds of pecans. It’s bold and roasty with lots of pecan notes.

Apex Aleworks — 4356 S. Noland Road, Independence, Missouri — released the beer their March homebrewing class created together. Enigma is a black IPA that clocks in right around 8% ABV. The carafa and chocolate malts help give this beer its dark color. It has plenty of hoppiness provided by the Summit, Chinook, Centennial and Cascade hop blend.

Rochester Brewing Co. — 2129 Washington St., Kansas City, Missouri — is getting tropical with the release of their Mango Creamsicle IPA. Coming in at 5.5% ABV, this beer was brewed with pureed mangos, Madagascar vanilla and milk sugars. If you didn’t know any better you would think you were drinking a melted popsicle.

River Bluff Brewing — 201 Main St., Kansas City, Missouri — is at it again with another new KC-brewed beer. Their latest release is Sun Bulges, a 7% ABV saison. This saison was brewed with elderflower, rye and orange peel. The combo provides bright flavors perfect for sipping in the sunshine.

BKS Artisan Ales — 633 E. 63rd St., Kansas City, Missouri — has new beer available. Named after a street in their neighborhood, Kenwood is a 5% British golden ale. Flavor notes include biscuit, bread and a bit of nuttiness with aromatic notes of orange marmalade.

Boulevard Brewing Co. — 2501 Southwest Blvd., Kansas City, Missouri — is partnering with Nature’s Educators for an entirely new take on a meet and greet. Taking place at Improper City, The Birds & The Beers will allow you to get up close and personal with various birds of prey. Space Camper will be on sale for $3 with the entire cost of the pint being donated to Nature’s Educators to help them build a new public nature center.

Casual Animal — 1725 McGee St., Kansas City, Missouri — is throwing an Earth Day party featuring several local vendors. Designs By Bru will be at the brewery from 4-8 p.m. to help you create your own tye dye shirts. You can treat yourself to a new plant for Earth Day from Virgil’s Plant Shop, which will be at the brewery from 4-7 p.m. Tim Sum will be on hand serving up dim sum dishes all night with sweet treats on sale from The C Word Cakery.

Cinder Block Brewery — 110 E. 18th Ave., North Kansas City, Missouri — is hosting Puppy Yoga at their brewhouse. Not only will you get the benefit of a relaxing yoga flow, but there will be lots of puppy therapy! Sip some beers, stretch your body and love up on puppies. Tickets are $35 each and include one free drink ticket. All of the proceeds will benefit local pet shelters and rescues.

East Forty Brewing — 1201 W. Main St., Blue Springs, Missouri — is throwing a giant two-day event in honor of Earth Day. Dubbed Save The Bees & The Bee Green Market, the event is part beer release, part education and part local vendor market. Saturday will feature the release of Calm Me Maybee, a honey and lavender IPA. Colonial Gardens will also be in the house teaching all about pollinator plants. A beekeeper will be there to talk about all things bees. Sunday will be the market event featuring several local vendors including Burr Oaks Farms, Green Dirt Farms, Recyclverse and many more.

ExBEERiment — 925 E. Lincoln Lane, Gardner, Kansas — is hosting an intimate Restorative Yoga & Beer session in their taproom. Limited to just 12 people, this yoga session will be slow-paced and feature deep stretching, great for those with chronic pain. Tickets run $12 and include one free pour.

Crane Brewing Co. — 6515 Railroad St., Raytown, Missouri — has a unique fitness event happening at the brewery. Crane will be hosting a Hoops & Hops session put on by Simply Fitness KC. The 60-minute class will be chock full of hula hooping. Tickets cost $16 and include one free beer.

Transport Brewery — 11113 Johnson Drive, Shawnee, Kansas — is partnering with Wayside Waifs for Best Friend Bingo. Bingo cards cost $10 and include one beer or wine. Additional cards can be purchased for $5. Prizes will be awarded to the winner of each of the five rounds. Proceeds from the event will benefit Wayside Waifs.