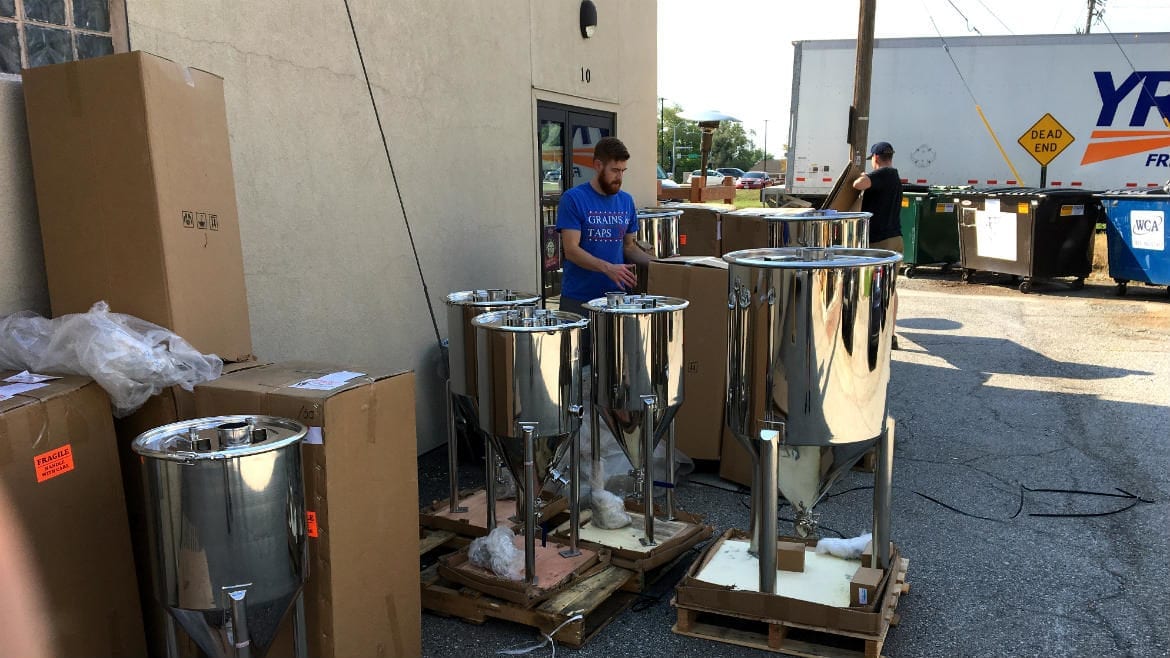 Brian Bixby and Brian Freymuller (back) unpack the fermenters for the brewery in the works at Grains & Taps. (Contributed | Grains & Taps)
Share this story

Brad Boehm still remembers the moment in February when he came to Grains and Taps, the business he co-owns with Brian Bixby, and smelled smoke. He wondered if it was the pizza oven, never suspecting that a bathroom exhaust fan had caught fire and the ceiling insulation had begun to smolder.

The ceiling had to be removed, along with the attached plumbing and electrical. And suddenly, a small fire looked an awful lot like a complete remodel for the five-year-old homebrew supply shop.

“Brian and I had always danced around the topic of opening a brewery, but we realized that if this isn’t the time to do it, I don’t think it’s something we’ll ever do,” Boehm said.

And so they looked at how they could add a brewhouse to the existing taproom and homebrew supply shop. Grains & Taps is in the midst of a Kickstarter in the hopes of speeding up the process of expansion. Boehm is hoping to get barrels to start up a barrel-aging program.

Grains & Taps has sponsored an annual homebrew contest, the Blarney Brewhoff, that has helped showcase local talent and launch breweries like Cock-A-Doodle Brews out of Lonejack, Missouri. Boehm said he is inspired that their brewery would be the fourth in Lee’s Summit, joining Smoke Brewing, Fringe Beerworks and New Axiom Brewing Co.

“It’s amazing to see what the community has built around us,” Boehm said.

Boehm and Bixby have homebrewed together for years, but they are tapping Brian Freymuller, who manages the homebrew side, to be their brewer.

“We want to do a lot of educational things with beer and make good examples of classic styles,” Boehm said.

The ability to brew in small batches — 15 gallons at a time — means that Freymuller could theoretically host a class where he tweaks a single variable, such as temperature, to point out how adjustments can impact the flavor of a beer.

Boehm expects the beer they brew for the taps to be brown and red ales, solid examples that are meant to be true to a style.

“We’ll be at the smallest scale, and then to have something from Germany and Belgium right next to that [on tap] will be pretty cool,” Boehm said. 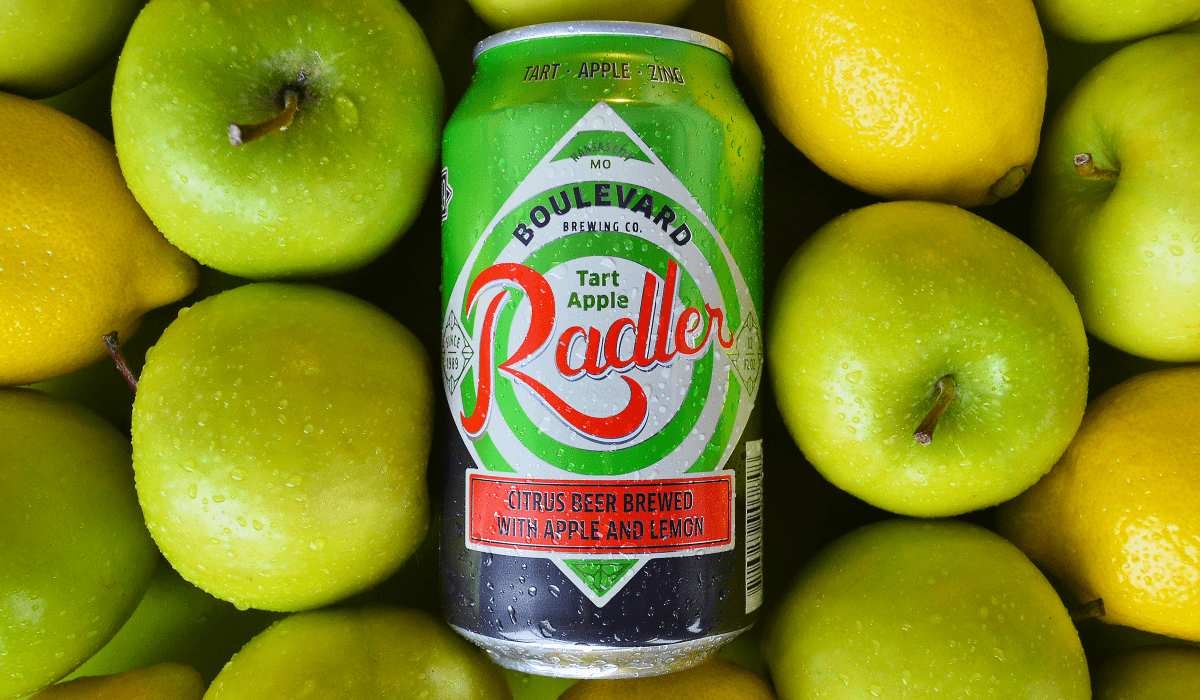 The Lawrence Beer Co. (826 Pennsylvania St., Lawrence, Kansas) hosts Luau for Limbs, a benefit for Steps of Faith, from 5 to 8 p.m. on Sunday, Sept. 16. Your $35 admission gets you a luau diner and three Tiki drinks.

The Boulevard Brewing Company is set to release a tart apple radler and Hazy IPA, a collaboration brew with WeldWerks Brewing Co. out of Colorado, today. 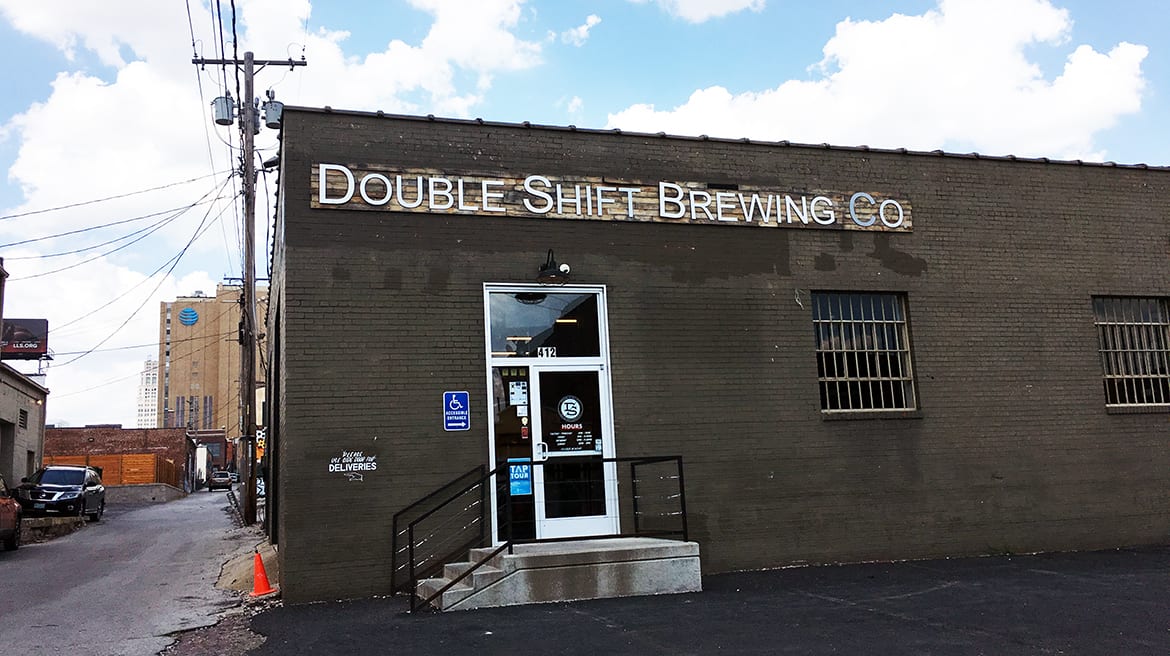 East Forty Brewing (1201 W. Main St., Blue Springs, Missouri) launches The Tuesday Sessions today. It’s an open mic night from 6 to 9 p.m. with Kristopher Bruders and drink specials: $4 beers and $7 for a beer and a shot.

What do you think the flavor of the Crossroads should be? Casual Animal Brewing Co. (1725 McGee St.) collaborated with Normal Human to create Lickety Split (7% ABV), a tart ale made with 40 pounds of cherries and nine pounds of key lime puree. The beer releases tonight for First Friday.

Belgian beers and a picnic get mashed-up in Grain to Glass’s Picnique Belgique Festival at 4 p.m. The outdoor event will be in the lot next to Grain to Glass (1611 Swift Ave., North Kansas City, Missouri) with Belgian beers from home and pro brewers, fries, a waffle from The Waffler truck and fruit pie. Brewer Peter Bouckaert, a native of Belgium and the former New Belgium Brewing Co. brewmaster, will be on hand to speak about his new book and brewery. Tickets are $47.50 at the door.

Colony KC (312 Armour Road) is celebrating its first anniversary. They’ve got a trio of beers slated for the party: an imperial passionfruit wheat, a brown sugar rye barrel-aged honey biscuit ale (roughly 10% ABV) made with biscuit and honey malts and lactose, and a whiskey barrel-aged Samsquanch dark plum sour with vanilla bean.

Across the street from Colony, Calibration Brewery (119 Armour Road) is hosting its second annual brew fest from noon to 4 p.m. Colony, Smoke Brewing, Dubious Claims, Big Rip and Cinder Block are among the breweries participating. Tickets ($25) include a sampler glass, live music and beer samples. The event is a benefit for the KC Pet Project.

KC Bier Co. (310 W. 79th St.) is releasing Kingdom Lager (5% ABV, 23 IBUs), a red lager to coincide with the start of football season. The beer will on tap at the Bierhalle for the entire season.

Nick & Jake’s (5031 Main St.) is hosting an Oktoberfest-themed beer dinner featuring KC Bier Co. The five-course dinner ($55) begins with a welcome beer and then pairs a butternut squash bisque with Festbier and a roasted pork loin with Der Hammer.