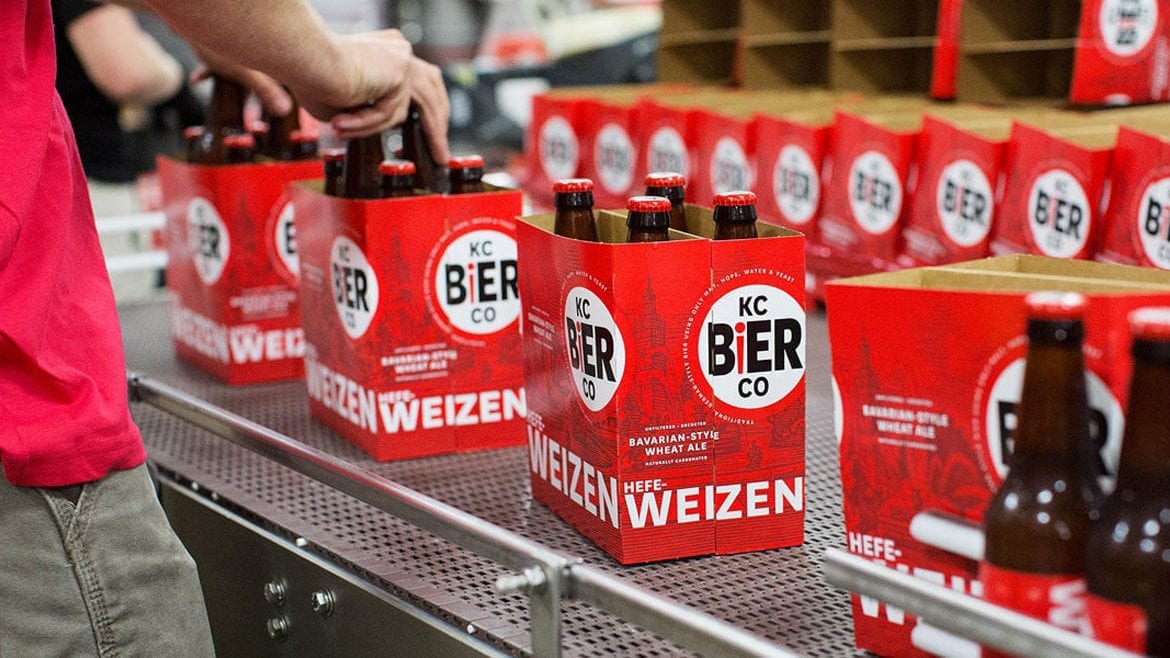 Kansas City Bier Company (310 W. 79th St.) will pour more than 30 different beer styles at its fourth anniversary celebration from 1 to 5 p.m. Saturday, Feb. 17. For the occasion, look for year-round and seasonal beers as well as special releases and rare one-off brews. Spontaneously fermented cider or dry-hopped, red lager at 11-percent ABV, anyone?

The brewery has plenty to celebrate. Kansas City Bier Company has grown at a steady clip in four years. The brewery’s German-style beers are distributed by ten wholesalers in 36 counties in eastern Kansas and northwest Missouri, according to founder and managing partner Steve Holle.

Nationally and locally, many craft breweries have adapted to ongoing shifts in consumer tastes and emerging trends. For example, numerous breweries of all sizes have experimented with New England-style IPAs, barrel-aged beers, or fruit-forward sour beers in recent years.

Meanwhile, KC Bier has stuck to its original focus to produce authentic German-style beer and to serve it at the same level of freshness that one would experience in Germany, Holle said.

The brewery imports German malt and hops and follows traditional brewing techniques to produce popular beers including Dunkel and Helles.

“Almost 85-percent of all the beer we sell are lagers,” Holle said. “We make a few American interpretations of German styles, such as Der Hammer Dry-hopped Pale Doppelbock/India Pale Lager, but generally we make traditional German styles.”

KC Bier maintains freshness by focusing on local distribution rather than expanding throughout the region or nation.

In addition to an expanded roster of beers at its celebration, KC Bier will have a chili bar, a 7-ounce stange glass (for four-ounce beer samples), and a souvenir half-liter krug. Tokens may be purchased for beer, chili and glassware.

Trampled Rose Tart Cherry Sour by Double Shift Brewing is inspired by cherry pie and a craft beer antidote for a broken heart or craving for a fruity sour beer. (Pete Dulin | Flatland)

Brewery Emperial master brewer and co-owner Keith Thompson shared that the brewery (1829 Oak St.) is brewing a kolsch and an all-wheat wheat wine soon. Hot Worties are still available on brewing days. Thompson, who created the perennial crowd favorite Ginger Shandy for McCoy’s Public House (4057 Pennsylvania Ave.), is now working on a ginger beer project for spring. Biscuit, part English ESB and old-school American Pale Ale, is now on draft exclusively at Room 39 Midtown (1719 W. 39th St.), but will be distributed on tap around Kansas City in the near future. Vienna Lager (5.5-percent ABV, 30 IBUs), brewed months ago and tapped for the brewery’s first anniversary in early February, is a Northern German-style Lager brewed with copious amounts of Munich and Vienna Malts and noble hops for a balanced flavor and aroma.

Tap List | Brewery Emperial Serves Hot WortiesBrewery Emperial (1829 Oak St.) now offers “hot worties,” fresh from the brewing kettle. A hot wort, similar to a hot toddy, is free while supplies last only on brewing days, starting at 4 p.m., with the purchase of a…

This week, Cinder Block Brewery (110 E. 18th Ave., North Kansas City, Missouri) releases Amber Block (5.7-percent ABV, 23 IBUs), a new cold-fermented seasonal. Amber Block exhibits medium maltiness followed by a slight bread characteristic, mild caramel notes, and a hoppy dose of citrus and fruit flavor and aroma. Heart Breaker Cider, a collaboration cider made by Cinder Block and Screenland Armour (408 Armour Road, North Kansas City, Missouri) will be on tap at the movie theater for the screening of “The Princess Bride,” on Feb. 14. The cider will also be released at the brewery that day.

“For 10K, we took our popular 5K IPA and increased the malt and hops to get this double version,” head brewer and brewery co-owner Gene DeClue said. “Like the original, we use six different hops to get a great citrus and fruity hop flavor. It’s not for the weak! Katiebug Kolsch is a beer fermented at ale temperatures and conditioned cold to give it a slightly dry finish. A light hint of citrus comes from the Mandarina Bavaria hops.”

Monday marked the fourth anniversary of the brewery’s opening at Martin City Brewing Company (500 E. 135th St.). Timed with its anniversary, the brewery released two beers at its taproom with limited availability on draft and in cans throughout Greater Kansas City. Righteous Candor IPA (5.6-percent ABV) is hazy while Imperial Alchemy Coffee Stout With Vanilla Beans is a flavor-boosted variant on the brewery’s popular Alchemy Coffee Stout. This stout comes in nitro cans for a creamy head when pouring, but the draft version is not served with nitro.

Weston Brewing Company (500 Welt Street, Weston, Missouri) has its Irish Cream Ale on nitro at International Tap House (403 E. 18th St.). Nitro Irish Cream Ale is also available at Stagecoach Tavern (9617 W 87th St., Overland Park, Kansas). According to the brewery, the beer was originally brewed in 2006 to be served this way. When Weston Brewing started bottling it, they switched to a standard CO2 draft. Also, Father Mescan’s Bog Myrtle Ale is now available in cans at the brewery’s American Bowman restaurant in Weston and throughout Kansas City.

While flavored variants of its milk stout are no longer on tap, Border Brewing (406 E. 18 St.) still has limited bottles of its Raspberry Milk Stout and Chocolate Mint Milk Stout for sale.

International Tap House (403 E. 18th St.) hosts Kegs for a Cause, a Wayside Waifs fundraiser, from 5 to 9 p.m. Fifty-percent of Boulevard Brewing KC Pils draft purchases will be donated to the nonprofit’s efforts to help shelter animals.

Supposedly, love is blind, but is it colorblind? Found out as HopCat (401 Westport Road) dials up Bell’s Brewery seasonals and year-round beers for a beer dinner with a stoplight theme in honor of Valentine’s Day. Wearing green signals that you’re single and ready to mingle, yellow conveys you’re open to some possibilities, and red means you’re taken and here for the beer and food.

Pucker up for trivia at International Tap House and save on discounted pours of Funkwerks Apricot Provincial and Tropic King plus Brooklyn Brewery’s Sorachi Ace and Bel Air on tap.

Lovebirds and craft beer lovers, swoop down to Kansas City Bier Company (310 W. 79th St.) for a four-course Valentine’s Day dinner paired with six beers from KC Bier. Limited to 30 guests, the dinner (starts at 7 p.m.) includes live music from local pianist Joe Defio. Tickets can be purchased at the bar in the Bierhalle or by calling 816-214-8691.

The Taproom at Crane Brewing (6515 Railroad St., Raytown, Missouri) celebrates V-Day with specials on pours of its Amber + Brett 4ever, an American Wild Ale, and ruby-colored Berry Weiss. Celebrate with chocolate-covered strawberries, while supplies last.

Cinder Block Brewery runs its Heart Breaker Cider through a Randall filled with strawberries, oranges and thyme for a fruit-herb infusion.

Kansas City Bier Company celebrates its fourth anniversary from 1 to 5 p.m. with more than 30 beers on tap, including year-round, seasonal, special release and limited-edition beers.

Burg and Barrel (7042 W. 76th St., Overland Park, Kansas) celebrates its fifth anniversary. The burger restaurant and bar has beer and spirit releases and promotions from 1 p.m. to 10 p.m., including a 2 p.m. tapping of Martin City Brewing’s Righteous Candor and Imperial Alchemy.

Who can “prost,” the most this weekend? Recover from Kansas City Bier Company’s fourth anniversary celebration on Saturday with Sunday brunch in the Bierhalle from 11 a.m. to 2 p.m.