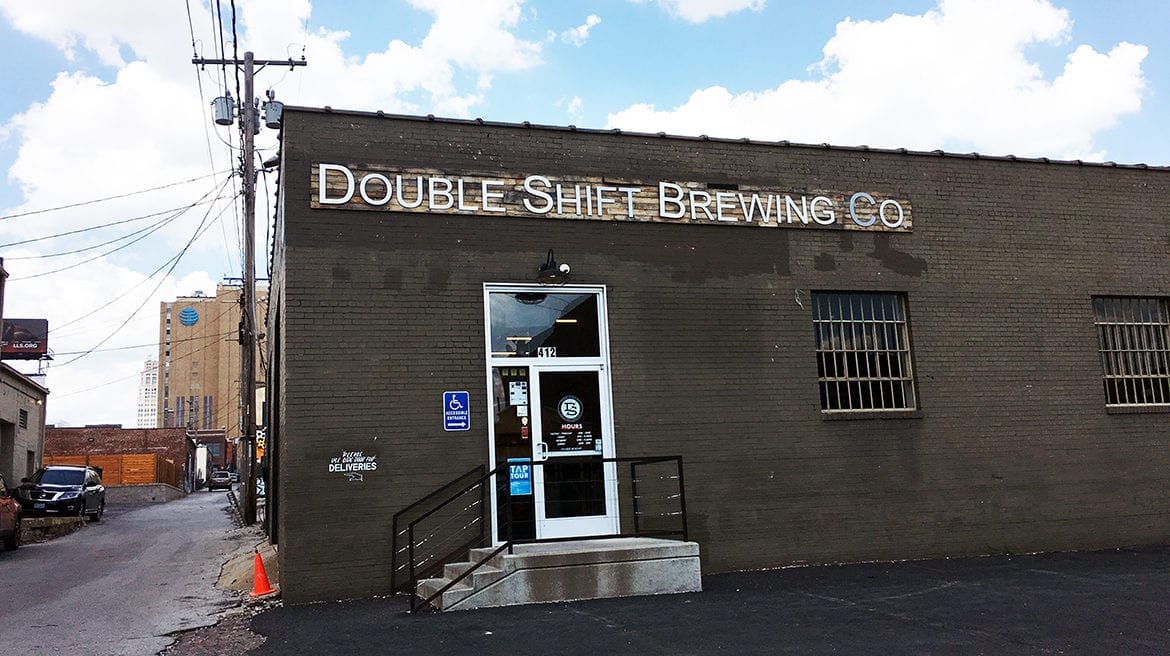 Bryan Stewart pauses in the middle of a story about a beer made with birthday cake to take a delivery early on a weekday afternoon. A farmer from Wellsville, Kansas, is dropping off bags of malt, which he stacks on the wooden tables inside of Double Shift Brewing Company (412 E. 18th St.).

“I want to incorporate more raw ingredients into our beer,” said Stewart, Double Shift’s head brewer and operations manager. “This is about using ingredients to get the terroir of our area.”

Stewart is busy preparing for Double Shift’s third anniversary this Saturday, where Birthday Pirate (made with an actual birthday cake from Mud Pie Bakery) will be among the four draft-only releases.

Stewart took over brewing from founder Aaron Ogilvie before Double Shift’s second anniversary and has been seeking to refine the brewery’s identity over the past 18 months. The beer lineup has shifted dramatically in that time. There is not a single brew from the original cast still served on tap at the Crossroads brewery.

He points to the second anniversary as a turning point for the fledgling brewery.

“I think that’s when people really responded to what we were doing,” Stewart said. “We went away from doing styles for the sake of doing a style, and instead it was weird stuff that shouldn’t make sense but does when you taste it.”

He mentions Blueberry Grind, a recent collaboration with Messenger Coffee that sought to reinvent the idea of a coffee beer. While there was a small amount of coffee — about a pound — in the brew, the beer was actually more about the idea of coffee than big coffee flavor.

“It was about what coffee tastes like and smells like, [in this case] blueberry and lemon zest,” Stewart said. “It was thinking of beer in a different way.”

That idea of moving a few degrees off-center defined the brainstorming process for the latest anniversary, which involved Stewart, Ogilvie, assistant brewer Jon Conway, and Annie Davis, who is building out the brewery’s quality control program.

“Raspberry Coherence is about taking things that you might not think would blend and making them accessible and familiar,” Stewart said.

The raspberry sour (5.1% ABV) is made with lemon zest and rosemary. Quantum Tunnel (6.5% ABV) is a double, dry-hopped passionfruit sour featuring lactose and vanilla.

“It drinks like ice cream,” Stewart said. “We want to do more work with sours and barrel projects, but we are limited by space.”

Double Shift will also have a draft-only version of Tessellation made with guava and grapefruit. Finally, there’s Birthday Pirate (7% ABV), the birthday cake-infused beer made with vanilla and lactose. They’ll also release three variants of Birthday Pirate: fried ice cream, black forest, and tiramisu. The popular River Pirate is the base beer, although Stewart dialed back the hops, and added cocoa nibs and vanilla for this iteration. 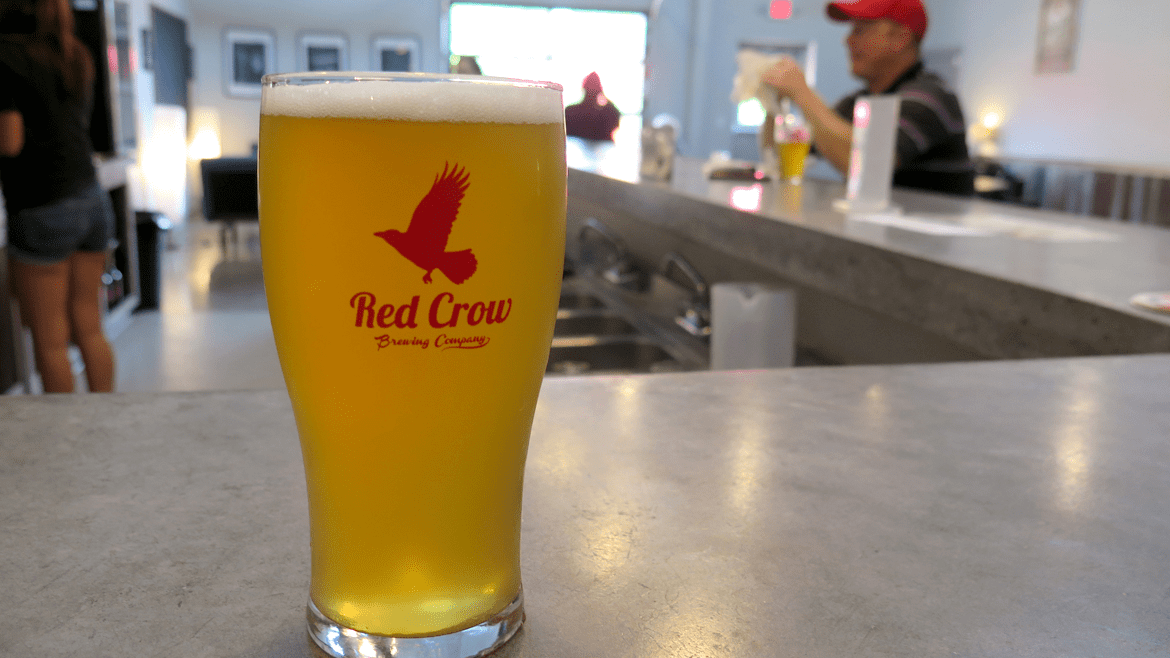 Red Crow Brewing Company has found a home. The brewery, which opened in Spring Hill, Kansas, in 2015, has spent six months looking for a new location. After initially considering renovating a former Outback Steakhouse, Red Crow found a space at 1062 W. Santa Fe, Olathe, Kansas. The new spot, a former auto repair shop, affords more space for seating and the brewhouse, and a pair of patios. The brewery also intends to add wine and hard cider to its offerings.

Callsign Brewing (1447 Gentry St.) is open in North Kansas City. Callsign will be open from 4 to 9 p.m. Thursday and Friday, and noon to 10 p.m. Saturday. The brewery will expand its hours in August.

Tap List | Callsign Brewing Close to Opening in North Kansas CitySteve Sirois was pouring his homebrew at a festival in Zona Rosa when he realized the impact he could have with a conversation over a beer. "Our beers are named after fallen aircraft, and we had one of the widows…

The Boulevard Tours and Rec Center is temporarily closed for a plumbing issue. But you can still get a beer in the interim at the original tap room (2501 Southwest Blvd.).

Burgers. Brats. Beer. Crane Brewing Co. (6515 Railroad St., Raytown, Missouri) hosts Stephanie Wilson, owner of Slabs.com who will be competing on The Food Network’s “Chopped Grill Masters” later this month, for a burger and bratwurst pop-up from 5 to 7:30 p.m.

East Forty Brewing (1201 W. Main St., Blue Springs, Missouri) has begun to host live musical acts. The brewery opens at 4 p.m. Aaron Kamm and the One Drops take the stage around 7 p.m. There is an $8 cover. They’ve also got beer cocktails on tap like the Missouri Sunrise made with J. Rieger & Co gin, pineapple syrup, lemon, lime, and the brewery’s Sunrise Saison.

Stockyards Brewing Company (1600 Genessee St., Suite 100) is hosting its second annual benefit for Children’s Mercy Hospital’s art therapy program from 7 to 11 p.m. As part of the celebration, they’ll have a limited amount of beer glasses designed by Scribe for sale and they’re collecting art supplies as well as cash donations.

Torn Label (1708 Campbell St.) celebrates the third anniversary of its taproom at noon. They’re going to release Shake Hands With Danger, an Imperial brown ale made with toasted coconut and Thou Mayest coffee.

Double Shift will celebrate its third anniversary from noon to 11:30 p.m. The Crossroads brewery will be releasing a trio of anniversary brews, including Birthday Pirate (made with actual birthday cake).

Paw Paw’s Got a Brand New Bag, the latest Brewhouse One series, will go on sale to the public on Sunday, July 22, at 10 a.m. in the Boulevard Brewing Company’s gift shop. The sour wheat wine, brewed with paw paws, is in 750-ml bottles. Check Facebook to make sure the brewery’s gift shop is open by then or for updated release information.

Border Brewing Co. (406 E. 18th St.) wants you to bring your dog to its patio for Dog Days. Beer Paws and Unleashed Pet Rescue will be on hand from 1 to 4 p.m. You can buy spent grain dog biscuits or even adopt a puppy.