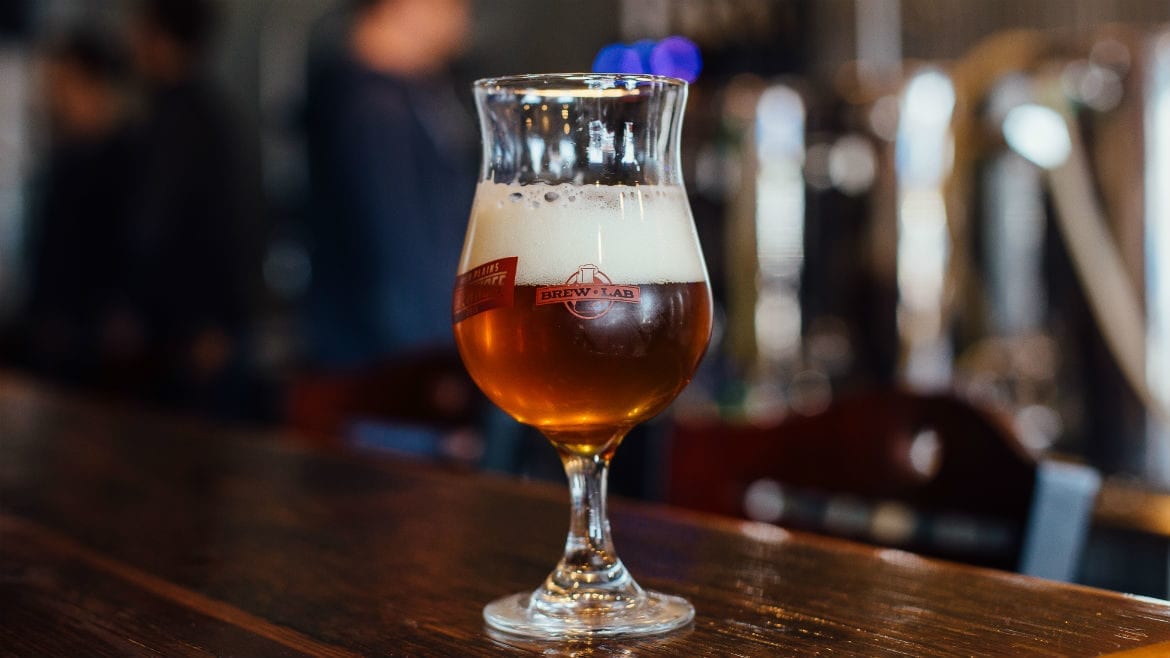 Brew Lab has a trio of new beers, including an imperial brown ale aged in wine barrels. (Zach Bauman I The Pitch)
Share this story

Clay Johnston, Justin Waters, Kevin Combs and Matthew Hornung co-founded Brew Lab in 2013 at 8004 Foster St. Homebrewers could shop for supplies and also use Brew Lab’s equipment to brew beer in the shop. Last year, the owners began building out a larger space near the Overland Park Farmers’ Market to add a brewery and restaurant into the area.

“We’ll have many guest taps, as well, while we get up to our capacity,” Johnston said.

The restaurant will feature small plates. The “American tapas,” menu will have meatloaf sliders, Buffalo cauliflower, Sriracha shrimp, and chicken and waffles. The new space will also have a Saturday brunch to coincide with the adjacent farmers’ market.

After some construction delays, Johnston and his business partners “are excited to finally put all the pieces together.”

“The original Brew Lab was such a quick success, but it was missing the space and amenities to really make the experience what we knew it could be,” Johnston said. “[Here] our customers will literally be brewing alongside us and be part of the process.”

Marsha Flowers, a candlemaker for more than two decades, and Carrie Atkins launched Barley & Hops Craft Scents candle line, after being inspired by the aromas of craft beer.

Flowers and Atkins visit craft breweries to taste, smell and talk beer. Then they hone in on the key flavors and aromas of craft beer, such as hazelnut, malt, chocolate, espresso, hops and fruit, and replicate them in candle form. The candle labels mirror the craft beer artwork found on the brewery’s cans, bottles and tap handles.

The original version, released more than a year ago, was a taproom-only offering in Torn Label’s Rough Draught Series. This year, High Tai will be on tap at the brewery (1708 Campbell St.). Also, Torn Label will release four-packs of 12-oz. High Tai cans, beginning at 5 p.m. on June 15 at the brewery, with limited distribution to follow.

Boulevard’s Requiem for a Pancake is a new spin on breakfast. (Pete Dulin | Flatland)

Boulevard Brewing releases its Foeder Project #2 in 750-ml. bottles throughout Greater Kansas City. To age this beer, the brewery acquired its foeder, a giant barrel used for wine storage, from a California winery. This Flanders-style red has flavors of tart peach/apricot, notes of under-ripe berries and rhubarb, and bracing acidity with a zippy finish.

The Foundry (424 Westport Road) taps beers from The Bruery, based in Placentia, California. The Bruery staff will be on hand to chat about their beers. Full and half-pour sizes of the following beers will be available: So Happens It’s Tuesday, Lokal Red, Mischief, Frederik H., Frucht Mango, and Sans Pagaie.

Spin Pizza (4950 Main St.) offers a Thursday sampling of Martin City Brewing Company beers from 5 to 7 p.m. with a brewery rep in attendance to answer questions.

Pinstripes (13500 Nall Ave., Overland Park, Kansas) and Crane Brewing host a four-course beer pairing dinner ($50). An expert from the brewery and the chef will lead guests through an interactive dinner and discussion about the Crane Brewing beer pairings.

Boulevard Tours and Rec Center (2534 Madison Ave.) is your source for free bingo, $3 maple bacon donuts, and 5-oz. pours of Requiem for a Pancake in the Beer Hall.