The potential of a bean, of a business 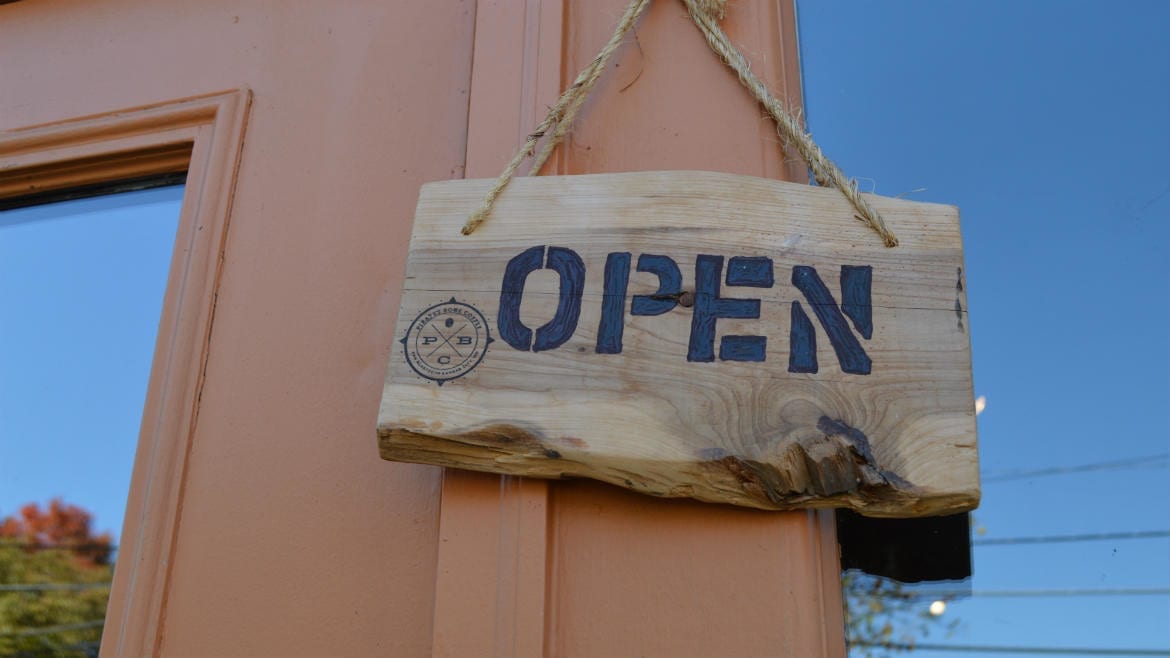 You could call the space at 645 E 59th Street a business percolator. It’s here, a few doors down from Chai Shai, in the low-slung Brookside strip center with echoes of a Swiss chalet, that Pirate’s Bone Coffee and Café Noble, a pair of fledgling businesses, are looking to find their sea legs.

On a recent Tuesday morning, two men sit sipping coffee beneath a model of a pirate ship in the former hair salon space. A few feet away is a tiled counter with a red Gene Café roaster — this is the headquarters of Café Noble, the independent roasting operation that opened inside of Pirate’s Bone this August. Owner Chase Scroggins, 25, perches on a stool, tallying receipts and slurping his latest roast for a cupping, a roaster’s equivalent to wine tasting.

“We’ve had a lot of people tell us the shop has a San Francisco or Brooklyn vibe. I don’t even know exactly what that means,” said Scroggins, pausing to put it into words. “I guess that means a small, intimate environment. I guess people feel comfortable here, they sit down at the bar and we have a conversation. It should be interesting in here over the course of the next year with the election coming up.”

The past year has certainly been interesting for Scroggins. A former consultant for Cerner, he made the decision to leave his job this spring and turn his passion for coffee into his profession. He approached Zaid Consuegra, the owner of Pirate’s Bone, and five minutes into their first conversation asked if Consuegra would let him roast inside the shop.

“I saw a lot of potential in him and his company. So, I threw the dice and took a chance on Chase,” said Consuegra who opened Pirate’s Bone this January. “He’s learning really fast how to roast and I’m impressed.”

Consuegra may have been the perfect guy to pitch. The former owner of Happy X in Lenexa – a coffee shop that shared a space with a restaurant – he is a big believer in sharing risk and finding inspiration through collaboration.

“If I don’t have to do it myself, why should I?” said Consuegra, who opened Pirate’s Bone on a $2,000 budget in January.

Scroggins purchased a roaster in June and opened Café Noble two months later. The name was a play off of a pirate’s character and an homage to Chase’s grandfather.

“The roaster is a hybrid of an air roaster and drum roaster. You have this little bit of brightness that will show up [with an air roaster] and the body that starts to develop with the drum roasting process,” said Scroggins.

He roasts a pound a time and believes that is one of his key competitive advantages. He can offer beans that have often been roasted within 24 hours of a delivery to a given client. Café Noble’s coffee is currently at Nature’s Own, Bad Seed Farmers’ Market, and the Westport Coffee House.

“It can feel like Sisyphus. You can become discouraged when you look at a company like PT’s Coffee dumping in 150-pound bags into a roaster and I’m roasting a pound-and-a-half,” said Scroggins. “You just have to remind yourself that they started somewhere.”

“You can become discouraged when you look at a company like PT’s Coffee dumping in 150-pound bags into a roaster and I’m roasting a pound-and-a-half. You just have to remind yourself that they started somewhere.” Chase Scroggins, owner of Cafe Noble. (Photo: Jonathan Bender | Recommended Daily)

When Consuegra first opened, he was pan-roasting coffee a half-pound at a time. Each batch would take 30 minutes and he’d need 10 pounds at a go for the shop. The math never worked. The arrival of Café Noble has allowed Consuegra to focus on drink development. Each new menu item spends a month being tested before being added to the blackboard behind the barista bar that is designed to look like a periodic table of coffee.

In the past nine months, Consuegra has created a dirty horchata with brown rice, cinnamon, organic raw cane sugar, vanilla extract, and a shot of espresso that is served over ice cubes made of coffee. He’s also got a sweet misery latte (foam, milk, espresso red chili and white chocolate) and his answer to the pumpkin drinks that dominate fall: Mexican cold brew.

“I hate pumpkin so I wanted to do something else,” explained Consuegra. “It can be hot or cold and it’s a really well-balanced drink. It’s cinnamon and raw cane sugar. It’s just all about the ratios.”

An independent roaster inside of an independent coffee shop is a unique arrangement, but the two sides of the coffee business have been working in harmony. Consuegra gets beans at a lower price and Scroggins has someone to share the rent.

“There are a lot of people that are good roasters and established, but I think the smaller guys can still have really good stuff. To borrow a bit from Zaid, there’s a pie and we can make our own little slice of it,” said Scroggins.

While Scroggins attempts to grow the size of his slice – he’s currently working as a host at a restaurant to help supplement the business – Consuegra is pushing him to look at a greater variety of single origin beans. Café Noble currently has coffee from Guatamala, Colombia, and Ethiopia. Scroggins roasts throughout the week, making notes on roast time and the flavor profiles of sample bags that he receives from distributors.

“When I’m cupping coffee, I don’t focus on whether the individual roast is perfect,” said Scroggins. “But I look at what is the potential in that coffee.”