A Matter of Taste: Why Congress May Back Off New School Lunch Standards 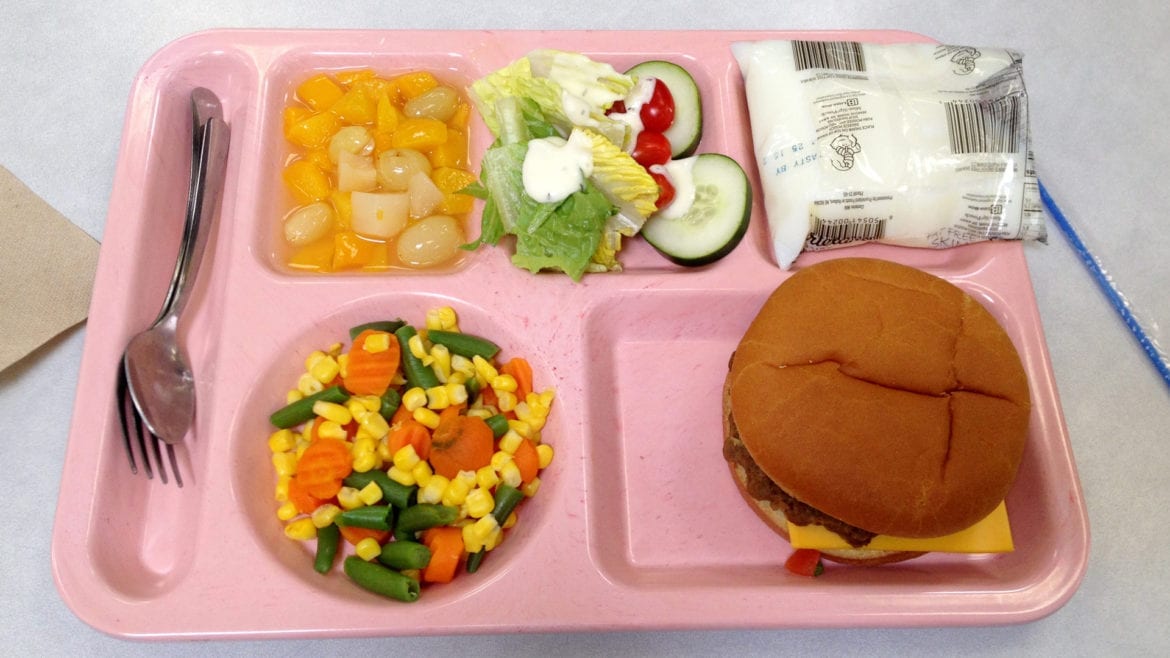 Schools across the U.S. served more than 5 billion meals in the national school lunch program to millions of students last year. Each one of the meals has to meet federal rules for nutrition. Now, those rules are up for debate and Congress could impose changes on the cafeteria.

At Norris High School, part of a rural district near Lincoln, Nebraska, it’s easy to see the results. At a recent lunch, district Superintendent John Skretta took me straight to the salad bar.

On my pink tray, I ended up with a southwest burger topped with fresh pico de gallo on a whole wheat bun, no cheese. I took a scoop of mixed corn, carrots and green beans. Next to that was a serving of fruit cocktail and a fresh salad. No french fries; no sloppy joe.

The focus is on fresh, low-fat ingredients, and not too much of them. It’s not fine dining, but satisfying.

The nutrition rules are forcing schools to teach kids how to eat healthier, Skretta says, and they don’t have to go hungry.

“There’s essentially an all you can eat fruit and vegetable bar and that’s promoting the right calories because school-aged children consume about half of their daily calories in school,” Skretta said.

Nationwide, school cafeterias have undergone similar transformations. But the new lunches don’t get five-stars from everyone. Some students miss their old staples and have ditched the fancy new lunch. Some kids made videos mocking the changes, and there were some reports that more food was being thrown away. 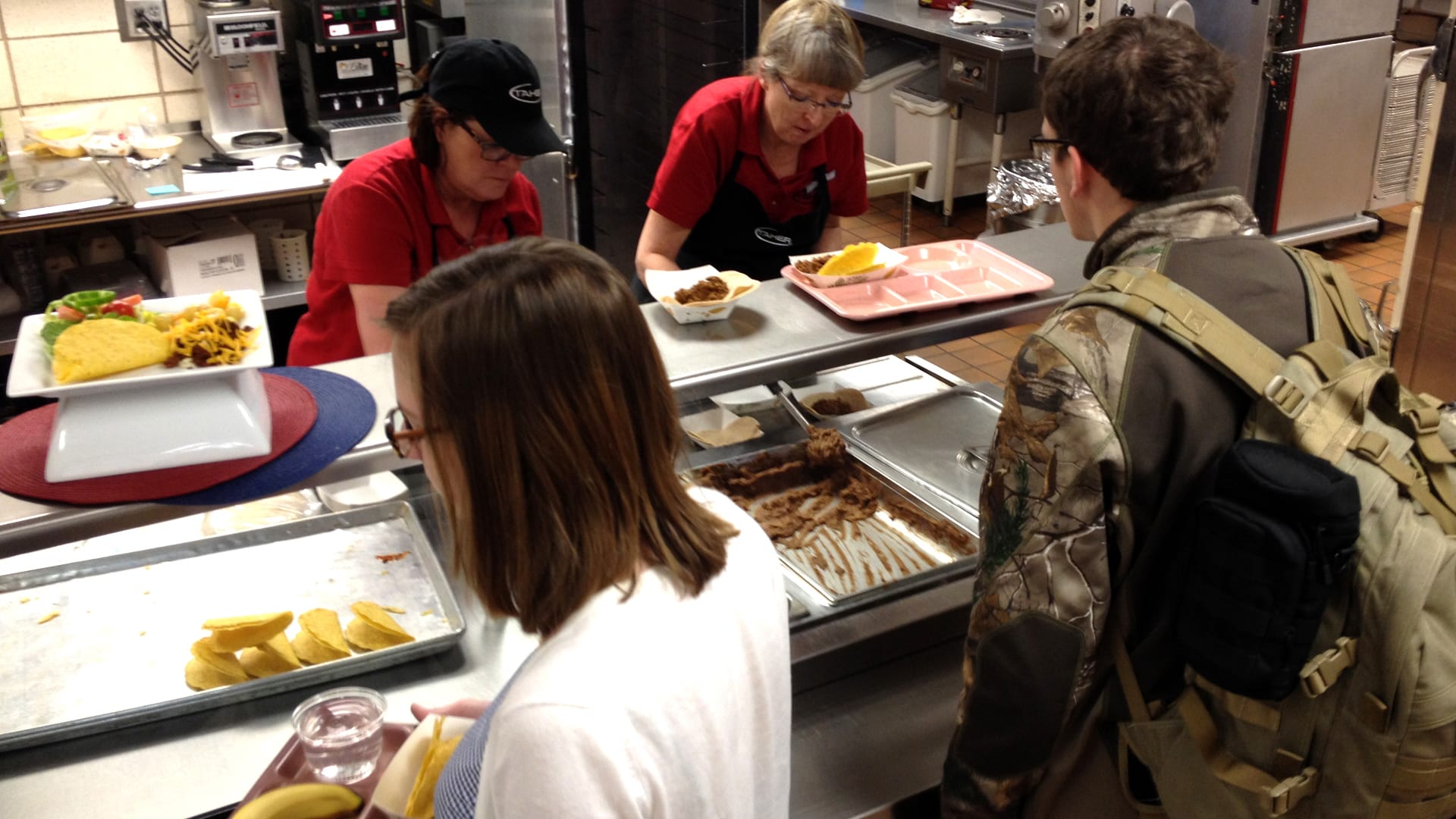 Despite any backlash, almost all schools have made the changes and studies show kids are eating better. But some schools have seen a drop in the number of kids buying school lunch, especially kids who pay full price.

“It’s counterproductive if kids are deciding to not even participate in the school lunch program altogether,” said Diane Pratt-Heavner, a spokesperson for the School Nutrition Association, which represents school food programs.

Some of the kids that decline school lunches bring their own lunch or grab fast food. They may end up eating a less nutritious meal and the school loses money from their food budget.

The SNA wants more flexibility in the nutrition rules to keep more kids buying lunch. It appears lawmakers are listening. School lunch standards are up for reauthorization in Congress. Both the House and Senate have plans that would scale back the standards, but they would do it in different ways.

Take sodium, for example. The Senate bill, which has been approved by the Agriculture Committee but not the full Senate, would reduce sodium limits, but do it more gradually. The House’s legislation, which is also still in committee, would stop any further sodium restrictions indefinitely. SNA’s Pratt-Heavner is glad to see lawmakers are willing to adjust.

“We’re concerned about schools’ ability to meet those sodium limits and still be able to provide students an appealing, tasty meal,” Pratt-Heavner said.

Nutrition advocate Margo Wootan of the Center for Science in the Public interest says students started leaving the school lunch program before the nutrition changes became official in 2012. Regardless, she says it is important to follow through with sodium reductions even if schools need more time to comply.

The Centers for Disease Control say 9 out of 10 kids have too much sodium in their diets. Too much sodium can raise blood pressure and increase the risk of heart disease later in life.

Wootan says the current sodium standard of about 1,400 mg for a high school lunch still gives kids more than half of what’s recommended for the entire day. The next reduction mandated by the 2010 school lunch law would put a limit on sodium at about 1,000 mg.

“The next level of sodium reduction for the school meal programs is not to super-low levels,” Wootan said. “It’s just to less super-high levels.”

Schools, however, can only do so much. They’re competing with the flavors of food students eat outside of school.

Mel Maendele, the food service director at Norris Schools, says school lunch participation has been stable in her district. Students have adjusted easily to eating more vegetables and whole grains. But low sodium is a hard sell.

“Unfortunately, the thing that makes an impact on that is what we’re doing at home,” Maendele said. “So until the industry can catch up and get the at-home food that people buy to be on the same wavelength, then I think that’s going to be a challenge.”

In addition to sodium, both school lunch bills would back off on whole grain requirements. The House would also let kids buy another entrée if they want, and it would increase reimbursement to schools for meals they serve by using savings from reducing the number of low-income schools that receive funding to serve free lunch to all students.

It may be a while before there are any changes. Neither the House nor Senate has voted on their version of the bill yet and Congress doesn’t have to do anything. Absent new legislation, current standards will carry on.

While schools want to know exactly what the rules are for next fall’s lunch menus, nutrition advocates say they’d rather stick with a leftover law than end up with something that carves up the current standards.