The best lineup since sliced bread

We envision a world where the World Championship Royals are sandwiches. You're welcome. 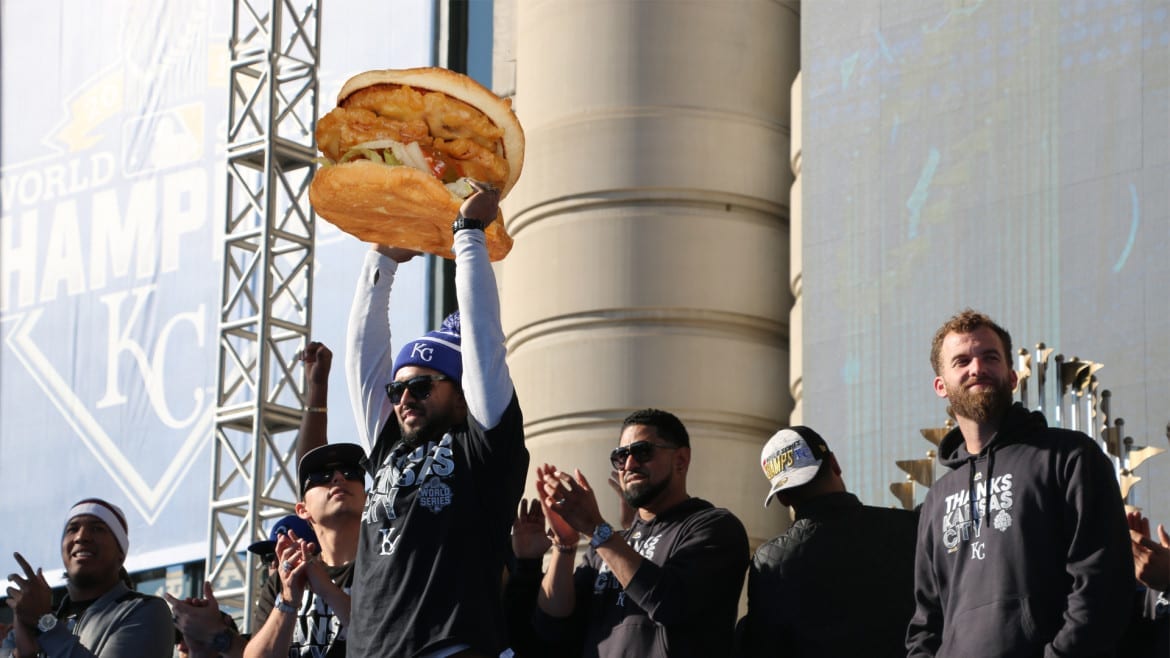 Christian Colon does the heavy lifting as we serve up the Kansas City Royals, sandwich-style. (Photo and photo illustration: Cole Blaise | Flatland)
Share this story

You know you’ve made it in a town when a restaurant names a dish after you. Sports radio host Mike Zarrick has the Z-man at Joe’s Kansas City, and sportswriter Joe Posnanski has chicken spiedini at Governor Stumpy’s. Murray’s Ice Cream & Cookies paid homage a few years ago to the late Walt Bodine with ‘Malt Bodine.’ But Zarrick and Posnanski no longer reside in Kansas City, so I thought it was time that we started paying homage to some of the celebrities in town… in sandwich form.

And there may be no better place to start than the Kansas City Royals, who deserve a little hero worship (that’s worship in the form of delicious, delicious heroes). Empanada Madness has gotten the ball rolling. They’ve got the Perez #13 — a trio of arepas (a traditional Venezuelan flatbread that’s filled or topped with meat, cheese, plantains or beans). Since KC is woefully short on delis, I’ll do the heavy lifting and assemble the hoagies that resemble this town’s newest heroes. So here’s your starting sandwich lineup in honor of the 2015 World Series Champion Kansas City Royals.

It’s the number one on most menus (even though his jersey is #2) – the thing you’d order without a second thought because you can’t wait for that next item to come up on your phone or menu board. A 1/3-pound of a burger, an unconventional size that is surprisingly effective on hunger like the decision to bat Alcides Escobar first, dusted with barbecue rub (we’d call it magic spice in honor of his defense). In the center of the patty, we’d sneak a bit of queso fresco a la the Juicy Lucy. And you get a double helping of tots on the side because The Eskie makes sure the whole table gets involved.

You could name the Taco Bell crunchwrap after him, but the man who helped you #stealabreakfast is worthy of something more than a dollar and change. In this case, a steak sandwich made with 29-day, dry-aged prime rib because some of the best things in life just need a bit more time before the major leagues. The first 28 days are about tenderizing the steak, the last day is just that bit of extra flavor. The open-faced sandwich comes with a cup of salty au jus and spicy horseradish sauce because this sandwich is determined to cover all of your tastebuds. It’s delivered to you by a server on roller skates as no ordinary mortal is fast enough to keep up with the Lorenzo Cain Experience.

Here, we’re going to rename an existing sandwich because we’ve got to start building some food traditions, people. Instead of asking for the #1 Hot (the Napolitano) at Carollo Gourmet Grocery & Deli in the City Market, we should be asking for the Hotsmer. It’s capicola, salami, prosciutto, provolone, and hot peppers. It’s got heat out of the gate that fades just enough, like ‘The Hos’ hairdo, to get you ready for the next bite.

This town could use more Cuban sandwiches and hitters that leave the ballpark with regularity. Also, we got a great supply of pork and chefs who know what to do it. The Kendrys would be a classic: thinly sliced baked ham and roast pork, Swiss cheese, dill pickles and yellow mustard on buttered Cuban bread that is toasted in a plancha (sandwich press). Simple and fulfilling, this will Destroy Hunger.

It’s been three years since Alex Gordon ate a cheeseburger, so you’ll find no cheese or bacon in this ironically named sandwich. His fanatical devotion to grilled chicken and steamed vegetables lends itself to a take on a banh mi. Think grilled chicken topped with spicy hoisin sauce, pickled daikon, carrots, and shallots and an optional slice of the other white meat: peppery pork tenderloin. While it could be served on the traditional baguette, we could also see ordering it “Gordo-style,” in lettuce cups.

This one is based on a three-year-old’s nickname for his favorite player and is not a commentary on someone’s physical appearance. The Stocky would be a big, old ice cream sandwich modeled after Moose Tracks. You’d have a double chocolate fudge cookie on top, a peanut butter cookie on bottom, and a fudge and peanut butter-laced vanilla bean ice cream in the center. These would be available for late night delivery.

An egg fried over high, hard heat, bacon with a big pepper bite, and a lot of serious cheese on the corners of sourdough toast. The sourdough is an homage to the tears and lamentations of your enemies. The Wadinator is never the wrong choice and it’s always available because breakfast is served all day. This sandwich is here to do one thing and one thing alone: make you finish each and every meal.