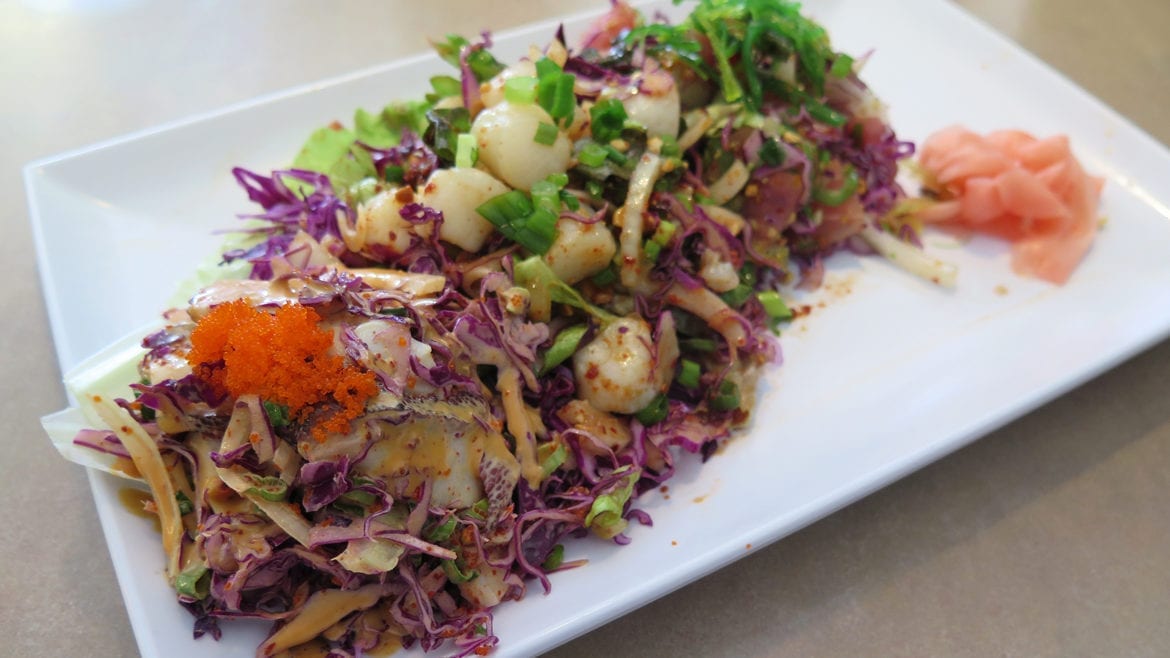 The poke trio at Bistro 913. (Photo: Pete Dulin I Flatland).
Share this story

First-time restaurant owner Steven Nguyen, who opened Bistro 913 in April, says he learned most of what he knows about Hawaiian cuisine and restaurant operations from his mother. Certainly, she’s one to study.

Nguyen, son of a Vietnamese mother and French father, was born in Vietnam and grew up in Hawaii, where his mother, Judy Sakuma, has owned and operated Ono Seafood in Honolulu, Oahu, Hawaii, for 22 years.

The 600-square-foot restaurant has consistently earned recognition for serving the best poke (pronounced “po-kay” or sometimes “po-kee”) in Hawaii. Ono ranked fifth on Yelp.com among the top 100 places to eat poke in the U.S. To this day, it astounds Nguyen that his mother has earned such notoriety and gained a following across the islands for the dish.

“She tells me, ‘I feed the island,’” says Nguyen. “‘People come across across the island just to eat poke.’”

Poke is a traditional raw fish salad typically served as an appetizer most often associated with Hawaii. Variations are also found in other seafood-oriented cultures such as Japan. The word in Hawaiian means “to cut crosswise into pieces” and has evolved to also refer to a “chunk.” The home version of the dish in Hawaii is comprised of sliced, bite-size chunks of fish such as aku, an oily tuna, bonefish, he’e, the Hawaiian term for octopus, or seafood leftover from a catch.

“I spent eight months working with my mom to [learn] how to make poke,” says Nguyen. “She let me use her recipes.”

Both Hawaiian and Vietnamese cuisine is served at Bistro 913 (7702 W. Shawnee Mission Parkway, Overland Park, Kansas). The menu isn’t a fusion of the two cultures’ foods. Nguyen oversees preparation of the Hawaiian dishes while a veteran chef focuses on the Vietnamese menu.

The Overland Park restaurant offers poke as an appetizer or an entree with rice. With the appetizer, a trio of seafood may be chosen from ahi tuna (yellowfin), shrimp, scallops, salmon, or octopus. Next, a variety of flavors may be mixed and matched with each type of seafood, including California-style spicy avocado, Hawaiian-style (seasoned Hawaiian rock salt, chili pepper flakes, sesame seed oil, seaweed, and green onions); spicy Korean, miso-style, shoyu-based sweet sauce with chili flakes, and sriracha-laced chili sauce.

The trio poke appetizer is large enough for two people to share. The dressed seafood is assembled atop a colorful bed of purple cabbage and lettuce. It’s light and filling, savory and spicy, all at once. With the entree, only one type of seafood and seasoning may be chosen, and it is served with steamed rice, steamed vegetables, side salad, and dressing. 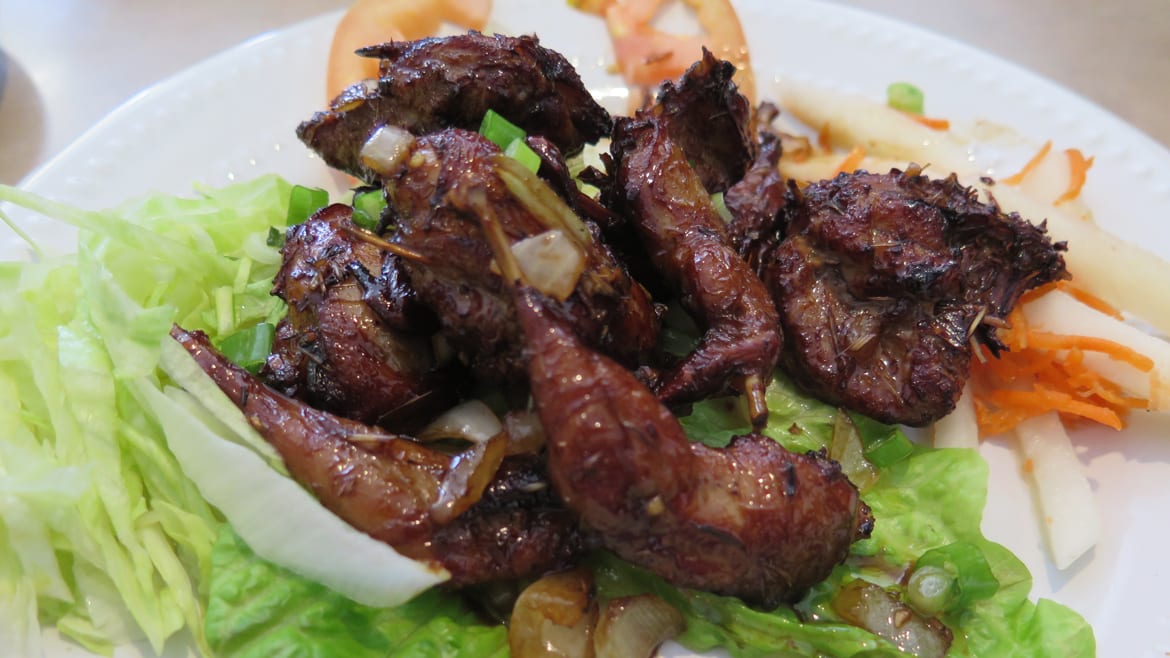 Besides Hawaiian-influenced dishes such as the delectable roast pork sliders on sweet buns, Bistro 913’s menu also includes an extensive array of Vietnamese dishes worth exploring. Sliced beef short ribs are prepared Korean-style with kim chee. Chim cut is a finger food appetizer of fried quail on a bed of lettuce, pickled carrots and daikon. While the tiny bones are pesky, the tender meat is full of flavor. Banh tom chien, deep-fried sweet potatoes and shrimp with a side of house fish sauce, is a refreshing alternative to spring rolls. The Vietnamese lettuce wrap serves seasoned ground pork and colorful puffy fried shrimp chips with a side platter of iceberg lettuce leaves, dipping sauce, and rice.

Of course, Bistro 913 also serves numerous options for pho, stir-fried noodles, vermicelli, rice dishes, and banh mi. For something different, order a salty lemonade on a hot day. The strangely satisfying salty-citrus flavors bring to mind Gatorade or the salty juice leftover from a bowl of watermelon.

Nguyen’s earnest facial expressions and clenched fists held close to his heart convey the intensity of his unbridled enthusiasm and passion for serving authentic cuisine, offering good value, and focus on hospitality – characteristics that he learned from his mother rather than culinary school.

Local diners are unlikely to find a pure old-school version of Hawaiian poke – dressed with salt and condiments like limu, or varieties of native edible seaweed, and roasted kukui nuts. Even so, it doesn’t take a flight to the islands to order a contemporary version and savor a bite.