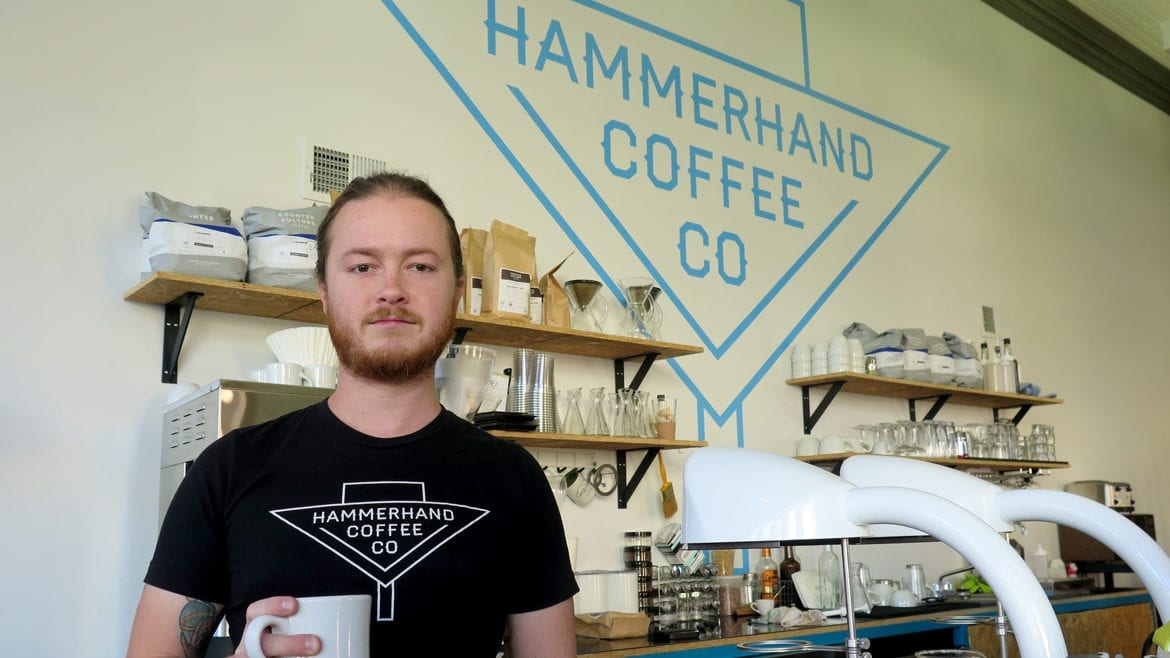 Alex Merrell is looking to get the coffee scene dialed in to Hammerhand Coffee in Liberty. (Photo: Pete Dulin I Flatland)
Share this story

Alex Merrell, co-owner of Hammerhand Coffee, didn’t originally plan on opening on a corner spot (22 N. Main Street) in downtown Liberty’s historic square. Merrell and three investors had selected a space at 1 N. Water Street, based one block east and south around the corner of the Clay County Courthouse. But earlier this year, the roof collapsed in that building and the team at Hammerhand needed a new way forward. Merrell and his partners secured their current spot as a temporary base — think of it as an extended pop-up — until the original location is rebuilt and ready for occupancy.

Hammerhand Coffee opened just under two months ago in a former Tiffany lamp store that operated in the space for 25 years. The space has a subtle Nordic design influence – clean lines, airy, low-key color scheme. White and robin-egg blue tiles line the face of the front counter. Chairs in a matching blue hue and maple-colored tabletops echo the palette. A series of tall windows are portals to sunlight.

The coffee shop’s name is a play on two references. For Merrell, it’s a nod to an obscure “Lord of the Rings” character, as well as John Henry, the legendary steel-driving man with a hammer in his hand. Rather than roast its own coffee beans, Hammerhand Coffee uses Counter Culture, a cutting-edge coffee roaster and industry educator based in Durham, North Carolina.

“Counter Culture is a pioneer in direct fair trade. I’d rather not use any other beans. They are excellent,” said Merrell. “I don’t want to roast my own beans until I can roast and do the same quality.”

Counter Culture works closely with farmers on sustainable processes and pays those farmers for quality improvements to their operations. U.S. coffee shops like Hammerhand can buy small experimental lots of roasted coffee beans from those farms which are given credit on the packaging as the source.

A single coffee option from Post Coffee, based in Lee’s Summit, is also available.

“They’re doing a good job. They helped me when the building collapsed,” said Merrell. 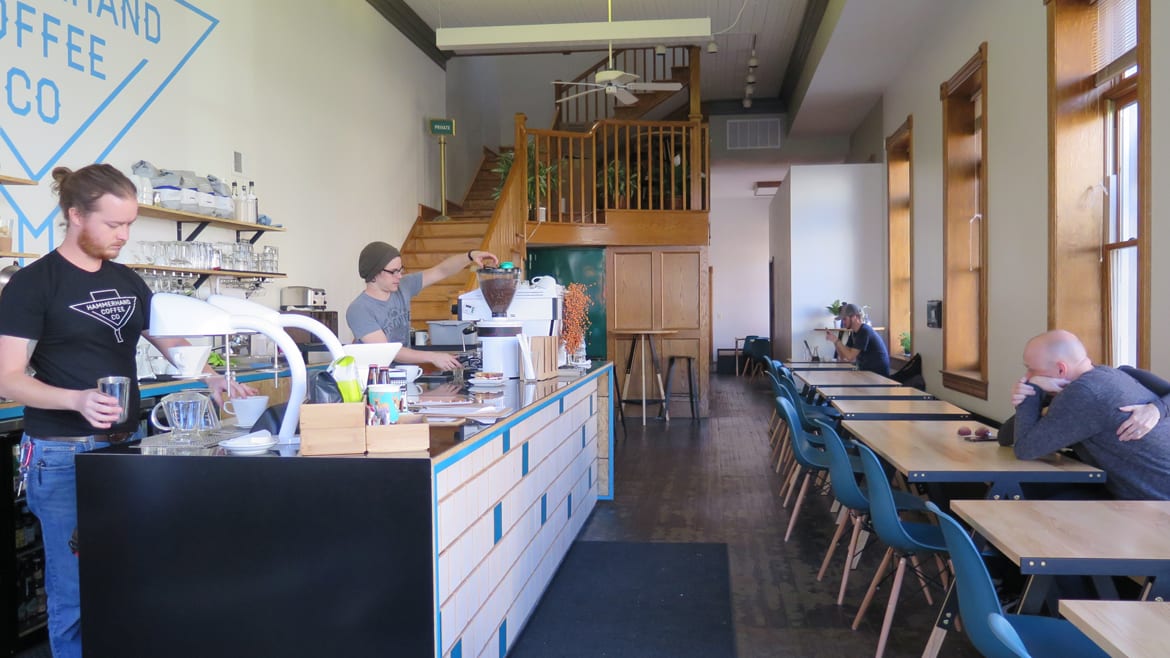 Merrell learned to become a barista at Ultimo Coffee in Philadelphia, where he lived with his wife. He envisioned opening his own shop one day. When the couple moved to Kansas City with their first child to be near family, Merrell began putting together a business plan. He wanted to open a shop in Liberty’s square and found like-minded investors.

“We wanted a coffee shop in downtown Liberty as a third place for people to be between home and work,” said Merrell.

Hammerhand uses Seraphim, an automatic pour-over system that can be pre-set to Merrell’s specifications, to enable better service and consistent quality with coffee service. Multiple cups of coffee can be brewed with no variance.

“It allows us to brew like pour-over,” said Merrell. “It is helpful when we’re busy to be able to make coffee the same each time. It also frees us up to interact and talk to customers.”

The espresso machine has scales built into the drain pan that allow a programmable brew ratio of coffee grounds to water. Again, the idea is to replicate the same conditions for consistent quality and efficiency.

“There’s still artistic value to the taste when we dial in on a recipe,” said Merrell. “The machine just repeats it each time. It’s automated. I think that’s where the industry is going.”

Not all aspects of the coffee service are automated. Hammerhand makes its own syrups by hand, including vanilla, mocha, and seasonal flavors such as spice caramel for fall and peppermint for winter. Hammerhand also serves light sandwiches and salads, tea from fellow Liberty business Anna Marie’s Teas, baked goods from Sasha’s Baking Company, and Boulevard Brewing Company’s beer.

— Pete Dulin writes about food trends for Flatland and is the author of the “KC Ale Trail.” Follow @FlatlandKC on Twitter  for more food news and trends.