The Field of Dreams and Wine

KC Wine Co. prepares for its grand opening this Saturday 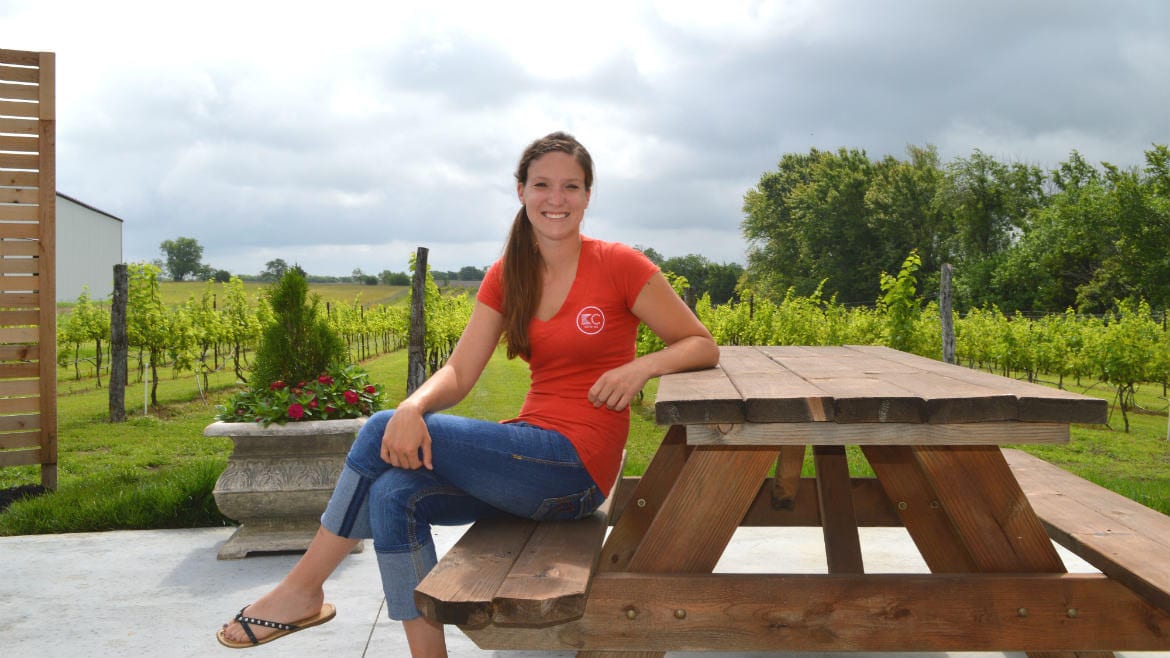 The Berggren family just wanted a new home for their pumpkin patch. Logistics Park Kansas City and the BSNF intermodal were set to come online in Edgerton, Kansas, two years ago and the KC Pumpkin Patch was going to lose its lease in neighboring Gardner.

“My folks have always wanted to run the pumpkin patch,” Taylor Berggren says. “We were a military family, so I never knew where we would go next. But no matter where we were, my mom would take us to pumpkin patches every fall.”

In 2013, the Berggrens found a 7-acre piece of property in Olathe with a pond and tall grasses. It was charming and rustic. There were tractors parked in a Quonset hut off the driveway and a surprise in the backfields – 5 acres of wine grapes.

“I remember I got a text from my wife [Julie] first that says we got a winery,” Kirk Berggren, who was traveling on business in China at the time, says. “Then I called back and I was speechless.”

The Berggrens made the decision to take a year off from the pumpkin patch – it will reopen this October – in order to get the winery up and running. Kirk and Julie Berggren are the backers, while their daughter Taylor, 24, is in charge of the day-to-day operations. This Saturday marks the grand opening of the KC Wine Co.

The mailbox at 13875 South Gardner Road hints at the future for the vineyard – it’s made of one of the few wine barrels on the property. A few feet further in is a rust red Ford with a hand-painted sign with the winery’s address. Only five miles from downtown Olathe, even GPS needs a little help some times.

The main building – a Quonset hut with salmon pink metal that had been used to house tractors – was radically transformed between last August and this January. The salmon pink metal is now clad in oak planks and stamped with the KC Wine Co.’s logo – designed by Sullivan Higdon & Sink (the Kansas City branding firm that helped the Shatto Milk Company develop a strong local identity). A window above the bar in the tasting room and retail space lets light spill onto the newly sealed floors, which still intentionally bare the faint oil spots of once parked tractors.

“There’s nothing like this in Kansas City,” Taylor Berggren says, gesturing to the trio of chandeliers that hang above the tasting room. “I hope people are amazed and appreciate the hard work we put in. Oh, and our wine is pretty good too.”

Under the guidance of vintner Austin Wahaus – a former vineyard manager with the Somerset Ridge Vineyard and Winery — KC Wine Co. has been bottling 300 gallons a day, roughly 1,100 bottles, to prepare for the grand opening. Each of the bottles is hand-filled and labeled. Some of that is out of necessity. When they tap their 300-gallon stainless steel tanks, they need to be emptied before the oxygen in the air has a chance to get to the wine. In the coming year, Berggren hopes to add a 1,000-gallon tank, which would allow for on-demand filling or short bottling runs.

“With our name being KC Wine Co., we’re geared toward Kansas City love. We also want to bring people back to the farm,” Berggren says.

To that end, the Seyval grape vines are just steps from the concrete patio that the Berggren family poured.

“We worked all summer to get bird netting over everything in the final stages. We saw a big increase in production. It keeps all kinds of animals out,” Berggren says. She glances down at her two-year-old chocolate Labrador. “But it’s not dog proof. Charli will still try and get up in the vines, but she’s just a puppy.”

There are three separate plots of wine on the property with plants that stretch back seven years. The vineyards, which are now orderly blossoming rows, had been mowed over by an overwhelmed previous owner. Because of the property’s history, the Berggrens were able to begin producing wine last year.

They’ll eventually have four white and six red wines available for tasting and purchase since they operate as a farm winery. Under Kansas law, they’ll also be able to recork a bottle if someone only wants a single glass before taking the rest home.

“The Seyval Blanc is our driest white. I love that you can go right there and pick them,” Berggren says, looking out through the garage doors at the back of the former Quonset hut. “Riesling is going to be one of the most popular wines. It has the sweet element, but also the dry. I think it’s just so versatile.”

On Saturday, KC Wine Co. will also be featuring its Norton and Chambourcin – a rich, purple grape that produces an earthy and full-bodied red.

“The Sunflower Red has a lot of concord grapes in it, so it has that familiar grape-y flavor,” Berggren says. “We think it will be a good tailgating wine, it has this nice sweetness that goes with barbecue.”

KC Wine Co. will also serve hard apple cider made with apples from Rees Fruit Farm in Topeka, Kansas. They haven’t bottled the cider, but instead will be making slushies – frozen hard cider with maple syrup, lemon juice, cinnamon and nutmeg.

At the grand opening on Saturday, they’ll have giant Jenga and bocce ball, along with a food truck, El Tenedor, and free samples. In the coming weeks, they’ll add meat (summer sausage) and cheese plates (think jalapeno cheddar) from Wiebe Dairy in Durham, Kansas. Going forward, the winery will be open from Thursday through Sunday and Berggren is looking to add farm-to-table dinners and acoustic acts on the weekends.

“We’d like to keep expanding. We’d like to be a Kansas City staple, where everyone has a bottle in their fridge,” Berggren says. “That’s a big dream, but we can do it.”