New restaurant will provide the community with healthy, local options 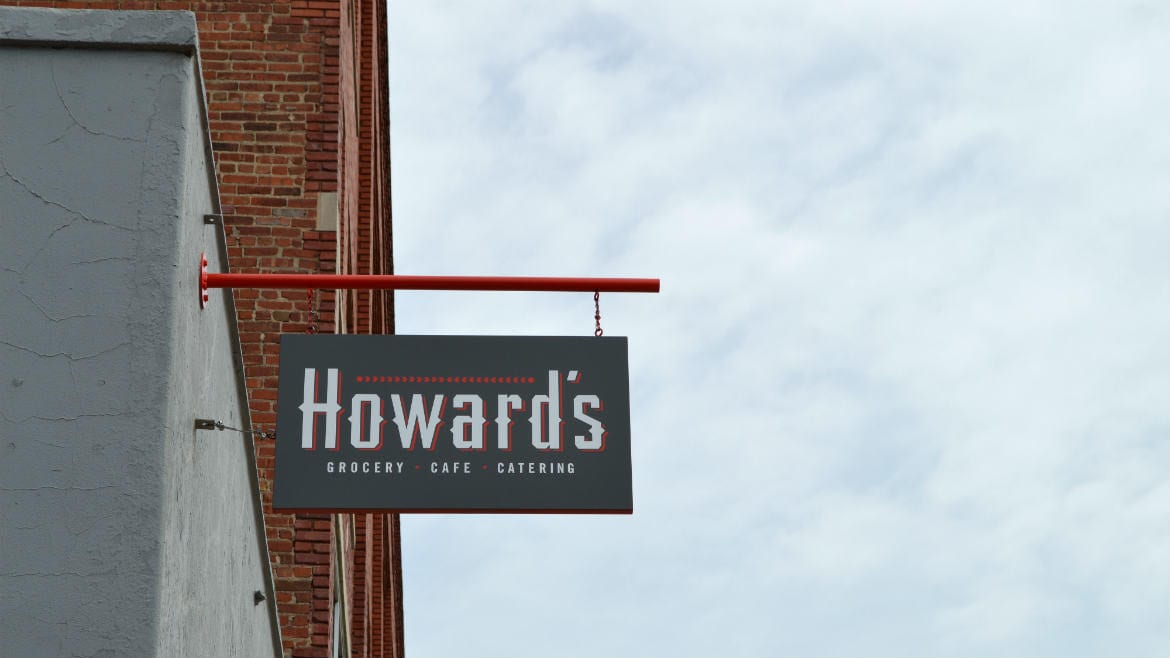 The front of the up-and-coming Howard's Grocery Store.
Share this story

The sidewalk ends in hard-packed dirt at 1708 Oak Street. There are triangle impressions left by the tires of earthmovers as contractors work on the courtyard in front of Howard’s – a new grocery and café concept from Craig Howard that is slated to open later this summer.

“This opens us up to a whole new clientele,” Howard says as he pulls on a door handle and hops over the space where the front steps will be installed. “We’re excited to serve a good lunch. I want everybody to come in and eat.”

For just over two years, Howard ran Howard’s Organic Fare and Vegetable Patch – an innovative members-only, honor system grocery store that melded the spirit of a farmer’s market and food cooperative in the former City Ice Arts building. For a yearly fee, members had access to the space and produce from three separate farm plots tended to by Howard via a keypad and lockbox. But when the City Ice Arts Building was sold in 2014, it marked an opportunity for Howard to expand his concept.

“We’ve really just spent the past two and a half years refining the idea. I think the grocery will get foot traffic and so much energy from the café,” Howard says.

Howard has been working to build out the space at Oak Street – owned by Julia Cole and Leigh Rosser – since last October. That month, he successfully ran a Kickstarter campaign that raised $13,760 and outlined the plans for the grocery and café, as well as a rooftop garden.

Last week, Howard hosted a party for his Kickstarter supporters to walk them through the space that just got a new kitchen hood installed and long common wooden tables for the dining room, which were made from an old deck by his stepfather. Howard is also working with the Urban Lumber Company to source and build shelves and a countertop out of hard maple and red oak wood.

The party marked the first time he was able to talk in the space about his vision for the café and menu.

“I’m trying not to be too chef-y and say we’re just going to put animal fat on everything or be a vegetarian or gluten-free restaurant,” Howard says. “I’m just trying to utilize what’s available locally.”

The cafe will be open for lunch only, but Howard is keeping evenings open for his catering business, which will also be housed out of the restaurant space. In an effort to speed things up, Howard plans to utilize Square to take orders online, which will then print directly to a printer in the kitchen. A prep table and oven are in the space to the right of the ordering counter and menu board – both opposite the front door.

Howard has centered his menu around a house burger made with two three-ounce patties. Each patty is a mix of 80/20 ground, grass-fed beef that will be pressed on the flattop like a diner. It will come topped with pickled seasonal vegetables, homemade American cheese (yellow cheddar, non-fat milk powder and gelatin) and a house burger sauce (sunflower oil and a bit of mustard) on a house-based potato roll.

“The burger is the anchor of the menu and everything needs to take less time than that,” Howard says. “People need to be able to come in and get good food fast and not worry about being late back to work.”

He’ll have another meat-filled sandwich, something like a tenderloin or BLT with heirloom tomatoes. Howard has also created a vegetarian version of his American cheese using tapioca starch, so he can serve up grilled cheese sandwiches. He’ll be pickling his own vegetables – he still has a hoop house on the West Side. And that pickle brine will be used in house mayonnaise and salad dressings.

Howard’s café will also rotate seasonal salads and soups on the menu. Right now, he’s considering a chilled tomato basil soup that he could serve alongside his grilled cheese. And he’s still deciding whether or not he wants to use lard for his French fries, though he knows he plans to soak, blanch, chill and fry them twice.

To drink, they’ll have house sodas—Howard has been experimenting with strawberry, orange and grapefruit syrups to mix to order with carbonated water—as well as Coca-Cola, Diet Coke and Sprite. And for dessert, he’s developing ice cream sandwiches made with chocolate chip cookies or rectangles of his flourless chocolate cake.

Howard is hoping to have his rooftop garden going this fall. He’ll mostly focus on different types of lettuces – in particular varieties that can handle heat and direct exposure to sun – along with peppers and tomatoes.

“We’ll use food that we grow ourselves. The freshest way to have salad is to grow it on the roof,” Howard says.

For the first few weeks, Howard’s grocery store will be open from Wednesday through Friday from 11 a.m. to 6 p.m. The café will serve lunch from 11 a.m. to 2 p.m. Grocery members will still have access 24 hours a day.

“That 24/7 membership model is fun and one of the main identities of our business. It’s about sharing and creating a community,” Howard says. “I think trust is important, but it will be a balancing act now that we’re open to the public. We’ll see what happens.”

Howard’s will also have what Howard is calling a ‘Food Share’ program, wherein customers can donate money to a given charity – the first partner will be the Kansas City Food Circle – over a several month period that culminates with a celebration dinner or something to that effect.

“We’ve been thinking about how the business can do something for the community. A lot of that has been me going somewhere and cooking,” Howard says. “This way we can focus on smaller organizations working on cool stuff.”

Hot Chicken Turns Up The Heat on Fried Chicken in KC